FACT-CHECK: Viral video on rice distribution shared by Dino Melaye was shot in 2019

Factcheck
By Olugbenga ADANIKIN On Apr 18, 2020 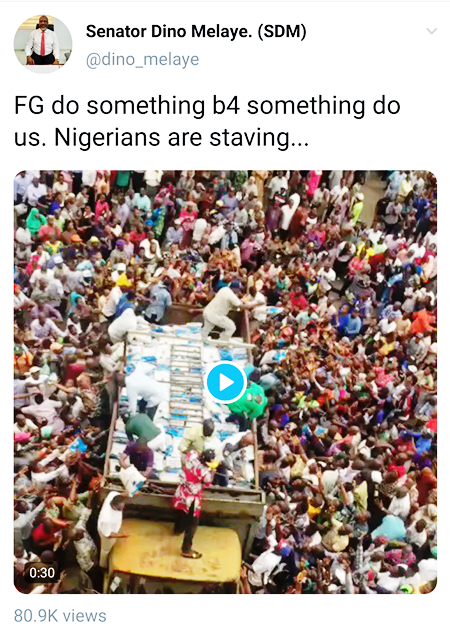 
ON Thursday 16 April, Dino Melaye, a former senator shared a 30-second video on rice distribution to a large crowd in Nigeria, which has gone viral.

The video was passed off as a representation of how food is distributed to Nigerians  during Covid-19.

Melaye, a member of the Peoples Democratic Party (PDP) tasked the President Muhammadu Buhari administration to rescue his citizens from hunger as they observe the compulsory lockdown, mainly in Abuja, Lagos and Ogun States.

“FG do something before something do us. Nigerians are starving,” Melaye stated in a caption to the video.

The President had initially ordered a 14-day lockdown three weeks ago in an effort to curb the spread of COVID-19 disease in the country. The directive was also extended by an extra 14 days on Monday, 13 April, in a national broadcast.

Meanwhile, the same video was uploaded on YouTube by a news platform known as MyNigeria and within 24 hours, it had over 10,000 views.

The video shared by the former lawmaker was shot in 2019 during the campaign of Babajide Sanwoolu, as governor of Lagos State under the aegis of the All Progressive Congress (APC) political party.

The earliest date the video came up on the social media was 1 March, 2019. 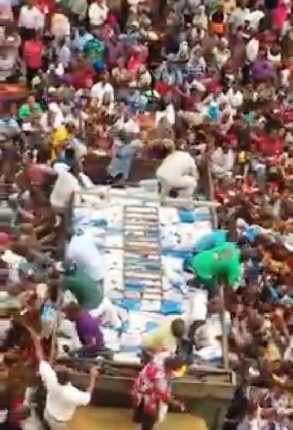 Picture of Melaye's claim reported in 2019 on Naija Daily 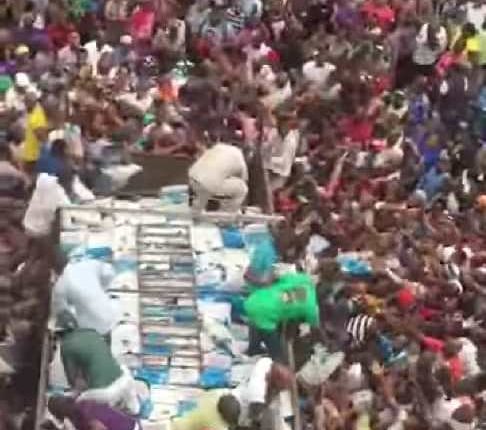 Picture of Melaye's claim reported in 2019 on Naija Gist 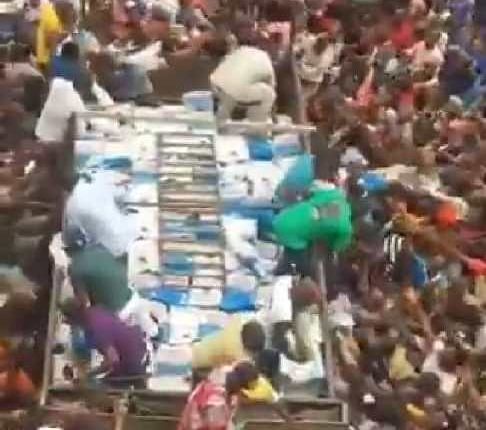 The ICIR found out that the same video was shared by Olika reporters on Saturday 2 March, 2019. On 8 March, 2019, the exact footage was also shared by Naijagist.

Beyond the two gossip media outlets, a different online news organisation identified as Naija Daily also published the video on 1 March, 2019 through their respective Facebook page.

Contrary to Melaye’s claim, the President ordered the release of 70,000 Metric Tons of food from the National Grains Reserve. The Federal Ministry of Agriculture and Rural Development (FMARD), hence released the grains to the National Emergency Management Agency (NEMA) from the silos spread across the country.

Therefore, the manner in which food was  distributed  in the video does not represent the federal government’s distribution palliative materials.

Bashir Ahmad, Personal Assistant to the President on New Media also faulted the claim attributed to the old video.

He described the viral footage as fake news meant to, “create more fears among Nigerians at a time of national emergency.”

However, Melaye had since deleted the video but the misleading footage is still trending on YouTube.

The former lawmaker has gradually gained some popularity for sharing false information.

In 2018, Melaye provided false information to the Police regarding a false claim of an assassination attempt by Edward David, former Chief of Staff to the Kogi State governor.

The claim eventually led to a lawsuit filed by the Office of the Attorney-General of the Federation against the lawmaker.

During 2019 election, Melaye was among notable social media influencers that shared false news. He tweeted a picture of a dead man covered in his blood, allegedly killed in Kano state due to electoral violence but the picture was of a 2017 incident that occured in Nairobi, Kenya.

Beyond these claims, Melaye had made other previous allegations believed to be untrue.

When he was being prosecuted at the Federal High Court, Abuja for the false information, he shared another false information that Ibrahim Idris, former Inspector General of Police wanted him dead.

He has also come under attack for his recent claim in the video about rice distribution which has turned out to be misleading.

Based on the available findings, the video footage shared by Melaye is not a representation  of how food is distributed during Covid-19 in Nigeria.

It was shot far before the outbreak of the pandemic in Nigeria.