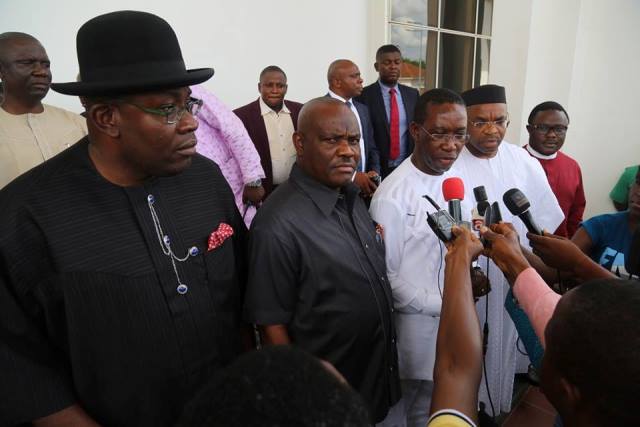 
Six governors from the Peoples Democratic Party (PDP) will travel to London on Tuesday to visit President Muhammadu Buhari, but Ayodele Fayose and Nyesom Wike, both of whom have been very critical of the federal government, were excluded from the delegation.

According to Punch newspaper, the delegation was selected by the office of the National Security Adviser (NSA)..

The six governors are drawn from the six geo-political zones of the country. Only the identities of Udom Emmanuel of Akwa Ibom State and Dave Umahi of Ebonyi State were made public in the report.

The governors are expected to have lunch with the President before returning to the country on Wednesday.

The report quoted a Governor who pleaded anonymity as confirming the development. The governor, however, expressed reservations about the people that were left out of the delegation.

“Our colleagues are going to London to see the President. But I’m not happy that someone like the Governor of Ekiti State, Mr. Ayodele Fayose, or his Rivers State counterpart, Mr. Nyesom Wike, is not on the delegation.

“Though there are PDP governors on the delegation, we know ourselves and also know those we know are truly part of the opposition and those close to the ruling All Progressives Congress.

“The governors had been directed to be at the Presidential Wing of the Nnamdi Azikwe International Airport, Abuja, tomorrow (Tuesday). From there, they will fly to the United Kingdom.”

Another governor, who spoke on condition of anonymity, confirmed the trip, adding that it was the idea of some governors from the All Progressives Congress (APC)..