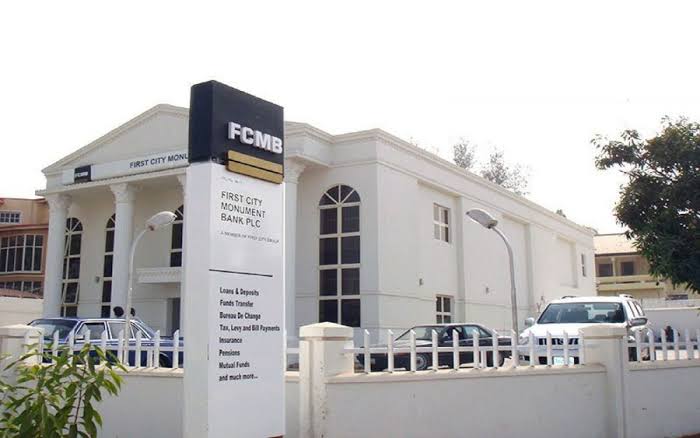 IN what appears to be a move to make undue gains from 41,000 Bauchi state civil servants undergoing verification exercise, First City Monument Bank (FCMB) Plc is extorting money from the government workers in the name of BVN print out, WikkiTimes has exclusively gathered.

The workers, who visited the bank to obtain their Bank Verification Number, BVN, in order to meet up the requirement of the Verification Committee set up by the Bauchi State government, were asked by officials of the bank to deposit N525 as condition to obtaining the BVN.

“If a customer fails to deposit the money, he or she will not be attended to,” said a visibly angry civil servant undergoing the verification exercise in one of the LGAs in Bauchi.

“When I visited the bank to obtain my BVN, I was told that I have to pay N525 before getting the BVN print out. If you have money in the account, they will just deduct the N525, and if one does not have, one is asked by the bank officials to deposit the money before you are even attended to,” said Hamisu Isa, one of the affected workrers.

Hamisu revealed that at the time he visited the bank to obtain his BVN, there were many of civil servants who had come there for the same purpose. “And I’m authoritatively telling you that all of us at the bank were asked to pay the same amount of money before obtaining our BVN,” he said.

He said he was surprised when he learned that it was only FCMB that was extorting the said money from the civil servants before allowing them to obtain BVN.

“If the officials of the bank realize that you do not have the money, they will require you to get out and look for alternatives before you are attended to,” said another civil servant who pledged anonymity.

“We were surprised when we discovered that it was only FCMB that was extorting money from civil servants. As for me, I had to borrow money from my friend to deposit the amount because I didn’t receive my October salary,” revealed another worker who was yet to be verified as at the time he spoke to WikkiTimes.

Another worker who identified himself as Hassan Isah said “when I visited the Bank to get my BVN, I was asked to see the bank manager, who referred me to where I can obtain the BVN, there, I was asked to deposit the N525 before they print it out for me. And you know, the bank manager will not stamp your paper if you didn’t pay the money,” Isah said. 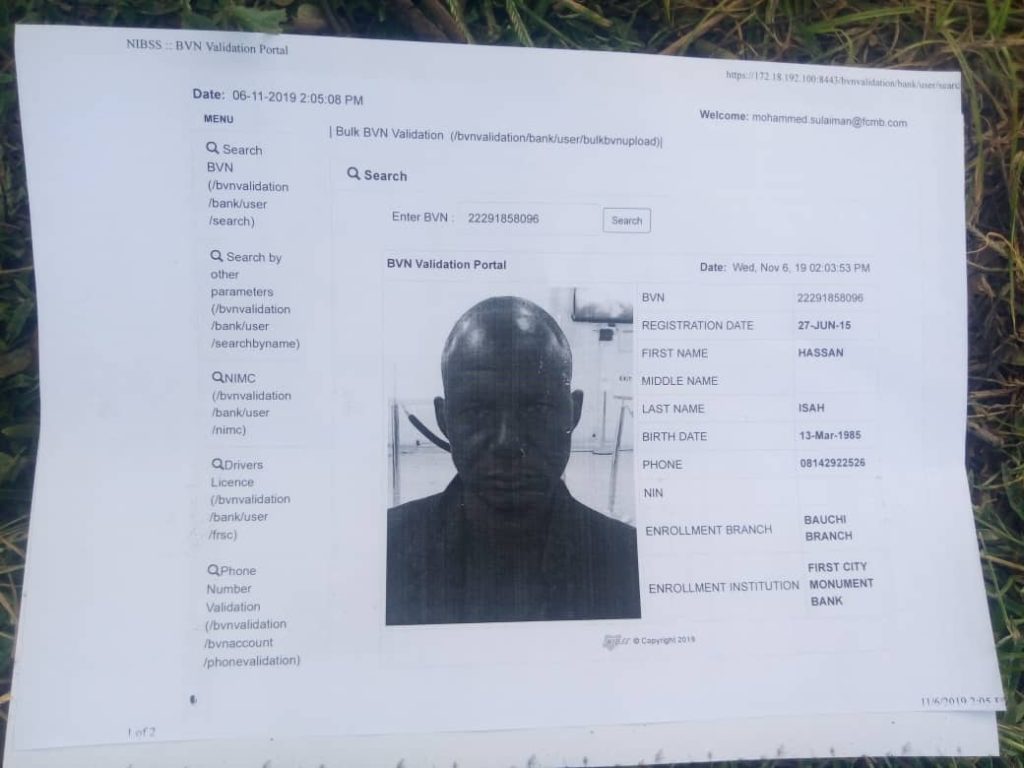 Isah who visited the bank on November 6, said that he had no money in his account when he was asked to deposit the N525.

“I had to beg my friend to transfer me N600 into my bank account before I got my BVN print out and stamped by the bank manager”.

But the committee set up by the Bauchi State government to verify the authenticity of the over 41,000 suspected ghost workers and pensioners on its payroll says it has not asked any of the affected persons to submit their BVN.

Speaking to newsmen in Bauchi, the Secretary of the Committee, IsiakaTijjani, said the government has not issued such directive to anybody, adding that the affected workers were doing that on their own.

“We are yet to start dealing with the affected workers individually, and may be they are doing that to equip themselves”, says Tijjani.

On the amount charged by FCMB, Tijjani said the fee was exorbitant.

But Isiaka’s claims that the Verification Committee did not asked civil servants to submit BVN print out is false.

On the October 21, 2019, the state government, through state’s Head of Civil Service, announced that over 41,000 civil servants from different MDAs may lose October salary due to their inability to have Bank Verification Number linked to their salary accounts.

“From the available records, it was discovered that total number of 41,448 staff were affected by this development with the following breakdown:

WikkiTimes recalls that on the 25th of October, 2019, the governor suspended all education secretaries, directors of Primary Health Care and their treasurers of all the 20 local government areas of the state.

In a statement, the state’s commissioner for information, Ladan Salihu,said the suspension was to enable the state government conduct investigation into the payment of salaries to civil servants without BVN.

The 17- member ‘authentication committee, whose terms of reference include investigating whether the over 41,000 staff being paid monthly salarries were genuine staff of the state, had 8 terms of reference that were categorical on BVN. The ToR explicitly requested workers to submit their BVN for verification.

It was a drama of some sort when WikkiTimes correspondent visited the two FCMB branches within Bauchi metropolis. The branch manager of the bank stationed at Murtala Mohammed Way, adjacent Bauchi state library, declined to comment and directed the reporter to the bank’s main branch around Jos Road of the city.

When our correspondent visited the main branch, he was directed to speak to the deputy manager who authoritatively said the charges were legal and that the bank’s policies were different from other banks’. The deputy manager who said his name was “FCMB Jos road” when asked by our reporter to mention his full name so that he could be quoted also said, “each and every commercial bank has its own policies or way of commission, as long as it is in line with the regulatory authority, as long as it has not violated any CBN or NDIC rule, then it has right to use its own policies.

However, when our correspondent sent a whatsApp message to the bank hotline, one Helen said “Kindly note that the cost is valid, as it is not free”

An email sent to the Bank has not been responded to 114 days after it was sent.

When this reporter called Diran Olojo, the Corporate Affairs Manager of the bank to get his reaction over the justification of extortion by some bank officials, he deflected the questions.

Rather he said: “Haruna today is Sunday, I’m sure everybody is having some downtime abi?

“Unless what you are calling me for is an emergency, why are we having this discussion right now?

Calls placed to him on Monday were neither answered nor returned.

However, a policy approved by the Central Bank of Nigeria, CBN, Guides to Charges by Banks and Other Financial Institutions in Nigeria which provided “basis for the application of charges on various products and services offered by banks and Other Financial Institutions (OFIs) in Nigeria to their customers” did not included charges on BVN printout.

The policy issued to all banks and other financial institutions in Nigeria on April 21, 2017 was categorical on the kind of charges banks were allowed to charge their customers.

For instance, section 10 of the policy which specified charges on electronic banking such as card maintenance fees, credit card charges, ATM withdrawals from other Bank’s ATMs exceeding 3 times within a month did not included charges on financial statements and BVN requests by customers.

The CBN’s prudential guidelines which addressees “various aspects of banks’ operations, such as risk management, corporate governance, and anti-money laundering/ counter financing of terrorism and loan loss provisioning” did not also allow banks to charge customers on BVN requests.

CBN did not respond to WikkiTimes’ FOI request for clarification

When WikkiTimes correspondent visited the Bauchi branch of the CBN to find out whether there’s a policy or law that allows commercial banks to charge money on BVN printout, officials at the apex bank asked our reporter to put his request in writing.

However, an official of the Customers’ Service unit of the bank who does not want to be named told our reporter that there is no any policy that allows banks to charge such amount. He said even if they were to charge, the said amount (N5,25) was too exorbitant.

When our correspondent could not get reply one week after he wrote to the bank requesting clarification, an official of the Bank identified as Yay DauduGiade (YauCbn) (Truecaller) said the Bauchi branch has forwarded the letter to Abuja as is the tradition of the bank.

He said it was only their head office in Abuja that was saddled with the responsibility to respond to WikkiTimes’ request.

One hundred and fourteen days since the letter was sent, the bank did not respond to WikkiTimes Freedom of Information request seeking clarification on the extortion, and FCMB had continued to extort the civil servants, many of whom had to borrow money to pay the charges since their salaries were not paid at the time of the verification.

The ICIR obtained permission from WikkiTimes to publish this report.

Allah, who gave me the leadership has destined to take it back — deposed Emir Sanusi speaks out