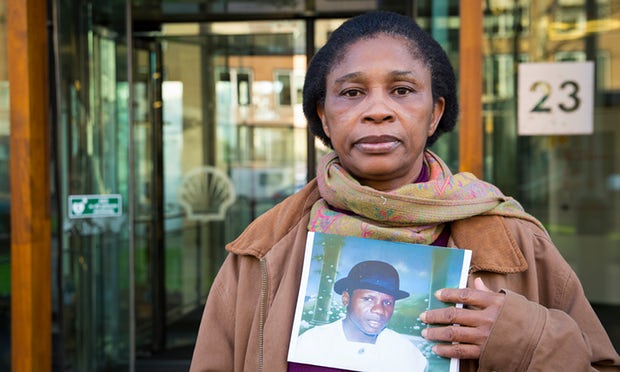 Four widows of men who were hanged along with Ken Saro-Wiwa in 1995 by Nigeria’s military government have launched a civil case against Shell in Netherlands, accusing the oil giant of complicity in their husbands’ execution, reports the Guardian UK.

Esther Kiobel, the widow of Dr Barinem Kiobel, and three other women served a writ in a Dutch court this week, following a 20-year battle with Shell.

Kiobel is bringing the case along with Victoria Bera, Blessing Eawo and Charity Levula, whose husbands were also executed. The women are seeking damages and a public apology for the role they allege Shell played in their husbands’ deaths.

Their husbands were executed along with the writer and human rights activist Ken Saro-Wiwa, and other men, who became collectively known as the Ogoni nine.

A military tribunal set up by Sani Abacha, the former Military Head of State, found them guilty of killing four Ogoni leaders who were against the peaceful protest they were leading against the pollution caused by Shell.

Following their execution, which attracted international outcry, Nigeria was suspended from the Commonwealth.

According to the Guardian UK, Amnesty International, which has supported Kiobel’s legal team, has accused Shell of complicity in the state executions.

“In a briefing published on Thursday, Amnesty alleges that Shell encouraged security forces and military authorities to stop the protests, even though the company knew this would lead to human rights violations,” the paper said.

“Amnesty also claims to have seen internal Shell documents proving that the company knew the trial of the Ogoni nine was unfair, and demonstrating that the firm was informed in advance that Saro-Wiwa was highly likely be found guilty.”

Shell has, however, branded the allegations “false and without merit”.

In a statement, Shell Petroleum Development Company of Nigeria Limited said: “We have always denied, in the strongest possible terms, the allegations made by the plaintiffs in this tragic case.

“The executions of Ken Saro-Wiwa and his fellow Ogonis in 1995 were tragic events that were carried out by the military government in power at the time. We were shocked and saddened when we heard the news of the executions.”

Does Rivers State have the highest number of unemployed…