AN investigative journalism nonprofit based in Nigeria, the International Centre for Investigative Reporting (ICIR), has pushed the envelope with its approach to investigating the country’s response to the COVID-19 pandemic.

In this interview with GIJN’s Africa Editor Benon Herbert Oluka, ICIR Executive Director Dayo Aiyetan discusses the team’s work. Aiyetan, an investigative reporter, newsroom mentor, and media trainer, will be speaking at Investigating the Pandemic: The Threat to Africa, a GIJN webinar, on Thursday, May 14 at 9 am EDT.

You have investigated the COVID-19 story for about six weeks now. What have been your most impactful investigations?

The first would be our data-driven report on cash transfers, which interrogated efforts to offer financial support to vulnerable families in Nigeria. The president had ordered that 20,000 Nigerian Naira (about US$51) be paid to the most vulnerable households, drawn from the National Social Register, a register of the poorest people in the country. But our investigation revealed that less than half of the vulnerable households on the register were receiving help from the government.

The data also showed the skewed nature of the distribution of cash as more households in states in the northern part of Nigeria were getting far more than households in the south … The government was forced to find a more equitable means of distributing palliative [food parcels] to reach as many Nigerians as possible.

Then there is our story about what doctors and other health workers earn as hazard allowance. In some places, doctors earned as low as N5,000 ($13.64) per month. We compared this with what doctors in other West African countries earned — $361 in Ghana, $460 in Sierra Leone and $825 in Liberia — and within weeks the state and federal governments reversed the situation.

For me, the report with perhaps the biggest impact is that which called out the minister of health, who overstated the extent of Nigeria’s preparedness to deal with a coronavirus outbreak. He visited one hospital in Lagos and declared that Nigeria was ready. The World Health Organisation (WHO), too, sang the same song. But our investigation revealed that Nigeria did not even have adequate isolation centers and was not prepared for the health crisis that the pandemic would bring. I believe that our calling out the minister informed the new government strategy… There has been more transparency in providing credible information to Nigerians and now the presidential task force on COVID-19 briefs the nation daily.

The COVID-19 story started as a health story before roping in all other reporters as it swept across the world. As an investigative unit with wide-ranging reports, how did your team cover issues around COVID-19 that would have an impact?

The ICIR runs a small newsroom. We do not have reporters in the states, only in the capital Abuja. And there was a lockdown. Every journalist reported from their different location so we were able to get a broad view at least of what was happening in the whole of the Federal Capital Territory.

But we were not covering stories around the country and there was a lot going on. So we reached out to journalists in other newsrooms that we had worked with on our funded investigative projects to report for us on specific projects… and jointly published. We did this particularly in the early days to report on state responses to the pandemic and unearthed a lot of initial mismanagement of responses, denial, and cover up of COVID-19 cases.

Could you share with us some of the investigations you’ve done during the lockdown and explain how you were able to pull them off?

The story on prison congestion and the risk of an outbreak of the pandemic in prisons, called correctional centers in Nigeria, was done through undercover reporting in at least one prison. I cannot speak about the details, but our reporter got into Maiduguri Maximum Security Prison and was able to paint a picture of what could happen in the facility if [overcrowding wasn’t alleviated] and if protective equipment was not provided to the prisoners.

The interesting thing is that an official of the state government who had followed some of our reporting on the pandemic reached out to us all the way from Akwa Ibom State to provide information about what was going on. As we had no reporter there, we got a trusted journalist to do the report, giving him access to our source.

One of the biggest challenges for journalists covering COVID-19 has been the reliability of figures. Have you had instances where you and your team faced this challenge? How were you able to overcome it?

The example that readily comes to mind is the story we ran on the social register of the poor. The government had refused to give exact figures about the number of households and many people — including journalists — were quoting all kinds of figures that could not be verified. We were fortunate. We kept looking and eventually found a source in the right place who provided the data in a government document. Once we verified that the document was authentic, we ran with the figures and the government could not deny it.

What have been the greatest challenges that you’ve faced while doing investigations during the pandemic?

I believe it is the frustration we have faced reporting from the front line, particularly in hospitals and isolation centers. We wanted to tell the story of our health workers and how they cope treating COVID-19 patients, what welfare packages they enjoy, if they had adequate personal protective equipment (PPE) and medical equipment to work with. However, the government refused to give us access. We can understand that the government would not want the truth about some of the inadequacies in our treatment of COVID-19 patients to come out but these are stories that need to be told.

Another challenge has to do with covering stories of human right abuses during the lockdown. Because most of our journalists do not have cars we are sometimes limited in the scope of stories we want to cover. But we quickly learnt a few lessons and adapted.

Are there particular tools and resources that have aided you and your team in your effort to carry out investigations during the pandemic?

Sometimes, the tools could be as simple as apps such as Twitter or [smartphone app] Truecaller… and Wayback Machine. For some of our verification stories — and there have been loads — we have used TinEye and Google’s reverse image search. In the early days of the pandemic and after the lockdown and airport shutdowns, we used Flightradar24 for tracking flights. For example, while investigating the whereabouts of Abba Kyari, the former chief of staff to the president of Nigeria, who died from COVID-19, we used it to try to get the dates he flew out of Abuja and where he had gone. [Editor’s note: He died later that month.]

What have been the missed opportunities for investigative journalists that you would want them to keep in mind going forward?

Using data not only to make government accountable, but also to set the agenda, and influence government policy. For example, the government eased the lockdown in Nigeria at a time when infections were rising. Journalists should put such government action in context through what data says. At the ICIR, we are now tracking the data of infections and doing stories showing whether the ease in lockdown regulations makes sense or not. 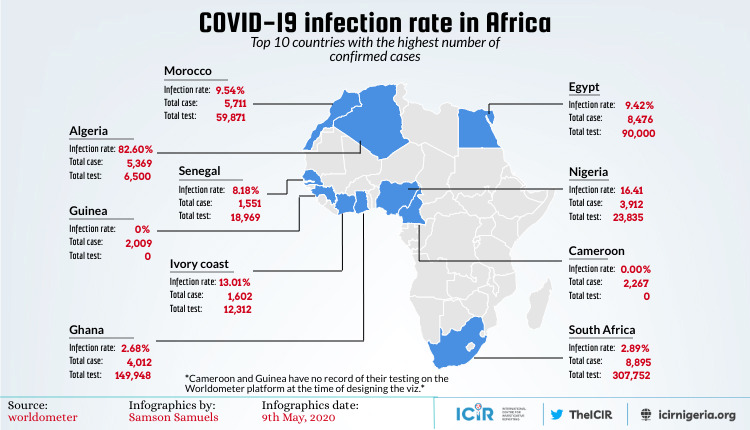 Also, I do not think journalists in Nigeria are using data enough to set [the] agenda in the areas of health, education, infrastructure, etc. One of the stories we want to do at the ICIR is to look at the education data, particularly dealing with the number of schools and children in schools. We want to force the government to start thinking of the future when schools should resume. We want to use this data to project how many more schools the government needs to build, because our kids need to observe social distancing when they return to school. Journalists can use data…. like this to set the agenda, to influence policy in virtually every facet of the economy.

On World Press Freedom Day you said journalists and media organizations must innovate in order to adapt and survive after the pandemic is brought under control. What kind of innovations do you have in mind?

Journalists must learn new, cost-effective ways of telling stories, particularly using technology. Today’s investigative reporting work — in fact, any kind of journalism — is driven by technology and journalists must embrace tech tools and not rely on old, traditional methods. So, instead of pounding the streets looking for sources, data or documents, we should learn that a whole lot of this we can get online.

This interview is published with permission from Global Investigative Journalism Network.

Children hawk facemask in FCT to survive during lockdown