THE Independent Corrupt Practices and other related offences Commission (ICPC) has honoured Daniel Amah, a policeman who rejected a $200,000 bribe, with the 2022 Public Service Integrity Award.

Amah, presently serving as the divisional police officer of the Bompai police station in Nasarawa local government area of Kano State, is an indigene of Jos East, Plateau State.

The agency said, “After a bank staff confirmed the availability of the money at the bank to the victim, the transaction took place.

“However, the suspect arranged with armed robbers to track and rob the victims while transporting the money.”

The agency said during investigation, its operatives traced the principal suspect, Zaki, who offered $200,000 to Amah, to kill the case through a bank staff.

According to the ICPC, the offer was rejected, and the bank staff was promptly arrested, which led to the arrest of the suspect, and the $200,000 was recovered and registered as an exhibit.

The award ceremony occurred at the 4th National Summit on Diminishing Corruption in the Public Sector organised by the ICPC. It was held at the State House Press Conference in Abuja on Tuesday.

The Special Guest Honour at the event, President Muhammadu Buhari, congratulated Amah for the deed that earned him the award. 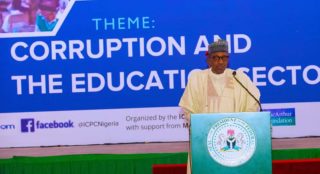 The President noted that corruption in the expenditure of internally-generated revenue of tertiary institutions had not received due attention from stakeholders.

On the ongoing strike by the Academic Staff Union of Universities, which has entered its eighth month, Buhari said corruption in the education sector was undermining the Federal government’s investments.

He challenged the notion that the constant strikes, especially by unions in tertiary education, often indicated gross underfunding, saying “those who go on prolonged strikes on flimsy reasons are no less complicit.”

He urged stakeholders to advocate transparency in the IGRs of educational institutions and how such funds are expended.

Buhari said, “This year’s summit will mirror how corruption undermines educational policies and investments, and creates an unfriendly learning environment for our youths.

“Incessant strikes, especially by unions in the tertiary education, often imply that the government is grossly underfunding education, but I must say that corruption in the education system, from basic level to the tertiary level, has been undermining our investment in the sector and those who go on prolonged strikes on flimsy reasons are no less complicit.

“The 1999 Constitution places a premium on education by placing it on the Concurrent List, thereby laying the responsibilities of budgeting and underwriting qualitative education on both the Federal and State Governments.”

He argued that monies disbursed to the education ministry did not reflect the totality of the government’s allocation to the sector and should not be construed as such.

The President also noted the need for closer scrutiny of funds used by tertiary institutions, decrying what he called an “over-bloated payroll” in many schools.

Buhari noted that the government could not fund education alone and tasked academics to attract endowments, research and other grants to universities.

Buhari said this year’s edition of the summit would mirror how corruption undermines educational policies and investments, and creates an unfriendly learning environment for our youths.

In his submission at the event, themed, ‘Corruption and the Education Sector in Nigeria’, the keynote speaker, Attahiru Jega, revealed that none of the government ministries, departments and agencies evaluated attained full compliance.

Jega noted that out of the 260 MDAs assessed based on their administrative systems, only 61 had substantial compliance.

He recommended that the Federal government implement consistent reforms and upgrade its digital revenue and payment platforms, including the TSA, GIFMIS and IPPIS, to safeguard them from the activities of hackers.

He said, “Nigeria has, unenviably, been dubbed as one of the most corrupt countries in the world. It is also said to be one of the world’s ‘most complex corruption environments and perennially ranks in the bottom quartile of Transparency International’s Corruption Perception Index (Page, 2018:1).’ Nigeria’s 2021 rank is 154 out of 180 countries, with a score of 24 over 100 (transparency.org).

“This relatively very poor record and ranking are essentially on account of the humongous corruption associated with the Nigerian public sector, especially at the federal level, but also across all tiers of governance in the federation.”

He noted that a lot had been said and done, commendably, since 2015 to tackle the monster of corruption in the public sector, but a lot more still needed to be done.

“Seventy-four per cent of public sector education institutions in Sub-Saharan Africa are affected by petty corruption (etico.iiep.unesco.org). Extortion of money from students/parents for admission also takes place,” he said

He added that corruption in the education sector cannot be solved in isolation and suggested that strategies for its resolution would necessarily have to be in the context of a comprehensive grand strategy for addressing corruption in the broader public sector.

In his welcome address, the chairman of the ICPC, Bolaji Owasonoye, commended the president for his support of the agency.

Owasanoye highlighted the different corruption methods in the education sector.

“Corruption in education manifests in different ways such as recruitment of unqualified or unfit persons to teach at primary, secondary or tertiary levels; admission racketeering, examination malpractice, diversion of revenue for and within the sector, operation of illegal academic institutions, especially at the tertiary level; abuse of power, and procurement rules by management and governing councils both of educational or regulatory institutions.

He said the ICPC had escalated its prevention mandate in the face of costly, time-consuming and unpredictable investigation and prosecution outcomes.

He said, “In this regard, we are strengthening the Anti-corruption and Transparency Monitoring Unit (ACTU) in MDAs.

Owasonoye added that the agency had collaborated with other institutions, including NUC and NBTE, and much more recently with JAMB to co-host the event.

Also in attendance at the occasion were the Minister of Education Adamu Adamu, Secretary to the Government of the Federation Boss Mustapha, and Registrar of the Joint Admission and Matriculation Board, Ishaq Oloyede.

Chat us on WhatsApp
Advertisement
Previous articleIPC condemns attack on journalist, seeks goverment intervention
Next articleIn Bauchi, FG’s BHCPF is rescuing vulnerable Nigerians, but many are yet to benefit