A report by Buzzfeed and the Digital Africa Research Lab (DigiAfricaLab) has exposed how some Nigerian Twitter influencers, including a public relations firm owned by popular social media influencer Japhet Omojuwa and other organisations ran a campaign in support of Alex Saab, an alleged money launderer for the Nicolas Maduro-led Venezuelan government, who is currently fighting extradition to the United States from Cape Verde.

A #FreeAlexSaab hashtag began amongst Nigerians on Twitter in mid-January.

According to the report, the hashtag became a rallying cry that seeks to allegedly influence the ongoing court proceedings against Saab in Nigeria and Cape Verde, the African island nation where Saab is currently under house arrest.

Buzzfeed News said more than 1500 accounts were suspended in response to the investigation it was conducting with Digital Africa Research Lab that was manipulating the #FreeAlexSaab hashtag.

Saab is a Colombian businessman arrested by the Cape Verdean government based on an international arrest warrant purportedly issued by Interpol at the United States’ request.

He was in 2019 charged with money laundering by a United States court. He is alleged to have helped Nicolás Maduro evade sanctions via fuel and gold trading.

Saab was arrested on June 12, 2020 when his plane stopped to refuel at Amilcar Cabral International Airport on the Island of Sal by the Cape Verdean government enroute Iran from Venezuela.

Venezuelan authorities have continued to call for Saab’s unconditional release, adding that he had diplomatic immunity when he was arrested.

The Economic Community of West African States (ECOWAS) Court had, in a ruling it gave on the 20th of December, 2020, ordered the Republic of Cape Verde to place Saab under permanent home detention in good conditions, including access to medical treatment and visits.

According to the report, the campaign involved Alpha Reach, Omojuwa’s PR firm, and a UK-based nonprofit called Digital Good Governance for Africa.

DIGA is a UK nonprofit led by Naji Makarem, an international development professor at University College London, and Christian Elemele, a Nigerian expat and social entrepreneur who previously studied at UCL. Founded in 2019, it is currently working on a project to bring digital voting to Nigeria for the country’s 2023 elections.

Christian Elemele’s  profile on the restornaija campaign website states that he is the Co-Founder and Executive Director of Digital Good Governance for Africa (DIGA), an economic development professional providing consultancy and advisory services in private emerging markets through critical data, insight and analysis to global and specialist markets to top Investment funds in the DACH region consisting of Germany, Austria and Switzerland at Euromoney Institutional Investor.

Effort to contact Makarem to get his reaction to the report proved abortive as two messages sent to his email were not responded to. 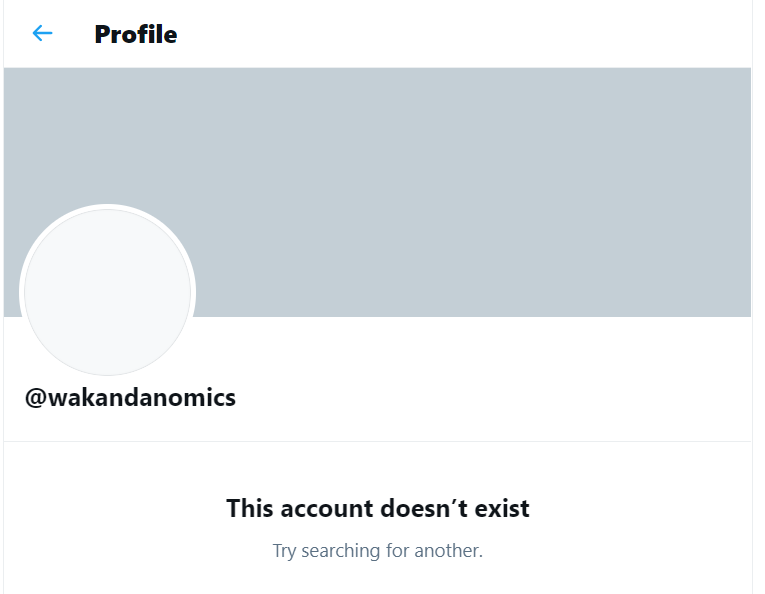 BuzzFeed News said after it reached out, Elemele’s photo was removed from the @wakandanomics account and it appeared to have been deactivated.

The ICIR sent a message to five of those reported to have participated, but none responded as of the time of filing this report.

In the report, Buzzfeed News said DIGA, on its letterhead, produced a Saab campaign briefing document that outlined a social media campaign that would recruit influencers in Nigeria, Ghana, and Senegal to tweet in support of Saab and help generate public outcry about his case. It said participating influencers were expected to post twice per week for the initial one-month campaign, from Jan. 18 to Feb. 18.

“The influencer is expected to use the hashtags #FreeAlexSaab and tag prominent Nigerians, Ghanians and Sengalese handles from government, business, celebrities, activists etc. which will be provided to the influencer,” the five-page document reads.

It instructed influencers to engage with replies to their posts about Saab and to tag the @wakandanomics Twitter account if they needed additional information. That account does not list a full name but used a photo of Elemele as its avatar. Elemele is also the co-founder of a nonprofit called Wakanda Social Enterprise.

By Jan. 20, the hashtag #FreeAlexSaab was gaining steam on Twitter, thanks to Nigerian accounts that often tweeted the same articles and images, tagged the same accounts, interacted with one another, and expressed unwavering support for Saab. The tweets intensified in March as the Court of Justice of ECOWAS, based in Abuja, Nigeria, prepared to rule on his case. It decided in Saab’s favour, but the case continues in Cape Verde.

The report stated that five sources with knowledge of the Saab campaign said that 40 Nigerian influencers, with more than a million followers in total, were recruited to participate by at least two employees of Alpha Reach, a PR firm run by Japheth “JJ” Omojuwa. Omojuwa, a prominent Nigerian influencer with 1 million followers on Twitter, was listed in the DIGA document as one of the people the campaign hoped to recruit.

Alpha reach did not respond to an email and text message sent to the company official email and phone number listed on the company website.

But Buzzfeed news, in an interview with Omojuwa, stated that “a friend in the UK” connected to the Saab campaign contacted him, and that he declined to participate — aside from posting a few supportive tweets.

“I said to this person in confidence that I support the mission and would be happy to retweet a couple of articles, but I would not personally be part of it,” he said. Omojuwa cited his “strong relationship” with the US Embassy in Nigeria as a reason why he did not want to be seen as advocating for Saab’s release, but he said it was “possible” employees at his firm worked on it.

“I don’t think I can start to have a conversation about whether Alpha is involved. If they are, there have definitely been some form of nondisclosure [agreements],” Omojuwa said.

But a researcher at the Digital Africa Research Lab Rosemary Ajayi said Alpha Reach employees participated in the campaign by tweeting about Saab and engaging with the influencers they helped to recruit and pay.

“They retweeted each other and developed threads around each other’s tweets using replies and quote-retweets,” she said. “They also shared news articles and attempted to draw in unsuspecting subject matter experts by tagging their handles and asking questions.”

Two unnamed Nigerian influencers on Twitter, according to the report, said Alpha Reach employees paid them to tweet about Saab, share specific content and hashtags, and tag a set of accounts in their tweets.

Influencers were typically paid between $6.50 to $15 for their work, though some received more, according to sources.

Another influencer said an Alpha Reach employee told them to tag accounts, including those of Venezuelan political leaders. “What was mentioned was that [people] would be monitoring accounts participating for retweets and amplification,” the influencer said.

A Nigerian influencer Pamilerin Adegoke, who participated in the campaign, told BuzzFeed News in an interview that an unnamed friend asked him to tweet in support of Saab. He said he paid people to engage with his Saab tweet “to drive traffic to the post for more people to see it, basically,” but claimed he was not paid to participate.

Alpha Reach, the alleged Saab campaign centre company, also got into another hot water after Former education minister, Obiageli Ezekwesili threatened to sue Omojuwa, for unauthorised use of her identity as a director in his company.

Apart from Ezekwilisi, others listed on the company’s directors include: Kaduna State Governor, Nasir El-rufai, Damilola Ogunleye and Japhet Omojuwa.

A check by The ICIR on NG-Check.com, a platform that provides information on Nigerian companies, has Ezekwesili on the list of Alpha Reach’s directors.

The former minister, in a letter sent to Omojuwa by her lawyer Marshal Abubakar, on behalf of the law firm of human rights lawyer Femi Falana, dated April 9, 2021, and titled: ‘Complaint over fraudulent use of the name of Mrs Obiageli Ezekwesili as a Director of the Alpha Reach Limited RC no: 1066507 Incorporated in 2012 Demand for Full Disclosure and Public Apology,’ said their investigation revealed that Ezekwesili was listed as a director when the firm was incorporated in 2012.

Ezekwisili’s lawyer said she was unaware of her name was listed as part of the company’s directors until a Buzzfeed reporter contacted her. She said Omojuwa neither sought her consent nor obtained the requisite incorporation document and information that the CAC would require to process the registration.

She also requested in the letter sent, a public explanation and apology from Omojuwa for allegedly enlisting her as a director of his firm without her permission and approval.

The letter read in part, “On March 30, 2021, someone from Buzzfeed reached out to our Client, informing her that she was listed as one of the Directors of Alpha Reach Limited alongside Nasir El-Rufai and Japhet Omojuwa, our Client who was certain that she has never been involved in incorporating any company with you and/or Mallam Nasir El-Rufai promptly informed the Buzzfeed official so.”

“Moments later, the official forwarded the form CAC7 documents to our client corroborating her claim.”

“It is our brief that our Client promptly contacted you but you informed her that the Alpha Reach Company Limited is your company and that she is not involved in it at all.”

“Our client also requested for the incorporation documents from you and you promised to make the same available to her within a week but you never did.”

The ICIR effort to contact Omojuwa proved abortive as a message sent to his Facebook was not responded to.

But Omojuwa’s company, Alpha Reach, in a message posted on its official Twitter account, denied the former minister as being part of the company directors despite public record showing she is listed.

The company also denied being part of the Alex Saab campaign, stating that it had no link with the campaign’s accounts.

“Alpha Reach, as an organisation, was not involved in the campaign making the rounds. And neither did any Alpha Reach staff pay anyone on behalf of Alpha Reach. The speculation that the company was involved in the campaign is therefore not true. We are also aware that Twitter cleared accounts associated with the said campaign. It is pertinent to note that none of those accounts had any link or affiliation with our company.