In new video, Chibok girls say they will never return home — ‘by the grace of Allah’ 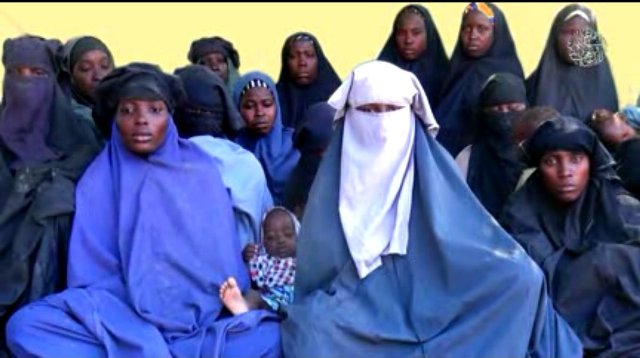 Boko Haram has released two video clips, one of which featured some teenage girls describing themselves as part of the schoolgirls kidnapped from Government Secondary School, Chibok, Borno State, in April 2014.

According to Ahmad Salkida, a journalist with deep-rooted knowledge of the insurgency and the sect, the second video clip showed wreckage of a military helicopter, as well as other military tanks, gun trucks and a drone that the insurgents say they had destroyed.

Salkida had earlier said that he had information that the insurgent group were planning to release the video clips.

“Shekau in new video says he is not tired. Chibokgirls said, they are not returning home. Terrified ‘policewives’ appealed to be rescued,” Salkida tweeted.

Just In: Shekau in new video says he is not tired.
– Chibokgirls said, they are not returning home.
– Terrified ‘policewives’ appealed to be rescued. More details soon. pic.twitter.com/J3YAtPcVB6

In less than 24 hours, Boko Haram has released two videos. These are the screen photos of the second video. More details on Sahara Reporters. pic.twitter.com/dq8SbI8Biy

“The video did not, however, show the actual time the group claimed to have hit the aircraft, but showed the debris of the aircraft and that of several other destroyed military tanks, trucks and a drone, following what Boko Haram claimed, was the aftermath of a week long battle with the Army.

“The group fighters, as seen in the video, mostly underage boys, were brandishing different types of sophisticated weapons haphazardly as they defend their turf from the unrelenting push by the Army.”

Channels Television quoted one of the girls that spoke in the video as saying that they would not return home because they were being treated well and have all they need.

“We are the Chibok girls…. By the grace of Allah, we will not return to you. We live in comfort. He (Shekau) provides us with everything. We lack nothing,” the girl was quoted as saying.

Part of the video clip, lasting 22 seconds, was shared by Sahara Reporters on Twitter. It showed one of the girls calling on Nigerians and their parents to “repent and come worship your creator”.

This is the first time the Boko Haram group would be releasing a video since May 2017. Their last video featured an AK-47-wielding girl who claimed to be one of the Chibok girls, saying that she would never return to her family.