THE National Biosafety Management Agency (NBMA) headed by Dr. Rufus Egbegba has spent over N365 million on vehicles, computers, and equipment, all between 2016 and 2019, among other procurements. The ICIR’s investigation, however, revealed that the prices quoted for these items are inflated beyond the market price.

NBMA was established by the National Biosafety Management Act of 2015 and on April 15, 2015, Dr.  Egbegba was appointed as the pioneer Director-General/Chief Executive Officer but the agency commenced full operation in 2016.

In the last four years,  the agency has executed no fewer than 30 capital projects, but all at inflated prices, according to the document obtained from NBMA through FOIA request. 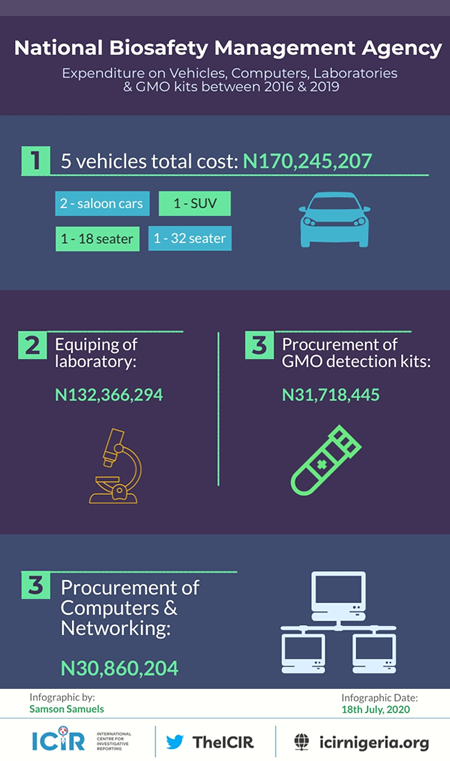 For instance, The ICIR’s check shows that the agency has spent over N170 million on only five operational vehicles between 2016 and 2019.

The breakdown of the spending shows that N40 million, exactly 40 percent of the money released to NBMA for capital projects in 2016 was spent on the procurement of operational vehicles.

In the following year, another sum of N48,890,100 was also awarded and paid for the same project. 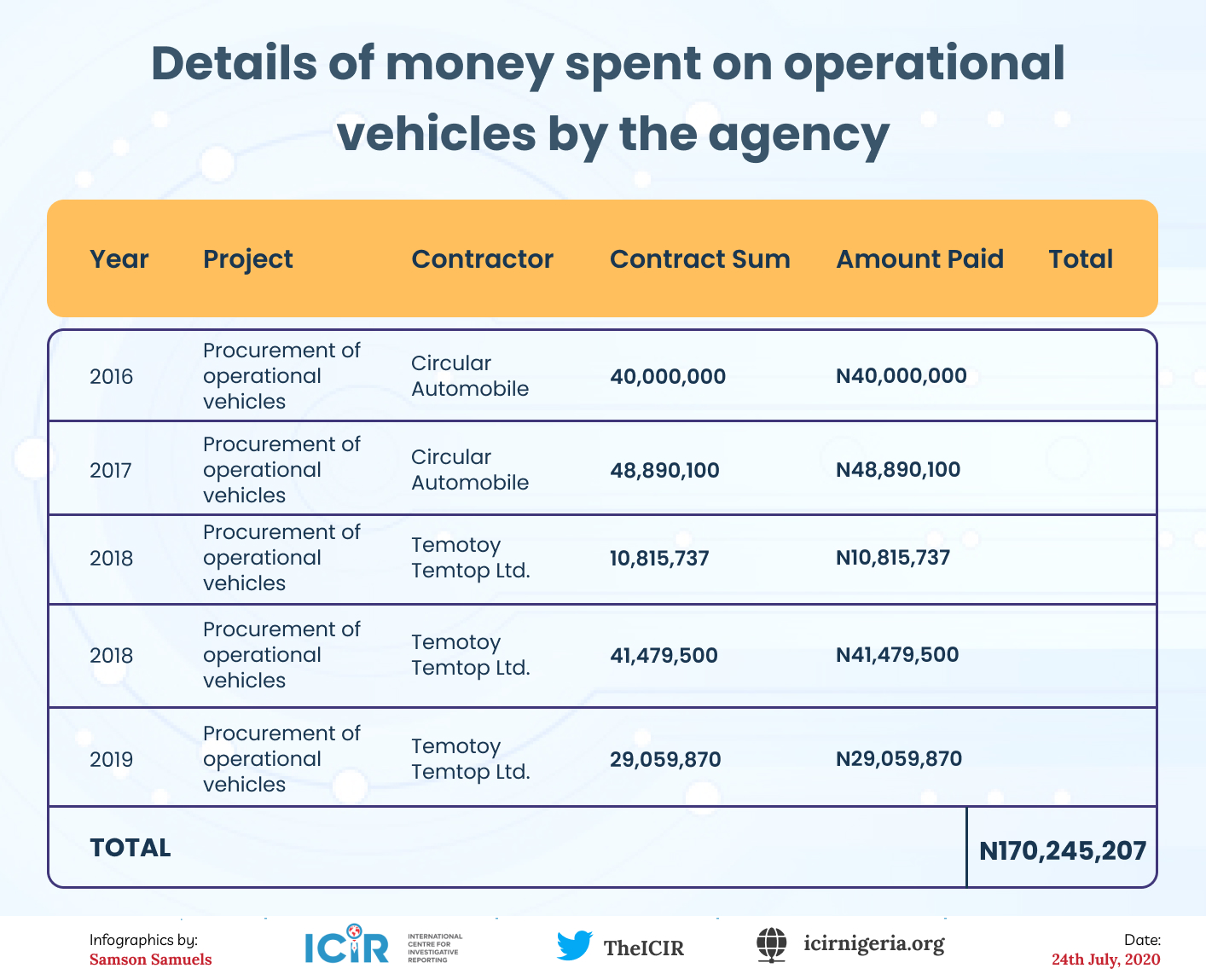 When Dr. Rufus Egbegba, DG of the agency was contacted by The ICIR for clarifications on the money spent on vehicles, he acknowledged the purchase of the five vehicles at N170.2 million and listed the vehicles as 32-seaters bus (One), 18-seaters bus (One), Saloon cars (Two), and SUV car (One).

The ICIR further asked him if he thinks those vehicles were not procured at an inflated price, and he responded: “That’s all the vehicles we have bought and if from your investigation you’ve realized we’ve spent N170,245 207 on the five vehicles, then that’s the amount we’ve spent,” Egbegba responded.

When The ICIR reached out to one of the two contractors that got the contract for the procurement of operational vehicles for the agency ― Circular Automobile Limited, who was awarded the sum of 40 million and 48.9 million in 2016 and 2017 respectively, their director who decided not to disclose his name to this reporter noted that it was true that his company got the contract to supply two vehicles to the agency between the year 2016 and 2017.

He stated further that he delivered two brand new vehicles ― one 18-seater HiAce bus and one Prado car to the agency.

When asked if he received in total a sum of N88.9 million for the project from the agency, he stated instead that only ten percent for tax and VAT were deducted from the money and that the agency paid him fully for the contract. This implies that a sum of N8.9m was deducted for VAT while N80m was remitted to the contractor.

The second contractor who was also commissioned to supply operational vehicles could not be reached, but from the information gotten from the Circular Automobile Limited that a sum of N88.9 million was spent on two vehicles, it is conceivable the agency spent the remaining N81.4 million on the three remaining vehicles ―one 32-seaters bus and two saloon cars.

It is, however, curious that NBMA would buy vehicles through middlemen when they could directly buy from the licensed Toyota-car dealers in Nigeria, and saved the agent’s mark-up.

There are seven of such dealers in Nigeria. They are Elizade Nigeria Limited, R.T. Briscoe Plc, Omoregie Motors, Germaine Auto Centre, Mandilas Enterprise Limited, Kojo Motors and Metropolitan Motors, but NBMA did not purchase vehicles from any of them.

The  market price of the vehicles

Considering that that the 18-seater buses and the SUV  Prado were bought between 2016 and 2017, the highest amount that could have been paid for the two vehicles were N65 million as against N80 million reportedly paid for the two cars. That leaves a difference of N15 million.

Even if  the two vehicles were purchased at the current market price, with unstable inflation and foreign exchange considered, the going price of automobiles could still have been lower than the price quoted by NMBA.

The ICIR reached out to RT Briscoe, one of the licensed Toyota car dealers in Nigeria, who indeed confirmed that there has been inflation in the price of vehicles in recent years, which makes the current market prices pretty higher than the prices when the two vehicles were bought.

He also stated that there are different variances for each of the vehicles the agency purchased.

He said for the 18-seater Hiace bus, the price ranges from N22 million to N26 million, depending on the variance.

He said further that the 32-seaters coaster bus is currently being sold for N48 million while the current market price of the SUV Prado car ranges from N32 to N50 million, depending on the variance.

He concluded that although there are different types of saloon cars, the price varies, depending on the brand, noting that the average price for a typical saloon car ranges from N15 million to N30 million.

Going by the prices quoted by the RT Briscoe,  it is evident that even if the cars were bought at the current market price, there are still discrepancies in the money the agency claimed to have spent on these vehicles.

For instance, the highest amount an  18-seater Hiace bus could be purchased now is N26 million while the price of SUV Prado car goes for N50 million, which means both vehicles could be purchased for the total amount of N76 million, this is against the sum of N80 million the agency claimed to have paid to the contractor for this project. In essence, it means the agency cannot account for a  minimum of N4 million in the course of procuring these two vehicles.

Also, since the second contractor ― Temotoy Temtop Limited that was contracted for the purchase of the three other vehicles could not be reached by The ICIR, it is difficult to establish the type of vehicles and the amount the agency paid in purchasing these vehicles.

Apart from the five operational vehicles ostensibly bought at the market price, findings revealed that the agency has so far spent N164,084,740 on its laboratory.

In 2016 when the agency started operation, half of the agency’s budget fixed at N50 million was spent to purchase and equip its laboratory for GMO detection and analysis.

In 2018, N32,747,205 was also expended on the same budget line – procurement and equipping of laboratory for GMO detection and analysis.

This implies that in the space of three years, the NBMA has spent N132,366,294 to equip its GMO laboratory which is housed in an office container.

Findings revealed that despite not having budgetary allocation for equipping the makeshift GMO laboratory in 2019, about N9 million was spent on the same project to procure GMO detection kits in the same year.

This further implies that the agency has spent in total N164,084,740 to procure equipment for the GMO laboratory and GMO detection kits.

When The ICIR visited the agency on July 8, it was observed the laboratory is a sparsely-equipped mobile facility, though it is difficult to evaluate the worth of the laboratory on which  N164 million already has been expended, according to the document shared with The ICIR. 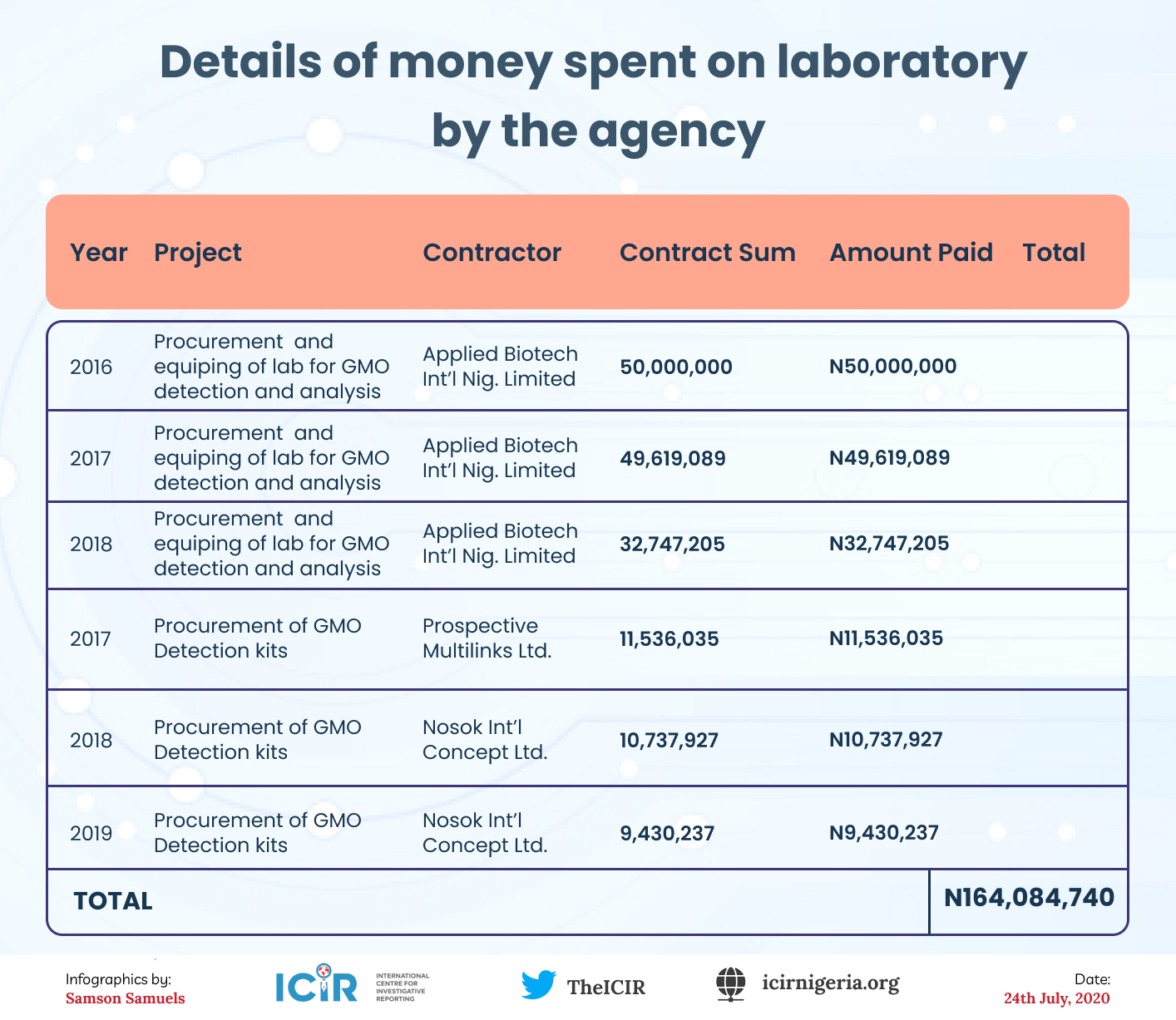 The ICIR asked Egbegba, the agency’s DG to account for how the money was spent. He agreed to findings by the reporter as being correct and that he has no further explanation to make rather, to even solicit for more funds for the agency.

“If those amounts are what is written in the report gotten by you, then maybe it is correct,” Egbegba said.

He argued that the equipment in the agency’s laboratory is the best in the world and that’s why the agency expended such a huge amount of money on them.

“You see that equipment in our laboratory, they are the best you can see anywhere in the world,” he noted.