Many election promises of Donald Duke and Tope Fasua (part 3) 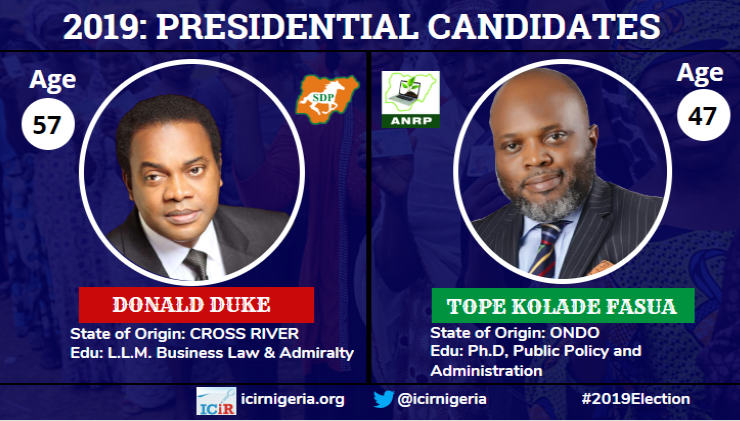 The 2019 presidential election has produced many candidates vying for the position of the number one citizen in Nigeria. And each of them is full of promises to change the lives of Nigerians within four years. Here are some of their many promises:

Donald Duke was born 30 September 1961, and graduated from Ahmadu Bello University in 1982. He later bagged LLM in Business Law and Admiralty from the University of Pennsylvania (1984). He was governor of Cross River State between May 29, 1999, and May 29, 2007. He became the former Commissioner of Finance, Budget and Planning to the third republic civilian Governor Dr Clement Ebri and the member of the National Economic Advisory and Intelligence Committee under the Abacha regime. BBC reported in September 2006 that Governor Duke was the only governor specifically mentioned as not being under investigation by the federal Economic and Financial Crimes (EFCC).

On Arise News, the former governor discussed his presidential bids and plans for Nigeria.

We need to expand the economy. “You have an army of people, and our Bureau of Statistics says that 15 per cent of Nigerians are unemployed.  I can reverse this in a short time by two-ticket item. Find a way to put money into people’s hands. Clean up the 2.5 billion cubic feet of gas equivalent of 25million litres of diesel that is flared every day.

We can build rail lines. Rail lines technology is so basic. We can do them. “We have to go beyond seeking and borrowing and depending on foreign aid for our development. Our development needs to come from within ourselves. We need to wake up.

I will not call for a revision or amendment of the same sex act as it is not accepted by the norms of the nation.

“In restructuring this country, let no part be left behind because you are as strong as your weakest link. I support the clamour for restructuring. As individuals and people, we have our own differences.

SARS will be scraped

The aspirant equally promises to scrap SARS . “I don’t subscribe to a force where people carry arms without wearing uniforms because I don’t even know who you are. There is zero discipline in service and zero motivation.

Duke declared that skill-based education, healthcare, physical structure and technology shall be the four critical areas he would address.

A detailed account of his plan for Nigeria is contained in what he calls the Policy Document. Excerpts:

My administration will pursue access to funding for the myriads of small to medium businesses, many of them run by innovative young Nigerians. This will be founded on the development of robust financial inclusion data designed to inform the selection and sequencing of the government’s SME financing policy. The policy will coopt private sector support through regulatory incentives in achieving, among other things, the initiation of single digit interest rates with reasonable tenures.

Improvement in tax collection and compliance using up to date technology

My administration will drive the improvement of tax collection and compliance by deploying the use of up-to-date technology, while also ensuring the simplification of the tax code to aid compliance. We will put in place an insurance policy that expands insurance participation on life and property as a means of widening the financial base.

Investments in non-oil and gas  sectors

My administration will ensure the efficient use of Nigeria’s hydro resources by revamping the outmoded infrastructure that supports it, and localize the power generation, transmission and distribution value chains as an urgent and effective means of diversifying the country’s power sector.

On education, Duke said that–

Developing a skills oriented educational system is a matter of urgent priority. My administration’s policies will cover access, curriculum development, teacher training and development, and infrastructure.

My administration will design a compulsory system of education, from crèche to adulthood, to ensure that every child up to the adult age of 18 years will acquire an education and learns a skill concurrently.

We will make a series of strategic investments in revamping the teaching profession to attract first rate talent; competitive remuneration with health and housing benefits, hardship allowances for teachers willing to teach in rural areas – as a means of encouraging inclusion – revamping of teacher training colleges, and ensuring a teacher/student ratio of 1-20 at primary and 1-30 at secondary level while also tying teacher career reward to student performance.

Our first step towards revamping healthcare will be to improve the budgetary allocation to the sector by over 35 per cent.

As a crucial step to delivering universal healthcare across the country, I will work with government across all tiers to facilitate the provision of at least one fully equipped and adequately staffed primary healthcare center in each political ward, with a planned ratio of one to a population of five thousand, with services ranging from basic care and curative services, to maternal and child healthcare and preventive services.

There will be a minimum of one General Hospital/Acute Care facility in each local government area. My administration will stem the flow of Doctors migrating to the diaspora by radically improving their working conditions across the country.

Duke also promised improved access to finance for housing development: My administration will co-opt the private sector through regulatory incentives to housing finance available to more Nigerians at better interest rates. Hardworking and honest Nigerians will be gifted with the opportunity to own their own houses.

We will introduce a mechanism that will give land to developers at an incentive rate, which will, in turn, reduce the purchase cost of land as well as the indigenous issues landowners face in owning and developing the land.

We will invest in building basic infrastructure in developing and rural areas to stem the tide of rural urban migration and the consequent congestion of urban settlements.

My administration will enable a system where building materials are locally produced while also deploying creative solutions in the construction of houses.

Tope Kolade Fasua is a Nigerian businessman, economist and writer from Ondo State.  Born September 11, 1971, he studied Economics at Ondo State University. A Chartered Accountant, Fasua also graduated in 2006 with a distinction in master’s degree in Financial Markets and Derivatives at the London Metropolitan University. He is the founder and CEO of Global Analytics Consulting Limited, an international consulting firm in Abuja.

He is unequivocal about his agenda to fix the economy, “it is the one thing we are targeting to fix,” he has said.

“If we start this economy on a positive growth we should be growing this economy by 15- 20%. Taking people out of poverty bringing much more business opportunity in the environment, bringing in tourism and new ideas.”

We are going to be turning things around, re-energising the educational sectors to be solution providers, even all of this electricity stuff is going to be fixed by our students and lecturers in the Universities and Polytechnics in Nigeria, bringing in positive future for this country.

On Arise News with Ruben Abati, the presidential aspirants made a number of other promises.

“What am bringing to the table is a fact and figures-based kind of leadership. A sense of urgency. A lot of myth-busting “thinking about what doesn’t exist and asking why”. A system kind of thinking, as well as attention to details which we haven’t seen.

One of the things I am proposing in my own presidency is that we need to move away from 54 per cent federal level, 26 per cent at the state level, 20 per cent local government level. The next part of development is coming from that direction, we should give 40 per cent, give the 35 per cent State, and keep 25 per cent to ourselves (Federal) However, that 40 per cent must be jointly managed by a team of Federal state and Local Government.

The aspirants drew up his Revolution of Ideas tagged the TKf manifesto, comprising  Fetch initiatives and Core achievements and Projections.

Under the Fetch initiatives, he said: We are bringing facts and figure based government. We are promising 15-20 per cent growth. We are tiding up our environment and prioritising feeding.

We must secure our own security- by employing youth in the security area in the nation.

We will establish the most communicative government in Nigeria ever to mobilise Nigerians behind government policies.

We will encourage entrepreneurs by outlawing multiple taxes and harassment.

We will ensure food sufficiency and strengthening of purchasing power through innovations in organic agriculture.

We will through mass productivity and economic complexity, strengthen Naira to N200 to the dollar in 3 years or less. We will cause a revolution of innovation and alternative energy to high up Nigeria from the bottom up. We will drive the D-I-Y- Do It Yourself culture among Nigerians towards solving all our problems.