SULEMAN Akinbami, an Ekiti oil mogul, has narrated his ordeal during a week-long stay in the hands of kidnappers.

He was kidnapped at his filling station along Ado-Ijan Road, Ado Ekiti, at about 9 pm on Sunday, January 10, 2020, while conducting a routine check at the facility.

Narrating his experience in an interview with Punch Newspaper, Akinbami said his kidnappers were gun-wielding four young men with a good mastery of the English and Yoruba languages. He said they told him they were jobless graduates.

“My kidnappers were angry people. They were very angry; I think they listened to radio and watched television. While I was there, they drove my car to town. In the town, they listened to radio and watched television, they listened to news, they said they saw me on national and international television news, and heard my name on radio. They asked – ‘Who are you? Why is your news everywhere? Are you the first person to be kidnapped? Why all this noise? Who are you by the way? What are you? What is your worth? Why are people shouting Akinbami, Akinbami?’ However, it is surprising that they drove my car around town for a week without removing the number plates and nobody challenged them. They went to town with my car, they came back, they did not remove the number plates and nobody challenged them. It is surprising.”

According to him, his abductors also told him they were sent to kidnap him because he collected 60 million naira from someone, to which he denied.

“Yes, they did. They established contact with my family on the third day. They said it was the 60 million naira, which they alleged that I collected from a certain person. I told them I did not collect any money from anybody. I told them that fortunately, I had just received my statement of account which they could check in the car to see if there was any 60million naira, even N20m or N10m inflow from anybody into my account. I told them to check and that I could not be keeping money at home.”

“When I returned, people told me how they were praying for me, even in Saudi Arabia, following contacts. Prayers from several universities, NASFAT in Ekiti here, the Grand Imam, traditional rulers, Muslims, Catholics on the order of the Catholic Bishop of Ekiti prayed for me. Also. Christians fasted, prayed and had vigil because of me. I am surprised. It was when I returned that I heard about all these. I am surprised.

“I thank all of them for the love they showed me. I shed tears when I came back and heard all these. That they did all these for me – What am I? Who am I? I am nothing and they were sympathetic to my cause. They prayed that God should protect me, I thank all of them. I appreciate them. God will continue to protect them and every member of their families. I pray to God to please repay their kindness.

“One should always be with his God. Don’t do evil. Don’t cheat anybody, be sincere. Be truthful; be honest in everything you do. Be godly.”

While stating that he was only released after paying an undisclosed amount as ransom, he appealed to governments at all levels to create an enabling environment that would productively engage the youth, lamenting that kidnapping had become a huge trend in Nigeria.

“I was released after the ransom was paid. Somebody from my family brought the ransom to them in the bush between Kuje in the Federal Capital Territory and Kogi State. They collected it and released me and as well handed over my car to me. It was after I was released and left the bush that I knew where I was. All the time they were taking me here and there, I did not know where I was. It was on leaving there that I started looking at signposts to see names of towns. I have forgotten the names of the villages in Kogi State close to Abuja. I do not want to remember the experience. I want it to go off my memory.

“Kidnapping has now become a trend. It is my prayer that we quickly find a solution to it. In the bush over there, one day, the kidnappers were elated that one of their victims had paid the balance of his ransom. They told me that they kidnapped somebody who they collected 30 million naira from. They said the victim initially paid 27 million naira and paid the 3 million naira balance that day.

“I am appealing to government; the economy is not helping matters; those in authority should try and see how they can help the unemployed graduates through employment creation. Let the youth have something doing. The truth is that without jobs, it will be easy to recruit them into kidnapping, and nobody will be safe. I appeal to the state government and the federal government to please find a solution because my case will not be the last. They have kidnapped others. Government should do something to, at least, create employment so that those who have no job now will have means of livelihood. Somebody who has no job can be easily convinced to join these groups of people.”

Kidnappers on the prowl in Nigeria

Kidnapping for ransom, which has assumed a worrisome state, is one of the biggest organised or gang crimes in Nigeria.

But in recent years, the narrative has changed,: Kidnapping has assumed a frightening dimension, and is often violent. Not a few victims have lost their lives to either resistance or failure of their family members or security operatives to ‘cooperate’ with the kidnappers.

The current wave of abductions across the country makes every person a potential target, regardless of social class or economic status–unlike political kidnappings of the past. Terror groups waging wars against the country have also added a new dimension to it, especially in Nigeria’s North-East and North-West, whereby they kidnap school children in their numbers, both to generate fund for their criminal activities and to negotiate the release of their captured partners in crime.

According to figures by Nigeria Security Tracker, a total number of 1,990 persons have been victims of kidnappers between 2011 and January, 2021. The figures also showed that no fewer than 849 well-coordinated kidnap attacks were launched by these criminal elements across the country. 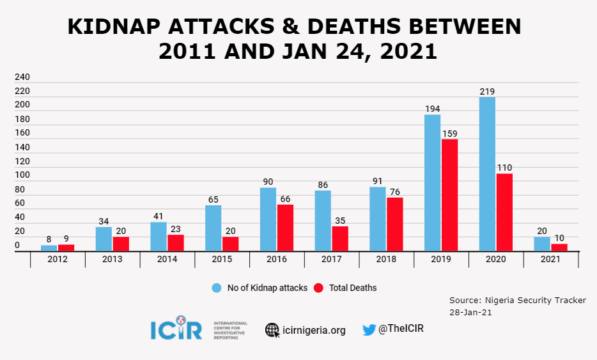 The breakdown also revealed that about 529 persons have died from these attacks.