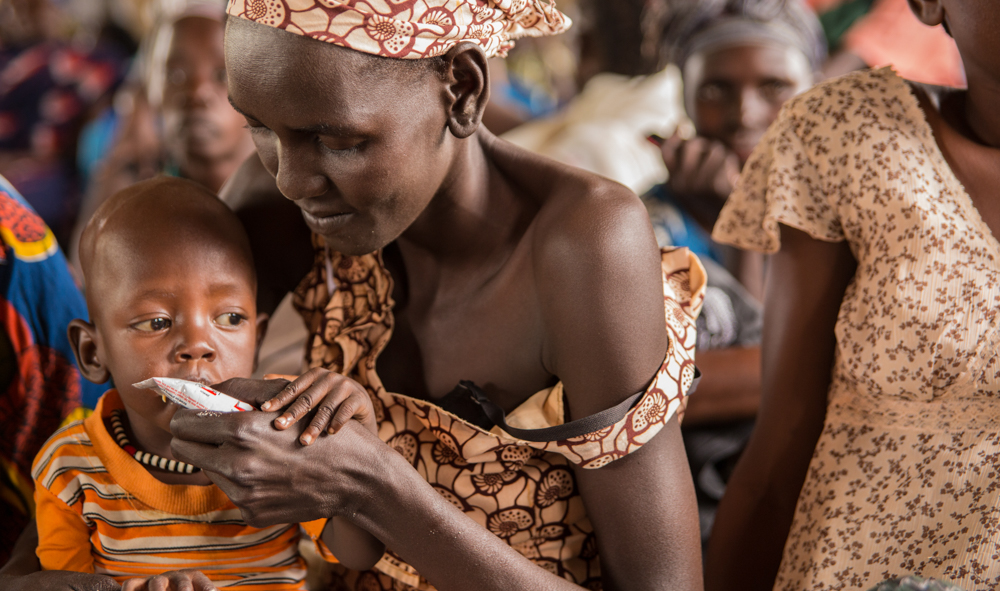 THE ‘Hunger Hotspots’ report released by the Food and Agriculture Organisation of the United Nations (FAO) and the World Food Programme (WFP) on March 23 rank Nigeria among top three countries where acute hunger and food insecurity are set to worsen in the coming months.

The report – Hunger Hotspots: FAO-WFP Early Warnings on Acute Food Insecurity, March to July 2021 Outlook – warns that acute hunger is set to soar in over 20 countries.

However, Yemen, South Sudan and northern Nigeria top the list with populations in the three areas facing catastrophic levels of acute hunger and starvation if urgent action is not taken to address food insecurity.

The FAO and WFP note that, already, over 34 million people in various areas in the concerned countries are grappling with emergency levels of acute hunger (IPC4) – meaning they are one step away from starvation.

Nigeria’s poor ranking in the latest edition of the ‘Hunger Hotspots’ is largely due to the situation in the North-East, particularly Borno State, which has been destabilised as a result of the activities of Boko Haram and other insurgents.

The report observes that ‘in conflict-hit northern Nigeria,’ projections for the June-August lean season show that the number of people in emergency level of acute food insecurity is likely to almost double – to over 1.2 million – since the same period last year.

“In the next six months, food and nutrition insecurity is set to rise considerably in northern Nigeria with some 13 million people affected unless food and livelihood assistance is scaled up,” the report says.

While the countries in the list have areas or hotspots, which are at risk of further deterioration in food security, situations in northern Nigeria, Yemen and South Sudan are identified as particularly concerning due to the scale, severity and trends of the existing food crises.

“In such fragile contexts, any further shocks could push a significant number of people over the brink and into destitution and starvation,” the report notes.

Back then, the FAO-WFP Hunger Hotspot report warned that specific areas in the four countries – Jonglei State in South Sudan; Al Jawaf, Marib, Amran and Al Mahwit governorates in Yemen; Soum and Oudalan provinces of Burkina Faso, and parts of Borno State in North-East Nigeria – were facing a combination of factors: high percentages of the population living in Emergency (IPC Phase 4) conditions of food insecurity, heavy constraints to humanitarian access, and a likelihood of worsening food insecurity levels due to  conflicts, economic blows and climate shocks.

The October 2020 report warned that any further deterioration in these factors could lead to an elevated risk of famine in those countries.

However, while the alert level for Burkina Faso has been lowered in the latest Hunger Hotspots report due to specific interventions undertaken by the Burkinabe government, Yemen, South Sudan and Nigeria remain countries with the highest alert for the March to July 2021 outlook period. 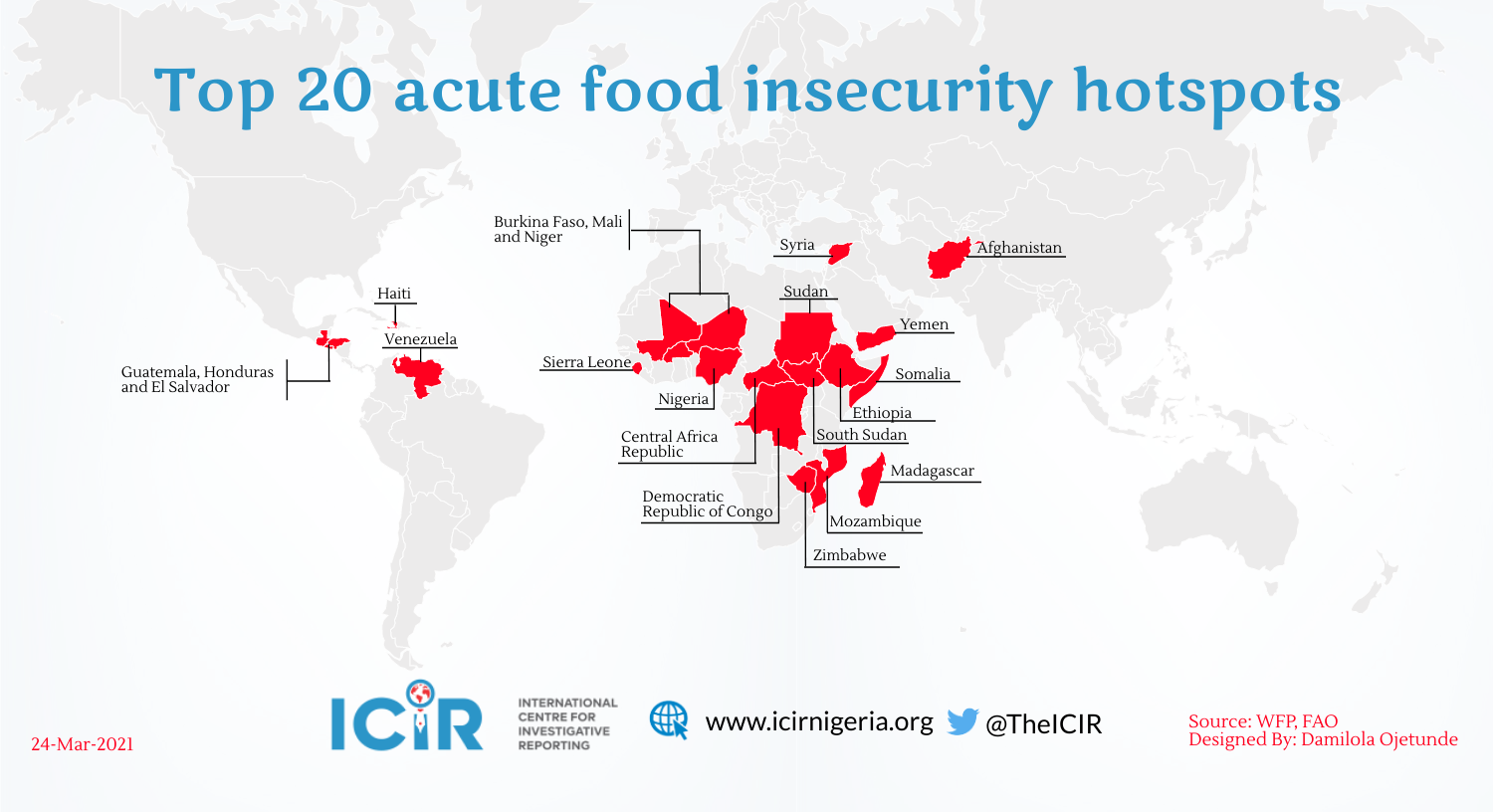 The latest Hunger Hotspots report further observes that in the conflict-affected areas of northern Nigeria, the situation is extremely concerning given the marked deterioration of food security conditions despite the recent harvest.

“Projections for the upcoming lean season (June-August 2021) portray a further marked deterioration with people in emergency acute food insecurity (CH Phase 4) likely to almost double, rising to over 1.2 million compared to over 669,000 people estimated in June to August 2020.

“The majority of people with critical food insecurity are in Borno State, as a result of heavy humanitarian access constraints and ongoing conflict,” the report says.

The FAO and WFP say the situation in Borno localities such as Abadam, Dikwa, Guzamala, Kukawa and Marte, as well as other only-partially accessible garrison towns, remain of extreme concern.

The report adds that, overall, in the next six months, northern Nigeria is expected to face a marked deterioration of food security and nutrition due to conflicts and economic factors, aggravated by the secondary effects of COVID-19.

Thirteen million people are projected to be in high acute food insecurity (CH Phase 3 and 4) between June and August 2021, if food assistance and livelihood support are not scaled up.

The development would represent a further increase on the 9.2 million people estimated in November 2020.

The report notes that the prevailing situation is particularly concerning, given that the October to December period is post-harvest, and, usually, there should be a considerable improvement in the overall food security situation.

“A steady deterioration that has already pushed 9.2 million people into crisis or worse levels of acute food insecurity over the past two years is likely to continue. If this negative trend persists, it may lead to an increased risk of famine for areas of Borno State.”

The North-East remains the key hotspot of conflict in Nigeria. According to the report, as of November 2020, 2.1 million people were internally displaced, largely in Borno, Yobe and Adamawa States, as a result of the Boko Haram insurgency.

The FAO and WFP observe that violence in the North-West and North-Central regions, which have increased the number of people in need of food and livelihood assistance, has been exacerbated by the “growing spread from the North-East of insurgent groups formerly known as Boko Haram.”

The impact of the conflict, according to the Hunger Hotspots report, is compounded by the detrimental economic effects of the COVID-19 pandemic, which has led to decline in remittances, and lowered global prices for oil accounting for 50 percent of the country’s revenue. The report further notes that Nigeria’s real Gross Domestic Product (GDP) is not expected to return to pre-crisis levels before 2023 or 2024, as income losses and rising food prices result in sharp losses in purchasing power.

Recently, parts of southern Nigeria experienced scarcity and high cost of staple foodstuffs after northern traders under the aegis of the Amalgamated Union of Foodstuffs and Cattle Dealers of Nigeria (AUFCDN) imposed a food blockade on the South.

The development underscores the fact that the North is Nigeria’s major food producer,  forcing governments, groups and investors in the South to reconsider ways of improving food production in the region.

However, the latest FAO/WFP Hunger Hotspots report says “across 15 states in northern Nigeria, nearly 13 million people are expected to face crisis or worse levels of acute food insecurity (CH Phase 3 and above) in the next lean season (June to August 2021), up from 9.2 million between October and December 2020.”

It continues that the situation marks a steady trend of serious deterioration, having risen from 8.7 million in mid-2020, adding that of the 13 million, 3.9 million are projected to be in the North-East and 5 million in the North West, where there is little humanitarian presence.

In coming months, the report says, people living in emergency acute food insecurity (CH Phase 4) are likely to almost double, rising to over 1.2 million for June to August.

A total 970, 000 of these people are in the North-East, with 700 000 in Borno State alone, where the situation remains of extreme concern due to heavy humanitarian access constraints and ongoing conflict, particularly in the localities of Abadam, Dikwa,  Guzamala, Kukawa and Marte.

The FAO and WFP stress that, should the situation deteriorate further, the areas may be at risk of famine.