Nigeria can earn N1trn from cassava exports, but it is falling behind -PIND

NIGERIA has the potential to generate $427.3 million from domestic value-addition and earn N1 trillion ($2.98 billion) from agricultural exports of cassava per annum, Executive Director of the Foundation for Partnership Initiatives in the Niger Delta (PIND) Dara Akala has said.

The recent cassava export earnings show that the country is falling behind and much work needs to be done to achieve the goal.

Nigeria remains the largest producer of cassava in the world, with approximately 59.19 million tonnes as of 2019.

However, the country falls behind in exporting the crop. According to the Observatory of Economic Complexity (OEC), “in 2019, Nigeria exported $735k in Cassava, making it the 61st largest exporter of Cassava in the world.”

Akala noted in his opening speech at the National Cassava Seed Summit 2021 that while cassava had been gaining relevance in Nigeria as an industrial crop, it was posed with the challenge of low productivity.

The PIND director identified Nigeria’s cassava farmers’ struggle to deliver roots to large-scale processors as the cause of low productivity and loss of capital in the sector.

The focus of the summit, according to Akala, was mainly on private sector-led models and as he mentioned in his speech, the business of “cassava cultivation in Nigeria is still largely driven by small-scale farmers using rudimentary implements and with a landholding of between 0.5 to 2.5 ha per individual farmer.”

Akala spoke on the moves made by PIND in the cassava industry, including an investment of $800,000  since 2016, which had worked to “increase cassava productivity, strengthen coordination and relationships of cassava value chain actors, and promoted improved technologies for cassava production in the Niger Delta region.”

He further said that the group had reached an approximate 300,000 farmers with information and training, facilitated the creation of almost 2,500 FTE jobs and a network of 150 service providers as PEPs.

A look at the OEC data on Nigeria from 2015 up until 2019, which encompasses the years of PIND’s efforts in helping the cassava sector grow, shows a slow growth.

For an agricultural business with such promise, the challenge of supplying companies that perform large-scale cassava processing with reliable, healthy and fresh cassava roots to feed their mills on a continuous basis is a challenge.

In Akala’s words, “One company alone needs around 240 tonnes of FCR per day.”

He stressed the need to encourage the private sector to champion innovative approaches. 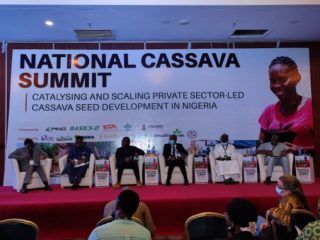 He said cassava was grown in all the states of Nigeria, but might exist in different morphological types. Against the backdrop of insurgency, he said it was the most crop displaced in cases of conflict; in that when people left their towns, they would pack up their stems with them.

He said the BASICS model gave opportunities for markets to be created where young people would buy stems and make money.

In attendance of the summit held in Abuja, with the theme ‘Catalyzing and Scaling Private Sector-Led Cassava Seed Development,’ were state commissioners of agriculture, vice chancellors of universities and heads of agricultural groups, among others.

Chat us on WhatsApp
Advertisement
Previous article#MySARSstory: The Wrath of Man
Next articleCollapsed building: Osinbajo denies link to property, land