FACTCHECK: Is Nigeria largest producer of cassava in the world?

KARIMA Babangida, director of Federal Ministry of Agriculture, claimed that Nigeria was the highest producer of cassava.

Babangida, who was represented by Umar Mohamed, regional director of North East, Federal Ministry of Agriculture and Rural Development, made this claim at a workshop on cassava production organised by the ministry.

She said despite the low yield of cassava in the country, which was below 10 tonnes per hectare, Nigeria still maintained its lead as the world’s largest producer of cassava. Her words:

Nigeria is still the world’s leading producer of cassava, compared to others like Thailand.

Nigeria is the largest producer of cassava in the world.

The FactCheckHub checked the Food and Agriculture Organisation Statistics (FAOSTAT) website for the official data on cassava production across the world.

The FAO 2019 data, which was the latest as at the time of publishing this report, put Nigeria on the top of the list of countries with highest cassava production with 59.19 million tonnes. The Ministry of Agriculture and Rural Development in Nigeria also validates this claim. 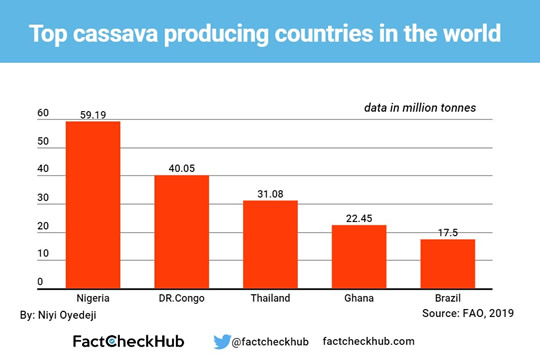 Data  from the Food and Agriculture Organisation (FAO) on cassava production across the world supports the assertion that Nigeria is the largest producer of cassava in the world. Therefore, the claim is TRUE.