DESPITE an announcement made last year, the Nigerian Law School (NLS) has stuck to its conventional—but controversial—grading system where students are ranked based on the subjects  in which they perform most woefully.

At the Nigerian Bar Association’s General Conference held in August, the Council of Legal Education (CLE) announced  it “reviewed the grading system at the Nigerian Law School to the effect that the hitherto practice of assessing students at the Bar Examinations which was largely based on their least grades scored have now been revised accordingly.

“The effect of this review is that no students will be assessed by his/her least score any more,” it said.

The Council is responsible for regulating legal education and how Nigerians qualify to become members of the bar.

A copy of its July meeting’s resolution obtained by The ICIR, signed by NLS Director-General Isa Hayatu Chiroma, explains the difference between the old grading system and what was approved. It states that the new method was scheduled to take effect as from August 2019.

According to the proposed policy, a student will graduate with a first class if they score at least 70 per cent in four courses, score between 40 and 69 per cent in the fifth (and final) course, and have a cumulative score not less than 350 (out of 500).

And, finally, graduates with a pass are those who scored at least 40 in four courses, between 35 and 39 in the fifth “provided the deficiency is not more than five marks and is remedied”, and have a cumulative score of 200.

On the other hand, according to the conventional marking scheme, students are graded based on their poorest performance. Hence, if a student has As in four courses and C (between 40 and 49) in the fifth, he or she is awarded a “pass” regardless of how high the cumulative score is.

The school also makes it difficult for students to challenge their class of degree. To get a breakdown of the grades in each course, they have to apply after paying the sum of N2,500. Transcripts, which should contain the specific scores, are provided after a processing fee of between N11,000 and N21,500 is paid — but the school warns that they “will not be sent for applicants’ personal use”.

In contrast, prominent law schools in the United States, such as Harvard, Stanford, Berkeley, and Yale, make use of the pass/fail grading system designed “to not penalise those students that might otherwise have had a few mediocre class grades here and there”.

According to the Harvard Law School grading policy, “Latin honours at graduation will be based on the average of the three annual grade point averages [and] in calculating annual GPAs, each grade is weighted in accordance with the number of credits earned in the course”.

In 2017, Joseph Onele, a lawyer and doctoral candidate at the University of Adelaide, petitioned against the grading system, which he described as retrogressive, arbitrary, and flawed. Now closed, the petition was signed by nearly 1,800 supporters.

When the change in grading system was announced last August, Joshua Nwachukwu, a Lagos-based lawyer, described it as the “greatest takeaway” from the annual conference.

“This disclosure has been commended by lots of lawyers and the general public, who see this as a wind of change, positively blowing away anachronistic practices,” he noted.

“Indeed, bearing in mind that the legal profession has prided itself as being conservative and traditional, many feared that this day would not have come. Knowing it has come in our lifetime is impressive and it’s sign that other noble changes and advancement can be effected.”

But despite the widespread excitement that greeted the Council’s announcement, it has quietly returned to the old grading system — as shown by different results released in November and sighted by The ICIR.

A source at the NLS confirmed that the proposed method was rejected because using it would have produced over 1000 first-class graduates in one set. It was also alleged that Attorney-General Abubakar Malami did not appoint academics into the Board of Examiners because they were “too generous with grades”.

About the school’s unfulfilled promise, a graduate of the University of Ibadan lamented: “They announced that they have changed the grading system. Unfortunately, they didn’t, because in my examination I had 4 As and 1 B+ and they gave me 2:1. They misinformed the public.”

Onele also described the development as unfair. “Why make a representation to the general public that the policy has been changed when in actual fact it has not?” he asked.

“It would appear the CLE spoke too soon and sure puts to test the credibility of their future statements going forward. While some could argue this puts on trial the integrity of those who are supposed to be responsible for our legal education, one may not be wrong to assert that our society still has a long way to go in putting words to action and saying less but achieving more through results.” 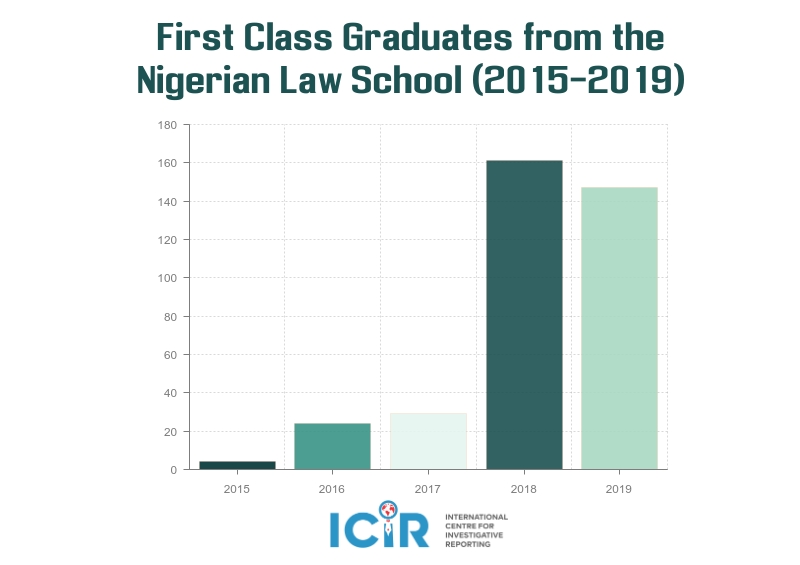 The authorities have not responded to enquiries from The ICIR about why the new grading system was abandoned despite the public declaration and what the Law School plans to do going forward.

Calls placed to Elizabeth Max-Uba, secretary of the Council of Legal Education, and Sam Osamolu, head of academics at the Nigerian Law School Abuja headquarters, were not answered. No replies have also been received to texts sent to their phones.

Last Friday, another set of students at the school finished writing the bar examinations. It will be difficult to guess whether the regulators of legal education will retrace their steps, or rather if last year’s commitment to turning around the system will be ignored as though it never took place.