No evidence of corruption charge against Adoke, Malami says in letter to EFCC— 2mins read 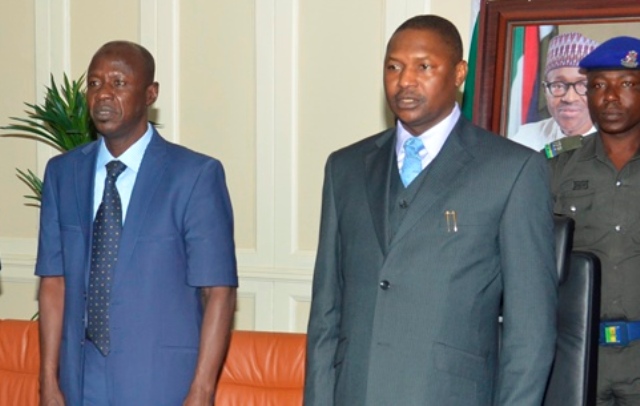 Abubakar Malami, Attorney General of the Federation (AGF) and Minister of Justice, wrote the EFCC saying it lacked ample evidence to prove the money laundering charges it brought against Mohammed Adoke, former AGF, and Dan Etete, former Minister of Petroleum Resources, over the $1.1 billion Malabu Oil deal, it has been revealed.

The EFCC had charged Adoke and Etete with fraud for their involvement in the Malabu deal but both men have denied any wrongdoing.

Adoke, through his counsel, Kanu Agabi — himself a former AGF — had asked the court to declare the charges against him illegal, as all of his actions with regards to the deal were carried out on the directives of Goodluck Jonathan, who was President and Commander-in-Chief at the time.

At the resumption of hearing on Thursday, Agabi again asked the court to declare that Adoke’s actions with regards to the Malabu oil deal were directed by Jonathan, hence he could not be made to take responsibility if anything went wrong.

Agabi argued that since the head of government takes credit for anything good in a presidential system of government, he should also take the blame for decisions that yielded unfavourable results.

To further prove his point, Agabi produced a letter purportedly written by Malami, the current AGF, to the EFCC, advising the commission to reconsider the charges against Adoke.

“A curious observation of the entire file clearly indicates that the proof of evidence is unlikely to support the counts which border on fraud, conspiracy and money laundering,” Malami’s letter further read.

“There is nothing in the proof of evidence to support the charge of money laundering, therefore it is unrealistic for the prosecution to prove the elements which include illicit funds, attempt to conceal/concealment of illicit funds, transfer of such funds through various channels to introduce same as legitimate funds, in financial institutions without the express proof of these elements, this count may not be sustainable.

“The EFCC investigation and attached proof of evidence does not appear to have clearly revealed the case of fraud against the parties in view of their claimed acting in their official capacities with purported approval of the president of the FGN at the time and with claimed intentions that the matter be resolved in the national interest to save the nation from acrimonious litigations resulting into high legal fees and the non production of the oil field while litigation lasted.”

Malami then listed other reasons for which he felt that the case be “thoroughly investigated especially regarding the allegations of wrongdoing in connection with the $ 1.1 Billion USD in order to satisfy the constituent elements of offences.”

The presiding Judge, Binta Nyako, adjourned the hearing till February 28 for ruling on the motion filed by the defence counsel.