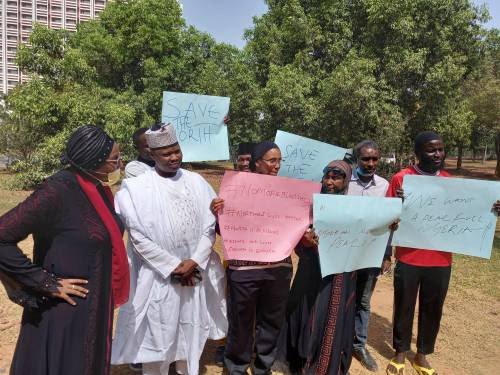 YOUTHS, under the aegis of Concerned Northern Nigerian Groups, have lamented the deteriorating insecurity in their part of the country.

“We are here to call on the Nigerian government that the North is bleeding and enough is enough,” said one of the group’s leader Zainab Ahmed, while speaking with newsmen on Friday.

Citing the recent burning of more than 20 travellers by terrorists in Sokoto, Ahmed said that the region was tired of burying its women, children, and men because of insecurity.

She also decried the destruction of farmlands and crops by the criminals.

Ahmed accused the Muhammadu Buhari’s administration of insensitivity to the plight of the North after voting massively for his re-election in 2019.

“We are here to tell the government to secure our lives. We bury hundreds of people on a daily basis yet there is no action, not even ‘sorry’ from our leaders,” she added.

“We called on our followers to vote for Buhari in 2019 for the next level and this next level is killing us. We are dying; this is not what we voted for.”

The victims were said to be on their way to the southern part of the country when bandits intercepted their vehicle.

The victims were said to be performing their early morning prayers when they were attacked by the gunmen that came in large numbers.

There are also reports that the criminals have taken over many communities in Sokoto State, where they terrorise and impose taxes on locals.

In reaction to the recent killings, the president, on Friday, dispatched a high-level five-man security delegation, made up of the heads of the nation’s intelligence and security services, to Sokoto and Katsina states, with a mandate for quickly recommend how to end the carnage.

According to a statement by the President’s Spokesperson Garba Shehu, the delegation was being led by the National Security Adviser (NSA) Babagana Munguno.

The president is expecting an immediate situation report and recommendations on actions to effectively deal with the worrisome situation, Shehu said.

NIGERIA's small and medium enterprises are in for more difficulty in access to finance...
Advertisement