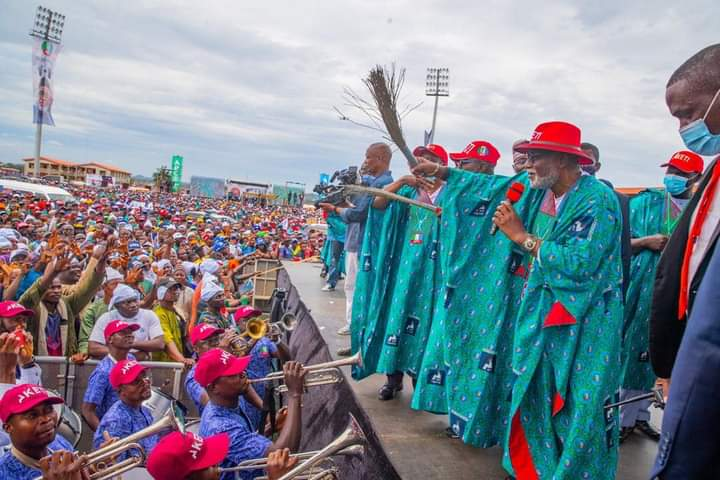 NIGERIAN President, Muhammadu Buhari, has said the candidate of the All Progressives Congress (APC) in the October 10 Ondo state gubernatorial election, Rotimi Akeredolu deserves to be re-elected.
Buhari said this on Wednesday in a virtual message from the Presidential Villa at the grand finale of the APC’s governorship campaign rally.

“Akeredolu deserves to be re-elected to consolidate the good work he commenced in his first term. I am not just proud of his achievements; I am confident he will enjoy the mandate of the good people of Ondo State for the second term
“The performance of governor Rotimi Akeredolu is endearing and he has taken the state to a new level and on the part of prosperity,” said Buhari.

The president urged participants in the election to avoid violence and play the game by the rules charging them to come out en mass to vote without any fear of intimidation or harassment.
“As a government, all necessary measures and security will be put in place to ensure free and fair election come Saturday 10th October,” Buhari assured the citizens of the state.

Mai Mala Buni, the National Caretaker Chairman of the APC during the rally said he is rest assured that the party would come out victorious in the Saturday polls.
“We are here to win the election. We are here not to create or cause any violence. We are here to consolidate our mandate on Aketi.
“I want our people to come out en masse on Saturday and vote for APC in order to sustain the continuity of progress in Ondo State.”

The Kogi state governor, Yahaya Bello who was also present at the APC rally said governor Akeredolu has performed credibly well in all strata of government including massive infrastructural drive and human capital development.
“This is why we are asking for continuity so that he can consolidate on his achievements.
“Don’t be intimidated by the opposition parties because we are going to win in the whole 18 local government areas in the state. It is going to be a landslide victory, we will win, don’t be intimidated.”