One ship, two captains… Odinga declares self president of Kenya 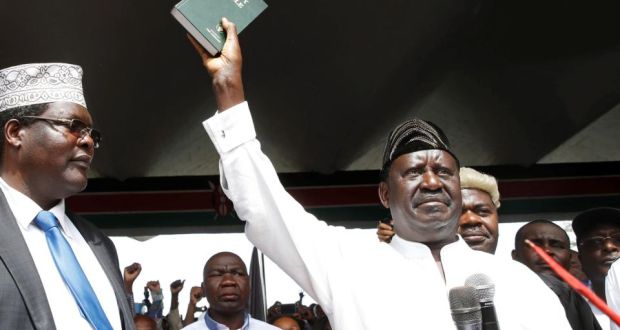 Raila Odinga, Kenya’s opposition candidate in the last year presidential election, says he is answering a higher call to assume the office of the people’s President of the Republic of Kenya.

Odinga stated this in front of a mammoth crowd of supporters on Tuesday, as he was sworn in as a parallel President of the country with a copy of Holy Bible in his hand at Uhuru Park, Nairobi.

Donning a white caftan and black cap at the event, which has been released to Youtube after Kenyan authorities banned the transmission on state television channels, Odinga spoke local dialect.

“I wish to thank the people of Kenya for the mandate they have given us and for their steadfast confidence in us. You came from all corners of the republic to witness my inauguration and it was good to see you out in millions,” he said.

“Most of all I thank the good Lord, my family and all those who have undertaken this journey with us. We have arrived in Canaan; thank you for staying the course with us. Asanteni sana.”

He told crowd that the people had had enough of election rigging and the event was a step towards establishing a proper democracy in the East African state. 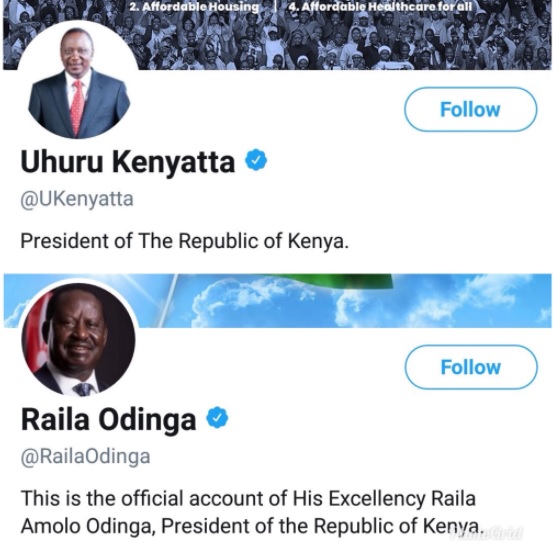 He was part of the August 2017 disputed and later cancelled election, which gave victory to Uhuru Kenyatta.

Kenya’s Supreme Court described the election as neither transparent nor verifiable before annulling it.

Kenyatta was officially re-elected with 98 percent of the vote on October 26, but just under 39 percent of voters turned out. He was inaugurated in November.

Odinga argued that Kenyatta was elected by a small section of the country, maintaining that he did not recognize his opponent’s victory.

He urged his supporters to shun the re-election, because “no reforms had been made to the electoral commission”.

President Kenyatta, who was sworn in for a second term last November, warned the media not to cover the swearing-in ceremony, while the country’s Attorney General said holding such a ceremony amounted to treason.

Chat us on WhatsApp
Advertisement
Previous articleLet the restructuring debate continue
Next articleINVESTIGATION: Delta Steel Company is dead, its former staff are dying