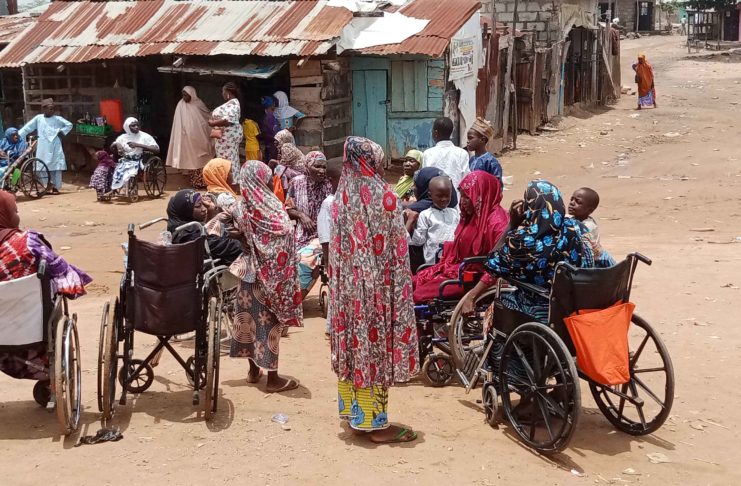 ADAMU Musa, 35, and Maimunat, 30, are among the scores of couples living with disabilities at the Abuja Disabled Colony. They are polio survivors.

Many of the survivors did not receive vaccination against polio during their childhood, and when they contracted the virus, they were defenceless.

Musa and his wife from Kaduna State who live with their three children at the camp, located at Karonmajiji, near Abuja City Gate, became infected at early age.

“I was about six years old when I realised I had polio. I thought it was something that the hospital could treat for me, and I would be fine. But all the efforts my parents made to restore my affected leg failed. I didn’t know I would grow with the condition till this age,” Musa said.

He said only a miracle could make him walk again because he didn’t have the money for corrective surgery.

Not fewer that 170 of  500 adults at the colony live with polio, and many are married to each other, said the camp’s secretary Mohammed Dantani.

Victims can only move around with canes, crutches and wheelchairs. Some of them are supported by their children and relations.

Maimunat said it has been agonising to live with the disease, adding that the lack of health care facility in her home town was the reason her parents could not vaccinate her as a child.

WHO approves malaria vaccine for children

Covid lockdown worsens condition of sickle cell patients, and their situation is yet to get better

“When my parents realised that I could not walk, they took me to several hospitals. But the virus had done the damage. I had to live with it, except I did the surgery. And my parents did not have the money.”

Mainunat said she was happy that none of her children contracted the virus because she ensured they received the vaccination.

Hafsat Isah has suffered from polio for over 30 years. She lost her husband, a polio survivor, five years ago, and now lives with her five children at the camp.

Hafsat who runs a small retail business to feed her children, is the only polio victim among her parents’ 13 children.

She said her parents did not vaccinate her against polio during childhood.

“I don’t know if I can be fine again. But all I can say is that my parents struggled to make me walk like others. Their efforts were to no avail,” she said.

She said there was no hospital in her community when she was a child.

A native of Badarawa Local Government Area, Kaduna State, Hafsat lamented that she could not help her ageing parents when they needed her the most to support them because of her condition.

Another victim Zeitu Adamu is from Toro Local Government, Bauchi State. She has lived all her life with polio.

She lost her husband this year after he had suffered from acute polio pains.

Zeitu, 35, has been fending for her eight children with the proceeds from her groundnuts business.

She also confirmed that her parents did not vaccinate her against the deadly disease.

“What can I do? That’s how I met myself growing up. My parents tried their best to get me back on my feet, but it was very late. As it is today, my fate is in the hands of God,” she said.

Neziru Muhammed, a native of Niger State and a welder, has been at the camp for 10 years. He came to the nation’s capital in 1999. He was seven years when he contracted the virus.

The 40-year-old is married with five children. His wife has no disability.

Neziru said he had accepted his fate. “I have been in this condition for 33 years now. I believe in God for His help to restore the leg. But, I never knew I could live with polio in this manner for a long time.”

Ibrahim Sagir is from Kwale Local Government Area of Kano State. The 39-year-old said he contracted the disease as a child. Married and blessed with three children, Sagir said his wife had no disability.

According to him, he is the only child with the virus from his family of seven. He was not sure if he was vaccinated against the virus.

“I cannot say if my parents vaccinated me. All I know is that I had the virus long ago, and I didn’t know there would be no solution to it.”

Sagir runs a cosmetic shop to fend for his family.

Polio victims and survivors exist in every region in Nigeria, but majority of the survivors are in the North, where the condition is prevalent.

Between 1980 and 2016, Nigeria recorded an estimated 114, 236 cases of paralytic polio, mainly because parents did not vaccinate their children.

The country was able to stop the wild poliovirus with the support of institutions such as the United Nations Children Fund (UNICEF), World Health Organization (WHO), Rotary International, the Bill & Melinda Gates Foundation, and Aliko Dangote Foundation.

Apart from committing billions of naira into vaccination and campaigns against the virus, some of the organisations funded corrective surgeries for many of the victims.

In the 2019 Polio Eradication Global Update, UNICEF said that Nigeria’s last case of the wild poliovirus was reported in September 2016.

After obtaining polio-free certification from the WHO in August 2020, Nigeria left Pakistan and Afghanistan as the two remaining countries with the disease.

With the administration of the polio vaccine, countries have contained the spread of the virus.

The US Centre for Disease Control (CDC) notes that the polio vaccine protects children by preparing their bodies to fight the poliovirus. “Almost all children (99 children out of 100) who get all the recommended doses of the inactivated polio vaccine will be protected from polio.”

For instance, Zamfara State had only 23 doctors working in all public hospitals in the state as of 2017.

The ICIR reported earlier this week how the country lost 9,000 doctors to the UK, Canada and other countries between 2016 and 2018.

Similarly, many children had missed vaccination following insecurity in parts of the nation.

Budgetary allocation to the health sector by tiers of government have been inadequate.

In 2016, the Federal Government had a budget of N6.06 trillion, out of which it earmarked N550 billion to the health sector. The amount represented 4.1 per cent of the budget. The allocation was a sharp deviation from the 2001 Abuja Declaration, where African Heads of Government pledged to commit at least 15 per cent of their yearly appropriations to the sector. 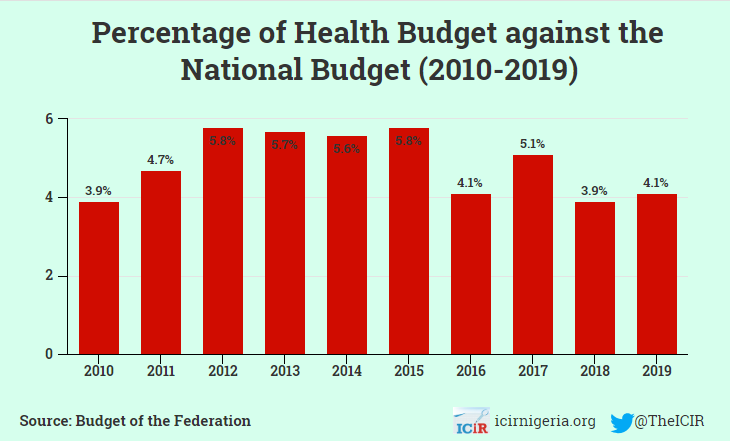 The budget remained low in 2020 and 2021, despite the emergence of COVID and its attendant impacts on the nation.

In 2020, the government reduced budget allocation to the Basic Health Care Provision Fund by more than 40 per cent, from N44.4 billion to N25.5 billion.

Out of this year’s budget of N13.6 trillion, recurrent and capital expenditures valued at N380 billion and N134 billion, respectively, were allocated to the health sector, amounting to a total of N514 billion. The amount represented 3.8 per cent of the budget.

Though Nigeria appears to have defeated the wild poliovirus, some diseases still require vaccination and more investment in health infrastructures to contain them. There is also a compelling need for the country to boost its preparedness for future epidemics, experts say.

Nigeria currently battles COVID-19, to which it has lost about 3,000 citizens. Its  level of vaccination has been low because it depends on donors for vaccines.

As seen in polio, diseases have stopped many from living their dreams, while others have died.

The ICIR had reported President Muhammadu Buhari saying that the emergence of COVID forced Nigeria to increase its diagnostic laboratories from four to 140.

Experts at a recent webinar had said Nigeria was not prepared for future epidemics.

Professor of Virology Oyewale Tomori said: “We shouldn’t be building laboratories now, 60 years after Independence. We should be ashamed of ourselves that when COVID came, we only started with two laboratories. Sixty years after Independence, we shouldn’t be talking about that. We are counting those as successes when we should be ashamed of all those little things.”

Chat us on WhatsApp
Advertisement
Previous articleOur government will not be distracted from addressing insecurity, corruption – Buhari
Next articlePandora Papers: How Pastor David Oyedepo set up family offshore company in tax haven