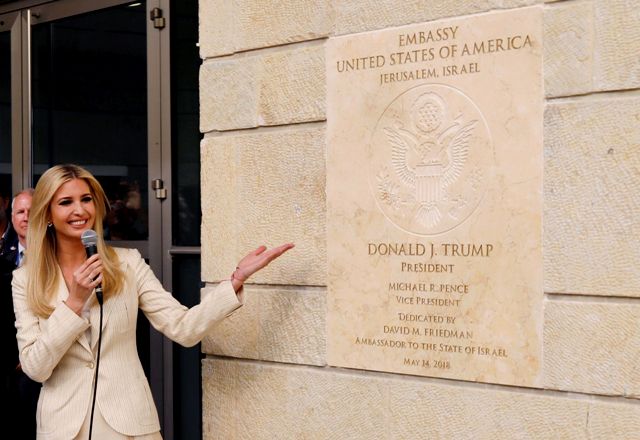 Donald Trump, 45th President of the United States of America, has made good his promise to relocate the country’s Israeli embassy from Tel-Aviv to Jerusalem, in recognition of the latter as the true capital of Israel.

The embassy started operating from Monday inside the existing US consulate building in Jerusalem till a bigger structure is constructed, the authorities have said.

“Israel is a sovereign nation with the right to determine its own capital, but for many years we failed to recognise the obvious,” Trump said.

Already, about 52 Palestinian protesters have been killed during violent protests at the Israeli-Gaza border and over 2000 others were injured.

The protesters hurled stones and petrol bombs at the security personnel who responded with teargas, rubber bullets and, later, sniper bullets.

Reporters described it as the bloodiest day in Gaza since the 2014 conflict. In total, over a hundred Palestinians have been killed in protests to mark the 70th anniversary of the 1948 Arab-Israeli war.

A BIT OF HISTORY

Jerusalem, located on a plateau in the Judaean Mountains between the Mediterranean and the Dead Sea, is one of the oldest cities in the world, and is considered the holy city  to three major religions namely: Judaism, Christianity and Islam.

Israel captured East Jerusalem from Jordan during the 1967 Six-Day War and subsequently annexed it into Jerusalem. Ever since, Israel has remained in control of Jerusalem.

Both Israel and Palestine lay claim to Jerusalem as their capital, but neither claim is recognised internationally.

Some countries had at one time or another recognised Jerusalem as Israel’s capital and sited their embassies there. The countries include The Netherlands, Costa Rica, El Salvador. However, in 1980, after Israel passed a law declaring Jerusalem the united capital of Israel, the United Nations Security Council adopted a resolution condemning the move and described it as a violation of international law.

Consequently, countries that had their embassies in Jerusalem, moved to Tel-Aviv. Costa Rica and El Salvador were the last to move in 2006. Nevertheless,  countries such as Britain and France have consulates in Jerusalem.

In 1989, Israel began leasing to the US a plot of land in Jerusalem to be used for a new embassy, at the rate of $1 per year, for 99 years. As at December 2017, the plot has not been developed, and it remains an empty field.

In 1995, the US Congress passed a law requiring America to move the embassy from Tel Aviv to Jerusalem. Proponents of the law, like President Trump, argued that the US should respect Israel’s choice of Jerusalem as its capital, and recognize it as such.

However, every US president since 1995 namely: Bill Clinton, George W. Bush and Barack Obama, declined to move the embassy, citing national security interests. So every six months, the President has used the presidential waiver to circumvent the embassy move. The last of such waivers was signed by Trump in December last year.

SO WHAT HAPPENS NEXT

Uncertainty is the word, as nobody can say for certain how the international community will react to the development. However, it is expected that the decision could affect President Trump’s new found romance with top Arab nations, including Saudi Arabia, The United Arab Emirates and Egypt.

Already, violent protests have claimed over 50 lives on Monday alone, and more protests are expected across many Arab countries, especially Iran, after Donald Trump pulled out of the US-Iran nuclear deal.

As BBC’s Jeremy Bowen puts it, “the embassy move is good for the (Benjamin) Netanyahu government, good for President Trump’s base and makes most Israelis pleased but there is no evidence to back Netanyahu’s claim that it is good for peace”.