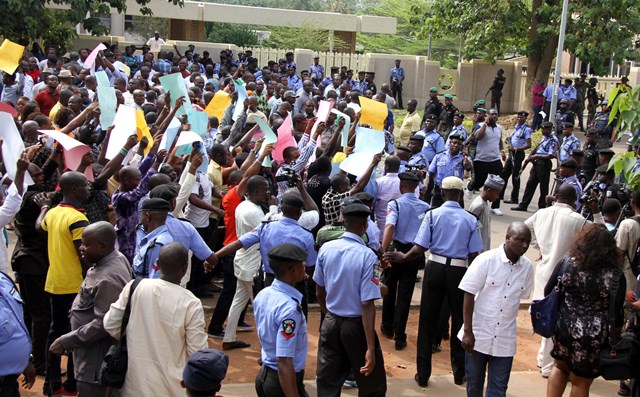 Hundreds of protesters gathered at the headquarters of the Independent National Electoral Commission, INEC, in Abuja, over the alleged production of fake election result sheets for the Rivers re-run elections.

The protesters under the aegis of Citizens for Good Governance demanded for the resignation of INEC’s Chairman, Mahmood Yakubu, whom they described as incapable of heading the electoral institution.

They alleged that the INEC National Commissioner in charge of Electoral Operations, Amina Zakari, as well as the Minister of Transportation, Rotimi Amaechi, were planning to rig the rescheduled legislative rerun election in favour of the All Progressives Congress, APC.

Rivers State Governor, Nyesom Wike had on Monday accused INEC, the Nigerian Police and the All Progressives Congress, APC, of colluding to rig the forthcoming Rivers Rerun elections.

The legislative re-run election in Rivers State has been rescheduled to hold on December 10, following a threat issued by the Nigerian Senate to suspend sitting if the election was not conducted on or beforeDecember 10.

INEC have had to reschedule the polls twice, citing the violence that characterized elections in the state; an NYSC  member, who was co-opted as an ad-hoc INEC staff during the governorship election in the state last year.

US Spends $30 Million On Reproductive Health In Nigeria