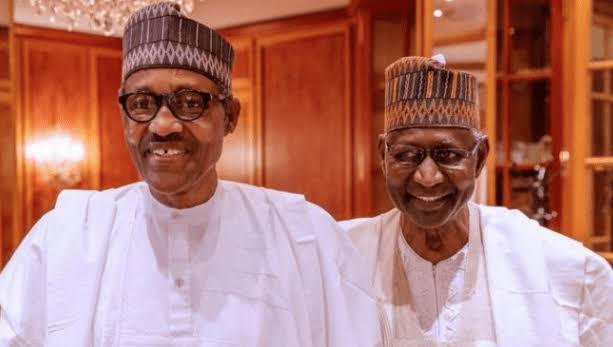 By Farooq A. Kperogi, Ph.D.

Many people are troubled by what appears to be a carefully coordinated cascade of cloying, revisionist, and, in some cases, outright mendacious posthumous rhetorical rehabilitation of Abba Kyari by people who had misled their readers into seeing them as disinterested sentinels of the wielders of power.

The summary of all the gushy Kyari tributes is basically this: Abba Kyari was an uncommonly kind, deeply intellectual, obsessively bibliophilic, fiercely loyal, hardworking, cosmopolitan Nigeria who had more loyalty to Nigeria than he had to his primordial ethnic, regional, or religious constituencies, and who didn’t have even a fraction of the power and influence often attributed to him.

Every empirical evidence that contradicts the torrents of synchronized, saccharine, superhuman portraits of Kyari, his friends want the world to believe, is mere conspiratorial whisper that is wholly dissociated from reality.

Kyari, his friends imply, was a nearly flawless saint. Lack of access to him caused some people to unjustly demonize him. But his confidence in the favorable judgement of history—and of his boss, to whom he was loyal like nobody had ever been in human history—restrained him from correcting reputationally injurious falsehoods against him that took firm roots in the media and in the national popular imagination.

If my recapitulation of the tributes strikes you as annoyingly hagiographic, exaggeratedly mawkish, and overly disingenuous, it is because they really are. And they are dangerous for at least three reasons.

One, there is no one on the surface of this earth who is that perfect. Most people are smart enough to know that. People who peddle a narrative that a human being is untouched by any stain, and that evidence to the contrary is a consequence of “sponsored attacks,” are two-bit spin doctors. It’s worse if they’re journalists.

Two, the minority of people who believe effusive, sanitized, pumped-up portraits of people often suffer self-esteem deficits. They vicariously compare themselves to the perfect person and come up short. They can’t relate to perfection because perfection is not a human quality.

Third, when unassailable and irrefutably firm evidence emerges that contradicts the unrealistic idealization and deodorization contained in posthumous tributes, the reputation of the target of such tributes falls precipitously and irrecoverably.

Nonetheless, I know why people who personally knew Abba Kyari have chosen to venerate him after death. Personal access reveals a part of people’s personality traits that is often concealed to the public.

The English proverb that says “Familiarity breeds contempt” is not always true. Familiarity can also activate warmth and deep connection. It allows some people to become captives of other people’s charm offensives.

In the late 1990s, a senior northern journalist who used to be censorious of Ibrahim Badamasi Babangida finally met him for an interview. That meeting radically overhauled his opinion of the general. He told me—and other young reporters—that anyone who wanted to sustain his hatred and resentment of IBB should not get close to him. “You might go from hating him to loving him,” he said. For some reason, those words have stuck in my mind like glue.

Personal familiarity with people changes perspectives about them. I can guarantee that people who have met Boko Haram leader Abubakar Shekau have a view of him that departs radically from the mainstream characterizations of him.

This might seem like a wild stretch, but people who want to engage in a guilt-free denunciation of Shekau for all his atrocities should do so now while he is alive because in the aftermath of his death, we might be deluged with a cornucopia of syrupy tributes from people who had personal access to him and who can attest to his charm, warmth, humanity, faculty of humor, pan-Nigerianism, and intolerance to injustice. We might read how he was misunderstood and maligned by people who didn’t know him.

No one—not even Shekau, Hitler, Mussolini, etc.— is entirely bad. Personal, often privileged, access to otherwise notorious, reviled personages allows us to see their good sides. But should journalists court and cultivate the friendship of people in power to the point of becoming their spin doctors?

Anyone with even the most rudimentary familiarity with the ethics of journalism would know that journalists should not be chummy with the people they cover or comment on. The Society of Professional Journalists Code of Ethics enjoins journalists to “Refuse gifts, favors, fees, free travel and special treatment, and avoid political and other outside activities that may compromise integrity or impartiality, or may damage credibility.”

Many of us who write critical commentaries about governance have rejected opportunities to have privileged personal access to the people we write about. For instance, between 2018 and 2019, I repulsed invitations to meet with Atiku Abubakar or to join his campaign.

Similarly, a few northern governors and a minister had told me they had arranged a meeting between Buhari and me to “reconcile” our “differences.” I politely rebuffed their overtures. Sometime last year, a friend who is close to the inner circles of power in the Villa told me Abba Kyari had proposed to give me a “juicy” appointment that I couldn’t resist but that a minister and a top Buhari aide who know me personally said I would not only reject the appointment, I might disclose it publicly.

I don’t know how true this claim is, but the minister and the presidential aide certainly know me well enough to know that my criticism of the government isn’t animated by self-aggrandizement. If I wanted to be wealthy from access to people in government, the Buhari regime is one government where I would have “hit it big.”

I know more people at close quarters in the regime than I ever did in any government in Nigeria. I admit, though, that it is easy for me to sustain my independence and spurn invitations to partake in the looting of the public treasury because I have an independent source of livelihood as a university teacher in America.

You can’t say the same of journalists who work for newspapers that don’t pay salaries and that brazenly tell their reporters and editors to use their work ID cards as their “meal tickets.” For such reporters and editors, privileged personal access to people in power is an existential necessity. Their very survival depends on it.

The flurry of frenzied posthumous canonizations of Abba Kyari—and the revelations of the privileges that access to Kyari conferred— by supposedly detached, non-partisan journalists speak to the death of any pretense to ethical journalism in Nigeria.

Nonetheless, I’m generally an advocate for posthumous kindness to the dead, not so much because of the dead for whom such kindness is actually pointless but for the survivors of the dead. I lost my wife to a car crash in 2010. I can’t tell you how much the kind words written about her sustained me in my most difficult moments.

Whatever Abba Kyari was, he left behind a wife and children who didn’t make for him the choices that made him a byword for scorn and opprobrium. His family members deserve to read celebrations of his good deeds from people who are familiar with them.

In my December 3, 2011 column titled “Femi Kusa’s Perverse Dance on Ibru’s Grave,” I wrote that “it’s distasteful and insensitive to the survivors of the dead to so carelessly traduce their departed kin just days after his passing. Of course, clearly evil people who brought death and misery to large swaths of people are exempt from this consideration.”

What I have a lot of problems with is bending the truth to defend him, such as saying he had no influence in the Buhari regime, which is undermined by the fact that even serving governors, ministers, and senators want to occupy his position.

I also have problems with the demonization of people who are giving expression to their genuine angst over the untoward choices he made when he was alive. Kyari might not have been the devil, but he was no saint either.

A GROUP, Centre for Environmental Sustainability and Development Awareness (CESDA) has partnered with the...

CHATHAM House which recently hosted the presidential candidate of the All Progressives Congress (APC)...
Advertisement

Chat us on WhatsApp
Advertisement
Previous articleREPORT: How COVID-19 lockdown is pushing low, middle class Nigerians to the wall without palliatives
Next articleCOVID-19: Lockdowns are ineffective in Africa, without sustainable economic plans for citizens – Charles Soludo, Former CBN Governor