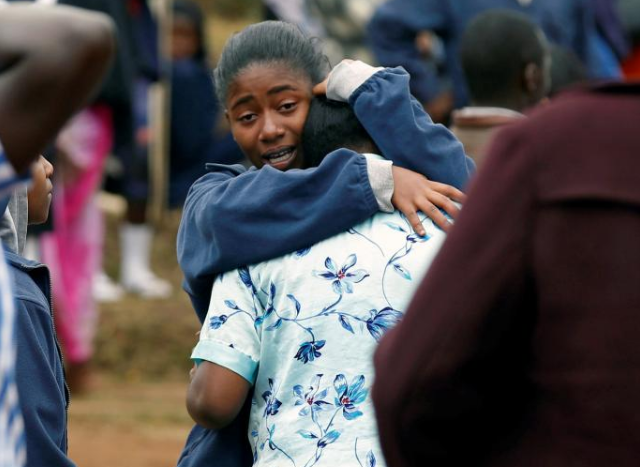 Seven Kenyan schoolgirls were killed after their school dormitory was engulfed by fire in the early hours of Saturday.

According to Reuters, 10 other female students have been hospitalised as a result of the fire incident.

Fred Matiangi, Kenya’s Minister of Education, said the cause of the fire was yet unknown but the school had been ordered closed for two weeks to allow a detailed investigation.

“A fire broke out at the school at 2:00am in the morning in one of the dormitories,” said Matiangi.

He also noted that the school, which has nearly 1,200 students, is “one of our top schools in the country and… (one) that we are very proud of”.

Reuters reports that fire incidents have claimed the lives of dozens of Kenyan boarding school students in the past.

In 2001, 58 schoolboys were killed in a dormitory fire at Kyanguli Secondary School outside Nairobi, and in 2012, eight students were killed at a school in Homa Bay County in western Kenya.

The fires could be attributed to lax safety standards and poor emergency procedures.

Daniella Maina, a 16-year-old student of the school, told reporters that they were sleeping when “a girl woke us up and said that our hostel was burning. We were helped to safety by some teachers”.

Uhuru Kenyatta, Kenya’s President took to twitter to express his condolence to the families that have lost loved ones in the fire incident.

Kenyatta, who is still coming terms with the Supreme Court judgement annulling his election victory, also promised that adequate investigation will be carried out.

“I was deeply saddened and pained by news of last night’s fire at Moi Girls’ School, Nairobi,” he wrote.

“The young women touched by this tragedy are the best of us: diligent, committed to learning and prepared to make a difference in the life of the country they love.

“I mourn with the families who have lost loved ones, and I pray that those injured will recover quickly and fully. The families affected, as well as the school and all who wish it well, can be sure that we will investigate the matter fully and act appropriately, so that this sort of tragedy doesn’t recur.”

Chat us on WhatsApp
Advertisement
Previous articleWe were close to nabbing Shekau, says army as it extends 40-day ultimatum
Next articleNepotism and ethnicity have taken over ‘the entire police force’, says Abubakar Tsav