It was a Monday morning, Chris Steven was waiting at the popular Car Wash bus stop at Lugbe, along Nnamdi Azikwe International Airport, to catch a bus to Area 1, where he operates a boutique.

As he waited with other commuters, a 2015 Toyota Corolla on its way from the airport had a burst tyre and skidded off the road straight into the concrete drainage with all its occupants − four of them including the driver.

Almost immediately, bystanders rushed to rescue the passengers in the car, who all sustained injuries. While they struggled to pull them out of the wreckage of the car, Steven who was familiar with the Emergency Response Ambulance Bay (ERAB) and the response rate, brought out his mobile phone to call for ambulance service.

But he was disappointed when he dialed 080CALLNEMA and the line was not available. Again, a good Samaritan, rushed down to the location of ERAB at Lugbe interchange − but to his chagrin, what was found was a stripped facility with no ambulance or a fire fighter vehicle.

The victims needed urgent medical attention but there was no ambulance in sight and no para-medics available.They were later taken in a private vehicle to an undisclosed hospital.

This was when Steven and others at the spot of the accident realized that, Abuja, Nigeria’s seat of power cannot afford to have any emergency situation that warrants rapid response by the National Emergency Management Agency (NEMA) – it may be disastrous – the Emergency Response Ambulance Bays (ERABs) in the city are moribund.

Three out of the five ERABs inaugurated between 2013 and 2014 in Abuja− in Lugbe, Bill Clinton Drive along Nnamdi Azikwe International Airport and Federal Ministry of Foreign Affairs at Three Arms Zone are no longer functioning, the ICIR can authoritatively report.

The remaining two are situated at Kubwa express road and Nyanya. The facilities were established to reduce loss of lives and property and increase response time during emergencies and disasters.

Each one of them is equipped with a Mobile Intensive Care Unit (MICU), a fire fighting vehicle and is manned by 12 staff that run three shifts a day.

When ICIR reporter visited the Federal Secretariat ERAB which was commissioned in September 2014 by Sani Sidi, former Director General of NEMA, there was no staff of the agency on ground. NEMA officials assigned to the facility are being owed 17 months shift and emergency response allowances, the ICIR learnt.

An official of the agency who declined to be named said the shift and emergency response allowances “is just N500 daily and N15000 monthly.”

But Samuel Bitrus, Coordinator, NEMA Abuja NEMA Operations Office, told ICIR that the staff were seconded to the just concluded conference of the African Chief of Army Staff holding at Transcorp Hilton.

But that is not all about the facility; the Mobile Intensive Care Unit (MICU) or an ambulance and a fire fighter vehicle stationed at the bay, ICIR gathered were just for window dressing. The fire fighter vehicle had no battery while the fuel tank of the MICU was empty.

Showing apparent traces of neglect by the management of NEMA, the bay had no electricity to power some electrical installations at its underground such as ceiling fans and water dispenser to make it habitable for workers on shift.

A private security guard posted by NEMA to guard the facility confirmed that it had been preyed on by vandals who removed some of its installations including electricity and solar panels.

Beyond these deficiencies, the bay  with an opened ceiling and roof, suggesting that vandals were also in the process of removing the roofs cannot be said to be fit for human habitation.

The camp mattresses provided for officials who run shifts at the bay was also an eye sore, while human defecation and waste dot its surrounding.

However, the Lugbe ERAB is no longer there – it was the first bay constructed in Abuja and the prototype, after which others were designed.

It is completely stripped to only irons reminiscent of a musical concert stage. No thanks to vandals, who took advantage of poor security arrangement around the facility to remove all its accessories including the roof, body panels, solar panels, bore-hole machine, overhead water tank,ceiling fans among others.

Despite this, NEMA posted two security guards in October 2017 to secure the skeleton of Lugbe ERAB.

They told ICIR that vandals come at night to remove parts of the facility, since they (the security guards) are not armed with any weapon, and do not work at night.

“We always come in the morning and realise that some things are missing,” said one of the security guards, adding, “because we don’t have weapons, our oga advised us to always go home at night.”

This is the real reason that victims of accidents on the ever-busy 10-lane Umaru Musa Yar’Adua express road cannot get first aid treatment or immediate rescue.

When the reporter visited the MICU stationed at the ERAB on Bill Clinton Drive, about 35 kilometres from the Nnamdi Azikwe International Airport, he was told it had no battery, while the Air Conditioner was faulty.  Out of the four staff expected to be on duty, only one of them was available.

According to the NEMA official who pleaded for anonymity, the management of the agency was oweing them 17 months rescue allowances.“Even, if there is any emergency at the airport or on this road we cannot respond because what we will work with is not functioning,” he said, “we have not received our shift and emergency allowances since 2016.” 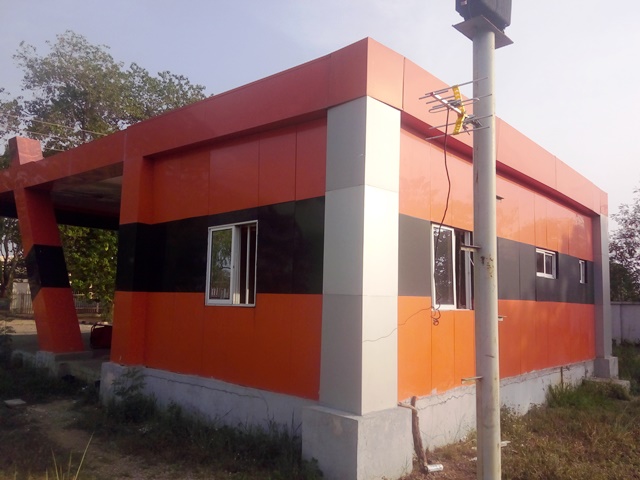 But ERABs are not the only facilities under NEMA that are not working− its Call Centre, where distress calls are directed has been shut down since last year, ICIR gathered.

The Mission Control Centre (MCC) at the headquarters of the agency, whose primary duties include detecting distress alert signals transmitted at a frequency of 406MHZ, from beacons mounted on aircrafts, water borne vessel and land users is also not functioning.

The Emergency Response Team, also at the headquarters, ICIR found out has been down.

A member of the Association of Senior Civil Servants of Nigeria (ASCSN) NEMA Unit who also pleaded for anonymity blamed the declining fortune of NEMA on the poor political will of the management of the agency, under the leadership of Mustapha Maihaja, its current DG to continue with the programmes of the past leadership of the agency.

“If you go to Zonal and Operation Offices in Kaduna, Port Harcourt, Owerri, Sokoto and Ekiti, all the vehicles there are not working.

“Look at this Lugbe ERAB, if you see it when it was newly constructed and now that it’s vandalized, you will weep for this country. But the DG lives on this road and sees it every day, and nothing is done. He is not interested in it.”

WE ARE READY FOR EMERGENCY

But Bitrus who oversees NEMA Operations in the FCT said two of the ambulances are currently engaged.  “We are working on them now, they supporting the African Land Forces that is going on now.”

So, they are serviceable, they’re are working. They are in good shape. Even, the one in Kubwa also, is working.

He insisted that all the vehicles are in good shape, noting that all the staff were deployed to the African Land Forces Conferences arguing that they can respond anytime from there including the one at AYA.

When reminded that the MICU at the Federal Secretariat had not moved for some time, Bitrus said, “yeah, the one you saw is faulty. That one is faulty, that one cannot move. They are two, if you noticed around last week, they were two.”

On what measures are being made to put the MICU in good shape, he said, “we have actually written to our management and we are waiting for their reply.”

He also denied as untrue that the operation staff were owed 17 months. “It’s not true, everybody receives his salary every month, what happens is that those people go there as part of their normal activities, they don’t report to the office, they report to the ambulance bays.”

Bitrus said he has no authority to comment on the Call Centre and the MCC that are not working. But he was quick to add that the FCT is ready for any emergency response saying, ” emergency response is a multi-sector activity. So we have sister agencies that we do this together. So we are prepared.”

Buhari and the ‘lazy youths’