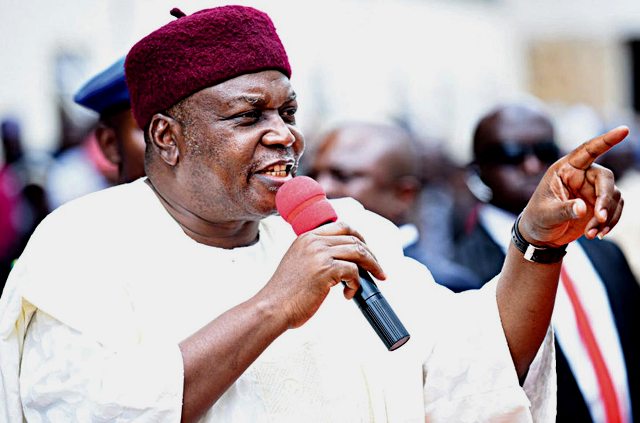 Darius Ishiaku, Governor of Taraba State, says unknown persons use helicopters to drop arms and ammunition at night for hoodlums in the state, yet the police and other security agencies are doing nothing about it.

Ishiaku also lamented the impact of killings by herdsmen on development in the state, saying “God gave us good land, but we lack common sense”.

He made the claims when a delegation of the leadership of the Peoples Democratic Party (PDP) led by Uche Secondus, the National Chairman, paid him a courtesy visit in Jalingo.

Ishiaku said the security apparatus of the country needs to be urgently reviewed to ensure better protection of citizens’ life and property. He decried a situation where a state police command needs to get clearance from the Police Headquarters in Abuja before responding to a potential security threat.

According to Ishiaku, the tensed security situation in Benue State is no different from what presently obtains in Taraba.

“We buried 63 people at Lau, the same day that Benue State buried 73 of its people. We are in trouble in this country,” Ishiaku said.

“When I assumed office, I asked my people to give me peace and that I would give development in return. Peace is elusive in Taraba, but we have development. Here I am as a Governor with a crown, but without a sword.

“You call police and security agencies for help, they will tell you they need to clear from Abuja before acting. Before you know it, you have lost 100 people.

“When you call for help, the help takes ages to come. We need to restructure the security architecture of this country. You take one step forward as the Governor, the almighty Federal Government takes you back 10 miles.

“The police we have can’t help themselves. In 10 days’ time, we will be attacked. Helicopters dropped arms here at night for hoodlums.

“We will talk because if the Federal Government cannot help us, let those who can help us come to our aid.

“Our farmers cannot travel at night with their goods to neighbouring states to sell again. God gave us good land, but we lack common sense.

“I’m talking now since writing has not produced the desired results. Some of these things are not meant to be said, but we will henceforth be talking.

“If our voices are not heard in Abuja, they can be heard in Kano, Niger Republic, United States of America and other places.”

When contacted, David Akinremi, Taraba State Commissioner of Police, said the command has not received any letter from the State Governor.

“As far as I am concerned, I have not received any letter from the Governor. I am not aware that the Governor informed us about any impending attack,” Akinremi told journalists.

A total of 168 Nigerians were killed in clashes between herdsmen and farmers in Adamawa, Benue, Taraba, Ondo and Kaduna states in January 2018 alone, according to a report by Amnesty International. But many say the number could be higher, as a lot more cases of violent killings were unrecorded and unreported.

We will apply our full weight against terrorists, bandits…