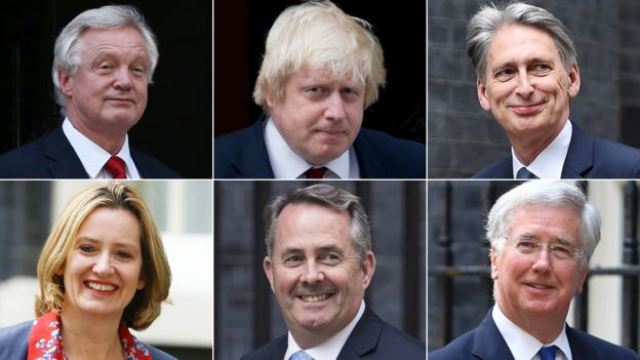 New British Prime Minister, Theresa May, has made sweeping changes in her first full day in office as she forms a new government.

First to get the boot was Michael Gove, former justice secretary under David Cameron, who has been replaced by Liz Truss.

Gove was one of the leading figures in the campaign to leave the EU and also contested for the PM position, but he came a distant third at the final round of voting by the parliamentarians.

Culture Secretary, John Whittingdale, didn’t make it either; but Health Secretary Jeremy Hunt retained his post and Philip Hammond is the chancellor.

Amber Rudd took over from May as Home Secretary, David Davis was made Brexit Secretary and Liam Fox took up a new post of Secretary of State for International Trade.

Andrea Leadsom , who pulled out of the race for the conservative leadership, was appointed Secretary of State for Environment, Food and Rural Affairs.

Perhaps the most surprising of May’s appointment so far is Boris Johnson, former Mayor of London and a key Brexit campaigners, who was appointed as Foreign Secretary.

Analysts had likened Johnson to US Republican presidential front runner, Donald Trump, due to the brazen manner with which he pursued the Brexit campaign.

He was wildly thought to be the next in line for Prime Minister before he ruled himself out.

Chat us on WhatsApp
Advertisement
Previous articleHouse Of Rep Members’ Sex Scandal Hearing Stalled Due To Absence Of US Ambassador
Next articleGov. Gaidam Calls On UN To Scale Up Humanitarian Intervention In Yobe