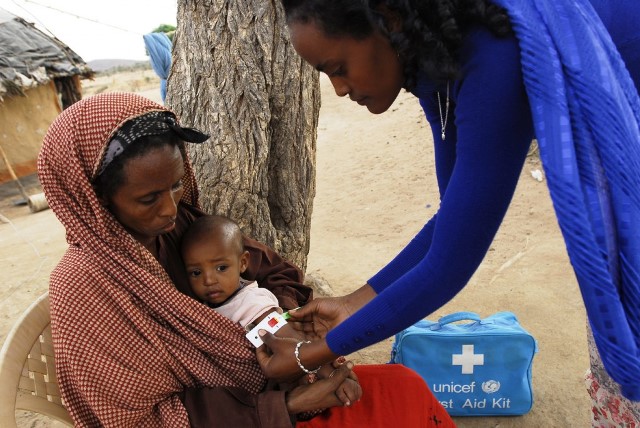 Over 22 million children are left hungry, sick, displaced and out of school in four crisis-torn countries including Nigeria, Somalia, South Sudan and Yemen as a result of drought occasioned by armed conflict, the United Nations Children’s Fund, UNICEF, has said.

UNICEF Director of Emergency Programmes, Manuel Fontaine, in a press release on Tuesday said that time was no longer on the side of these children and urgent action must be taken.

Fontaine recalled that famine had already been declared in South Sudan, noting that Nigeria was in the list because of the Boko Haram crises in the country’s North East.

“Children can’t wait for yet another famine declaration before we take action,” he said.

“We learned from Somalia in 2011 that by the time famine was announced,untold numbers of children had already died. That can’t happen again.”

The UNICEF chief said that nearly 1.4 million children are at imminent risk of death this year from severe malnutrition.

He further said that UNICEF will require close to $255 million to provideprovide these children with food, water, health, education and protection services for just the next few months, according to a new funding update.

He said: “Most of the funds – over $81 million – will go towards nutrition programmes to screen children for malnutrition and provide them with therapeutic food.

“An additional $53 million will be allocated to health services including vaccinations, while over $47 million will go to water, sanitation and hygiene programmes to prevent potentially deadly diahorreal diseases.

“The remaining funds will help protect children affected by conflict and displacement and provide them with education services. Cash assistance will also be offered to the most vulnerable families.

“The resources needed over the next few months are part of a broader appeal for all of 2017, totaling $712 million – a 50 percent increase overfunding requirements in the four countries at the same time last year.”According to statistics cited by Fontaine, UNICEF is expected to reachreach about “3.9 million people with emergency primary healthcare services this year, treat 220,000 severely malnourished children under the age of five, and provide more than a million people with access to safe water.”

“In Somalia, UNICEF is supporting 1.7 million children under-five years of age, including the treatment of up to 277,000 severe acute malnutrition cases through facility-based and mobile health and nutrition services.

“In South Sudan, UNICEF, together with partners, has delivered life-saving assistance to 128,000 people in areas affected or threatened by famine,including almost 30,000 children under the age of five.

Fontaine also called for unconditional, unimpeded and sustainable access to children in need and an end to the violations of children’s rights in the affected countries.

He also warned that the humanitarian crises are fast spreading across the Lake Chad regions.

“As violence, hunger and thirst force people to move within and across borders, malnutrition rates will continue to soar not just in these four countries, but also in the Lake Chad basin and the Greater Horn of Africa.

“If humanitarian agencies do not get the access and resources they need to reach the most vulnerable, lives will be lost,” Fontaine said.

Chat us on WhatsApp
Advertisement
Previous articleMilitary Admits Shekau Not Dead, But Is On The Run
Next articleTrump Orders Scrapping Of Obama’s Climate Change Policies