WHEN the dust of controversy in the University of Lagos finally settles, facts will become clearer as to whether or not, Professor Oluwatoyin Ogundipe, the 12th Vice-Chancellor of the institution, misappropriated the institution’s resources and violated several provisions of the laws, including paying for bogus contracts, contract splitting,  disregard of due process and abuse of approval limits.

According to the report of the Council Committee on the Review of Expenditure of the University of Lagos between 2017 and 2018, the professor of Botany engaged in “financial recklessness” and “abuse office”, amounting to breach of the Public Procurement Act 2007, Financial Regulations Act 2009 and the university’s guidelines.

First, the Committee report and the documents of transactions sighted by The ICIR, show that between 2017 and 2018, a total of 159 million was paid to companies by the former Vice-Chancellor without contract awards or the approval of the tender’s board and the Finance and General Purpose Committee (F&GPC) of the university. This action is a clear violation of Section 17 of the Public Procurement Act 2017.

In his defence, the former Vice-Chancellor argued that the approval of the contract renewal for the companies was delayed because of a strike action by lecturers. He argued also that petitions from aggrieved parties delayed Tender Board’s action.

The Council, however, was unpersuaded by this explanation. It noted that the strike referred to by Ogundipe started only in December 2017, whereas the contract renewal commenced in October 2017, three months before the staff went on strike. And when the former VC had the opportunity to seek approval for the contract during the Council’s meeting in January, it was observed that he did not do so.

Promptly, the former VC justified his action by reminding the Committee that the university by convention has been paying the two companies since 2004 to prevent the breakdown of law and order on campus.

“This is a convention instituted since 2004 during a period of several upheavals on campus which led to the breakdown of law and order, cultism at its height, burglary and lots of insurgencies from neighbouring communities. The university was advised to engage different security outfits unit in the university. These expenditures have been in existence since then,” the former VC explained.

The Council, highest organ of the university administration, therefore, concluded that “engagement of the security outfits was done in total violation of the Public Procurement Act 2017 and the University of Lagos Financial Regulations of 2016.”

In his defence, Professor Ogundipe said  that a change in the venue of the convocation was responsible for the increase, but the Council frowned at the unilateral decision of the former VC that cost the university nearly N10 million extra and notified him that the extra-budgetary spending is a violation of PPA 2017 and the University Act.

A case of contract splitting estimated at N78 million was also levelled against Professor Ogundipe. The Tender’s Board approved the purchase of three cars from Briscoe PLC to Deputy Vice-Chancellor (Management Service), Deputy Chancellor (Development Service) and the Bursar at the cost N78 million. The amount was above the Tender’s Board approval limit of N50 million.

Ogundipe who chaired the Board countered the claim, saying the approval for the car purchase was obtained at different times– 29th January and 19th February, – and therefore the purchase “did not exceed the approval threshold of the Tender Board”.

According to the 59-page report obtained by The ICIR, the former Vice-Chancellor granted several other contract approval which the Investigative Committee described as “very suspicious”.

One of them is the approval to renovate the quarters of the principal officers of the University, including the Vice-Chancellor, estimated at the cost of N112.5 million. Among the five officers, the renovation of the VC’s lodge alone gulped N49 million.

Speaking on Sunrise, a programme of Channels Television,  Unilag Pro-Chancellor/Chairman of Council, Wale Babalakin, said the amount spent on renovating the VC’s lodge is enough to build a new apartment.

He said the former VC spent N49 million renovating his residence which was left in excellent shape by his predecessor “without even mentioning it, not to talk of approval.”

But Professor Ogundipe noted that N49 million is not only for renovation but also for the purchase of furniture as the former VC left with the furniture in the lodge.

The Council Committee headed by Dr. Saminu Dagari, a professor of Chemistry from the of Federal University, Gashua reported that Unilag, proudly referred to as the “University of First of Choice” was poorly run by Professor Ogundipe.

On the Channels TV programme, Babalakin said none of Ogundipe’s actions “followed the proper process.”

He, therefore, invited the former VC to a debate on the expenditure of the University in the last three years.

The ICIR contacted Professor Ogundipe for further comment on many of the issues raised in the report but he did not respond.

A WhatsApp message sent to him on Sunday, August 14, was ignored, though there was an indication he was online.  He also did not respond to subsequent messages.

The ICIR contacted him via SMS on August 16, he also did not reply to the message.

At 4:37 pm on Thursday, August 20, The ICIR called the former Vice-Chancellor. He answered but told the reporter to call back. “Please, call back I am in a meeting,” he said after introduction.

At 7:26 pm, another called was placed, but he did not answer it.

Based on the Council’s investigation, Professor Ogundipe was removed from office through a letter dated Wednesday, August 12. The Council cited as reasons “serious act of wrongdoing, gross misconduct, financial recklessness and abuse of office.”

By his removal, Ogundipe will be the third Vice-Chancellor that has been removed from office in Unilag. Before him, was Professor Jelili Omotola who was appointed as VC in 1995 and was asked to resign in 2000. 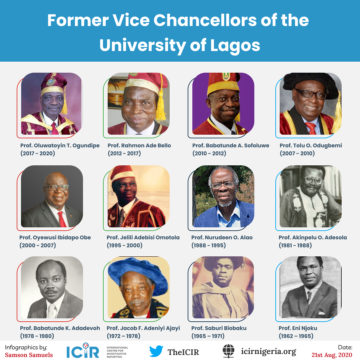 Professor Omotola also locked horns with the University Council headed by Chief Afe Babalola, SAN as Pro-Chancellor. The late professor of Law was accused of establishing a Korean Outreach Centre for Unilag without the approval of the University’s Council and Senate, among other infractions.

The first chancellor of Unilag, Eni Njoku, who also was a professor of Botany was removed, but not on account of fund mismanagement or financial recklessness.

Meanwhile, the Academic Staff Union of the University, ASUU, Unilag Chapter, has faulted Ogundipe’s removal. It says that the action is illegal.

Article 17 of the University of Lagos of 1962 states how the Pro-Chancellor and certain members of the Council can be removed from office.

“If it appears to the Council that a member of the Council (other than an ex-officio member) should be removed from office on the grounds of misconduct or inability to perform the functions of his office, the Council shall make a recommendation to that effect through the Chancellor to the Visitor and if the Visitor, after making such enquires (if any) as he considers appropriate, approves the recommendation, he may, by any instrument on writing signed by him, remove the person in question from office.” Also, First Schedule 4 (8) of the Act states that the Vice-Chancellor may be removed from office by the Visitor after due consultation with the Council and the Senate acting through the Minister of Education.”

The Visitor to the university is the President of the Federal Republic of Nigeria. And ASUU has argued that the Council failed to comply with this provision in the removal of Professor Ogundipe as the Vice-Chancellor.

UPDATE:
The federal government yesterday directed both the pro-chancellor and the sacked vice-chancellor to step aside from their official duties pending the finding of a Special Visitation Panel set up by President Muhammadu Buhari to resolve the crisis in the institution. 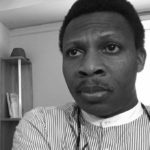 Chat us on WhatsApp
Advertisement
Previous article
Why we dropped El-Rufai from list of NBA conference speakers, president speaks
Next article
IGCS named Nigerian, six others for its annual global award