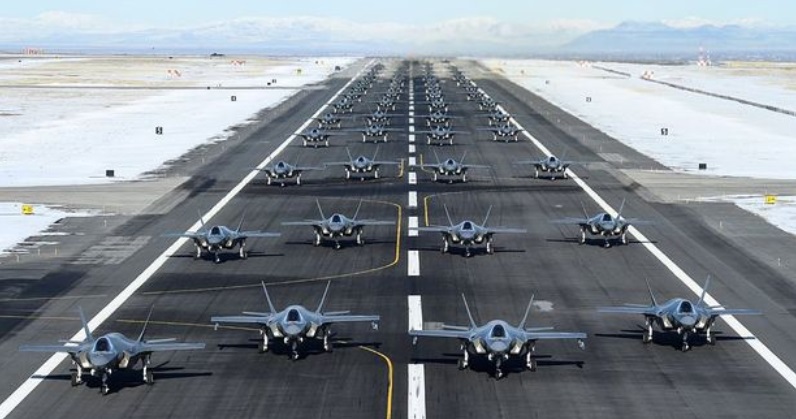 The US Air Force showcased its strength as the United States acts in anticipation of Iran’s response to the killing of its top General, Qasem Soleimani, as they have promised to avenge the death of their leader.

The  52 F-35A aircraft said to be worth N1.5 billion took off in quick succession from the Hill Air Force Base in Utah, US, on January 7, Mirror reports.

The 388th Fighter Wing in a Facebook post announced that a combat power exercise was carried out with the fighter jets after it had been planned for months.

The post informed that the Fifty-two aircraft were used in the drill conducted by the active-duty 388th and Reserve 419th Fighter Wings. It also stated that four years after receiving its first combat-coded F-35A Lightning II aircraft the fighter wings have achieved full warfighting capability.

The launch of the fighter jets appear to be in direct contrast to the position of the Pentagon, the headquarters building of the United States Department of Defense, where Defense Secretary, Mark T. Esper, stated that targeting 52 cultural sites, as per Trump’s threat, would be a war crime, promising that the US would follow laws of armed conflict.

Despite the brewing conflict and escalating tension, living past US presidents, including Barack Obama, Bill Clinton and Jimmy Carter are silent on the matter, the ICIR earlier reported.

Meanwhile, a subtle threat has been issued by Iranian adviser Hasameddin Ashena, who, on his Twitter page, shared a link to Forbes’ article listing all of President Trump’s property. The properties include Trump Tower at 40 Wall Street in New York, Trump International hotels in Washington, Las Vegas and Chicago, golf courses and two private airplanes.

Chat us on WhatsApp
Advertisement
Previous article
CBN releases new framework to address payment system risks in Nigeria
Next article
Declaring asset publicly is not in our constitution, Buhari will not declare ─ Femi Adesina