We shall hold government accountable in 2018, says Wabba 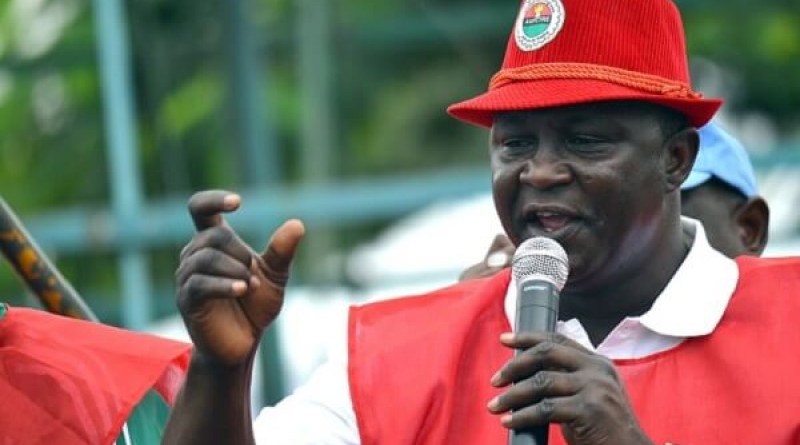 Ayuba Wabba, President of Nigeria Labour Congress (NLC), has said that the Congress would not fail to hold government accountable in the New Year.

In his New Year message to Nigerian workers, Wabba commended them for their resilience in surviving and pulling through the year 2017, which he noted proved to be one of the most difficult for most Nigerians in recent history.

The out-gone year, he said, saw working people, pensioners and other Nigerians face series of daunting socio-economic and security challenges.

Wabba spoke on the socio-economic situation in the country, unpaid workers’ salaries, fuel scarcity, war against corruption among other issues.

The statement read in full

On behalf of the National Executive Council of the Nigeria Labour Congress, I wish to congratulate Nigerian working people and pensioners for their resilience in surviving and pulling through the year 2017, which proved to be one of the most difficult for most Nigerians in recent history.

The previous year saw the working people, pensioners and other Nigerians facing series of daunting socio-economic and security challenges, even though we had hoped that the year would offer succour for the masses of the people.

The deplorable economic situation in the outgone year is aptly captured by the statistics recently released by the National Bureau of Statistics (NBS) which indicated that over 4 million Nigerians lost their jobs in 2017. Against the background of the campaign promise of the ruling All Progressives Congress (APC) government to create three million jobs annually, this statistics from the NBS underscores the grave and depressing situation of the Nigerian economic landscape in 2017.

Rather than work to create jobs and improve the condition of Nigerian working people and Nigerians in general, leading elements in the ruling APC government, like Governor Nasir el-Rufai, have been taking measures to further chastise and ruin Nigerians by throwing tens of thousands of workers into the already saturated unemployment market and wretchedness.

In the same vein, despite the huge revenue that the states have received through the Federal Government intervention funds to clear arrears of unpaid salaries and pensions in many states of the federation, coupled with additional payment of three tranches of windfall, (Paris Club debt refunds), states like Kogi, Osun, Benue, Ekiti, Bayelsa and several others entered 2018 with huge arrears spanning up to ten (10) or more months of wages and pensions.

Under these conditions, Nigerian workers, pensioners and their families remained the most despondent group in an economy that even the well-to-do are groaning and struggling to survive. No wonder,  our country is one of the worst, known for having many hungry people in the world according to the World Hunger Index report 2017.

FUEL SCARCITY AND THE PETROLEUM INDUSTRY

In the last three weeks, Nigerians have witnessed one of the worst shortages in the supply of petrol in the history of the country. This is in spite of Federal Government’s repeated claim that with the complete removal of subsidy on petroleum products, scarcity of petroleum products would become a thing of the past.

For us in the Congress, our position with regard to the prevailing situation in the petroleum industry remains constant, which is that the crisis in the industry is squarely due to the inability or refusal of our ruling elite to REFINE ALL OUR PETROLEUM NEEDS IN NIGERIA. We are the only major producer of crude oil in the world that depends on importation of refined products from abroad. As long as this remains the case, Nigerians would continue to be subjected to this intermittent scarcity.

We had explicitly stated this fact in our 188-page “Report of the NLC Committee on Deregulation”, submitted to the Yar’Adua government in 2010 and which we gave to top officials of this administration when they assumed office in 2015. We wish to note that this report was a product of consultations with key stakeholders in Nigeria – from the Governors Forum (then under the chairmanship of Dr. Bukola Saraki as Governor of Kwara State, now the current Senate President), NNPC, Ministry of Finance, Major Markers Association of Nigeria (MOMAN) and CSOs, among others.

It was on the basis of the above conviction that the Congress went on national protest in May 2016, following the 66% increase from N86.50 per litre to N145 per litre, in the price of petrol by the current government in the name of total removal of subsidy.

For us in the Congress, and for majority of working people in Nigeria, the hope placed on the capacity of President Buhari to bring about positive change is being undermined by his government’s inability to address the infrastructural deficit and other related problems in the oil industry, such as making our existing refineries work at optimal capacity by refining products for domestic consumption. Not only is government unable to achieve this for almost three years now, but moving forward more refineries, especially modular refineries which can be built between 12 and 18 months are required to address the reoccurring challenge of fuel scarcity and price hike in Nigeria and stop the exploitation of ordinary Nigerians. The inherent corruption in the system has made this impossible for more than three decades and should be addressed headlong.

Following the recent inauguration of the tripartite National Minimum Wage Negotiating Committee by President Buhari, it is the expectation of Nigerian workers that the committee under the chairmanship of Ms Ama Pepple, former Head of Service of the Federation, will expeditiously conclude its assignment. This is because a new national minimum wage has been due for over a year now.

It is also our expectation that upon completion of negotiations, the National Assembly will give the executive bill that will emerge, an accelerated passage for the new national minimum wage to become a reality before the end of the 3rd quarter of 2018.

As we approach the 2019 general elections, workers will certainly not forget governors that subjected them to untold hardship by refusal to pay their earned entitlements on the excuse of scarcity of resources while choosing to pay themselves, their political appointees and cronies’ huge packages.

We therefore call on the State Houses of Assembly to demonstrate courage, patriotism and assert their desired independence by passing these constitutional amendment bills designed towards emancipating our local governments and freeing their finances from being usurped by governors who are determined to truncate the quest for democratisation at the local government level.

In the same vein, we call on the National Assembly and State Houses of Assemblies to ensure that payment of primary school teachers’ salaries is put on first line charge of the Federation Account to assuage the fears of all stakeholders in the local government system.

Over the years, the Congress has advocated for good governance as a basis for sustainable development of our country. We have in similar tone campaigned against corruption in our body politics, as this malady has remained the greatest impediment to our quest for national development.

We believe that the ascendancy of the APC to power was rooted on the personal integrity and anti-corruption pedigree of President Buhari. As we move into 2018, our expectation is that the executive arm of government would push for the implementation of key anti-corruption protocols and good governance principles in our public and private institutions.

In the same vein, we call on the government to increase the tempo of the fight against corruption in a way that is fair, just and all encompassing.

We wish to once again draw the attention the Presidency and Nigerians in general to the ongoing draconian leadership of the Kaduna State government under Mallam Nasir El-Rufai as governor. A couple of months ago, Governor el-Rufai by administrative fiat dismissed over 22,000 primary school teachers in the state under the excuse that they failed to pass assessment tests that the authorized teaching regulatory body did not conduct. Similarly, El-Rufai equally sacked over 4,500 local government employees in the state.

Despite the wise counsel of well-meaning Nigerians and protestations from the Congress, including an injunction from the National Industrial Court (NIC) which had ruled that the status quo should be maintained till the determination of the substantive suit brought before it by the unjustly dismissed workers and unions in Kaduna State, Governor El-Rufai, like all despots, has remained adamant.

While some state governments are struggling to devise ways of bringing succour to workers and the people generally in the New Year, Governor el-Rufai’s Christmas and New Year gift to the working people of Kaduna State and their families is tears and sorrow.

Under this atmosphere of disregard for the rule of law and decency, Congress is left with no other option than to use all legitimate means to challenge the crass impunity and despotism being displayed by Governor el-Rufai. It will therefore give effect to the Congress National Executive Council (NEC) decision to observe January 11, 2018 as a day of solidarity with the workers of Kaduna State, and shall mobilise Nigerian workers to march for the reversion of the sacked workers in Kaduna City.

GENERAL OVERVIEW OF THE STATE OF THE NATION

We note the positive sides of 2017, which include the fact that we statistically moved out of recession in the course of the year; the continuing fight against corruption, improvement in the security situation and some progress in agricultural yields; in addition to efforts to implement the macro-economic recovery measures.

The above indicators notwithstanding, the Boko Haram insurgency still poses challenges to our gallant armed forces; herdsmen rampage on communities and peasant farmers’ agricultural losses, occasioning responses, has remained significant threats to peaceful co-existence of our people in many states of the federation.  While the energy situation has slightly improved in recent times, there are still considerable obstacles towards the successful operation of the sector thus weakening the wellbeing of millions of Nigerians consumers – industrialists and micro-business operators alike.

We call on the federal government to therefore take further bold measures to address the above mentioned challenges to enhance an improved situation in these areas in 2018.