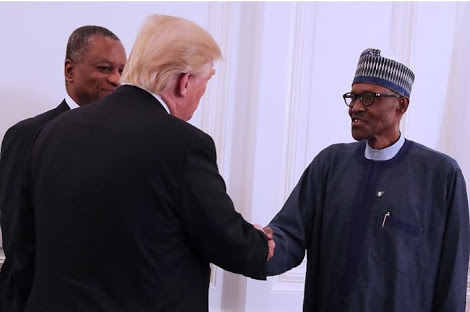 President Muhammadu Buhari has been likened to that father who goes to the house of his daughter’s suitor to announce that she is a prostitute.

I have honourably accepted the tag “lazy Nigerian youth” since the president went to the UK and told the world that “a lot of Nigerian youths are doing nothing”. It is in my accustomed moment of laziness that I write this piece.

But before Buhari goes to US President Donald Trump on Monday to toot some insalubrious ‘alternative facts’ about me and my country, let me rat out some facts about his administration.

I would like President Trump to know that human rights violations have hit the apogee under President Buhari.  In 2016, the Nigeria army summarily executed about 400 Shiites for “unlawful protest”.  The government has also kept Ibrahim El-Zazky, leader of the group, in detention for more than two years despite an order of court for his release. In fact, a few days ago, the police killed some members of his sect who were protesting against his incarceration in Abuja.

Also, in 2016, Amnesty International, human rights watchdog, released a report accusing the army of summarily executing more than 100 members of the Indigenous People of Biafra (IPOB).  Besides these acts of abuse, the government has arrested, intimidated and hounded journalists, political opponents and every person perceived to be opposed to it. I have received a few threats myself. In fact, in February, Amnesty International said Buhari’s government was “becoming too intolerant of opposition”.

Mr Trump, I would like you to know that Buhari’s much vaunted war on corruption is a farce. His government has spent three years targeting opposition figures while the real corruption shin-dig goes on under his nose. I do not need to cite the numerous examples; they are just a click away. And because I know you are not an analogue president. You know what Google is.

In March, Buhari’s government released a list of political opponents it dubbed “looters”. This list has no name of any member of his party. But President Trump, I must thank your government for rubbishing the “anti-corruption war” of the Buhari administration.  A few days ago, the US government released its 2017 human rights report saying that “massive, widespread, and pervasive corruption affected all levels of government and the security services”, under Buhari.

And finally, Mr Trump, tell President Buhari as he meets you on Monday, to pay attention to the killings across the country, and the galloping unemployment figure.

There is hunger in the land.
Thank you.

Fredrick is a writer, journalist and media entrepreneur.

In Search of selfless leaders for Nigeria

Nigeria 2019: The issues and electoral maths that will…