ON Saturday, August 10, the social media space was inundated with reactions as to why the official twitter account of the Vice President, Prof. Yemi Osinbajo was suspended.

The federal government last Thursday resumed the disbursement of the N10,000 Trader Moni for petty traders in Bayelsa state.

This generated mixed reactions among many people, with some alleging that the Trader Moni scheme was a tactical means of buying votes considering that the governorship election in the state  is just some months away.

Trolls on social media are people who deliberately provoke others online by saying inflammatory and offensive things. They promote hate speech, attack an opponent’s character and say things to appeal to people’s feelings rather than their intellect.

In reaction to the tweet, speculations by twitter accounts owners said the Vice President made a post about the Trader Moni which got his account reported for vote-buying and was later unverified and suspended.

A search of the Internet into previous tweets made by Osinbanjo using Wayback machine, an online tool that archives the internet itself debunks the speculation that the account was suspended on the ground of making a post on the Trader Moni because no post in that regard was found.

According to Twitter, the blue tick that indicates a verified account can be lost if the account intentionally misleads people by changing one’s display name or bio; if the account promotes hate and/or violence against, or directly attacks or threatens other people on the basis of race, ethnicity, national origin, sexual orientation, gender, gender identity, religious, affiliation, age, disability, or disease; Inciting or engaging in harassment of others; violence and dangerous behaviour.

From historical tweets recovered, no tweet from @profosinbajo appears to violate these conditions. Also from curated web shots, the name and bio remained the same, ruling out the first condition.

Again, according to Twitter, accounts can be suspended for the following reasons;

Spam: Most of the accounts we suspend are suspended because they are spammy, or just plain fake, and they introduce security risks for Twitter and all of our users. These types of accounts are against our TwitterRules. Unfortunately, sometimes a real person’s account gets suspended by mistake, and in those cases, we’ll work with the person to make sure the account is unsuspended.

Account security at risk: If we suspect an account has been hacked or compromised, we may suspend it until it can be secured and restored to the account owner in order to reduce potentially malicious activity caused by the compromise.

Abusive Tweets or behaviour: We may suspend an account if it has been reported to us as violating our Rules surrounding abuse. When an account engages in abusive behaviour, like sending threats to others or impersonating other accounts, we may suspend it temporarily or, in some cases, permanently.

According to Nana Nwachukwu, a public interest digital researcher, a common factor remains that somehow Twitter rules may have been violated not necessarily by the handle but in a manner that places the account security at risk, which also follows the same pattern of a troll attack on the account. This brings in the announcement by the Laolu Akande on attempted unlawful access to Osinbajo’s account.

Twitter operates through a community reporting system. Typically accounts like @profosinbajo which is verified and belonging to a high-ranking Govt official are usually suspended where suspicious activities are noticed by Twitter API.

On August 8, the federal government resumes TraderMoni in Bayelsa State 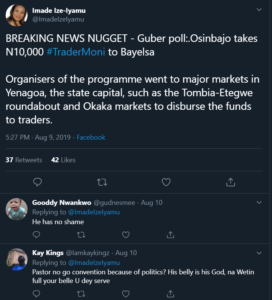 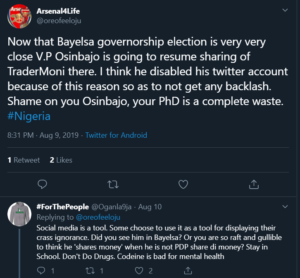 The last tweet by @ProfOsinbajo on August 8, 2019, was a retweet of NPower

On August 9, Web Capture from the account at 00:13:17 showed the account was still the same as above with no changes. (see image below)

At 16:13:35 hours, the Vice President’s account had become unverified with follower count down to 1.28million from 2.13million and following only 53 persons from 60 previous followings with only 3 tweets as against the previous 2,399 tweets. There is no current record of those unfollowed at the time. This showed a troll attack pattern.

At 22:50:19, the account was still down and showed the exact same image above. 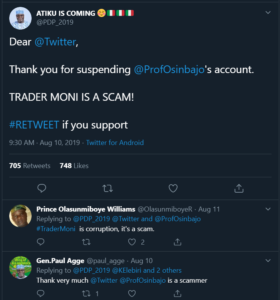 Reaction from the Vice-President’s Aide 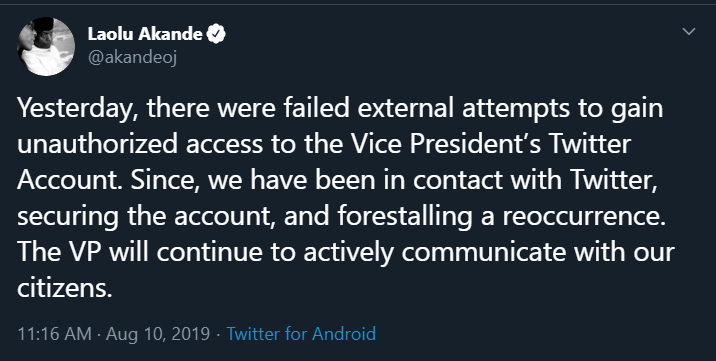 At 09:39:00, the account had been restored but without the verification and had the follower count down to 1.16million. It appeared the tweet archive had been deleted.

At 16:30:41 hours, the follower count had gone down to 1.1million followers (see image below) and the account was fully suspended.

At 01:55:20, the account appeared restored and follower count climbed up to 1.11million as in the image below. The account was unverified and still did not have an image or header.

At 12:40:36, the account was climbing up in followership count

Conversations around the Trader Moni and Osinbajo can also be tracked  here and here.

This report was put together by Damilola Ojetunde, Data Analyst at The ICIR and Nana Nwachukwu, a Public Interest Digital Researcher.