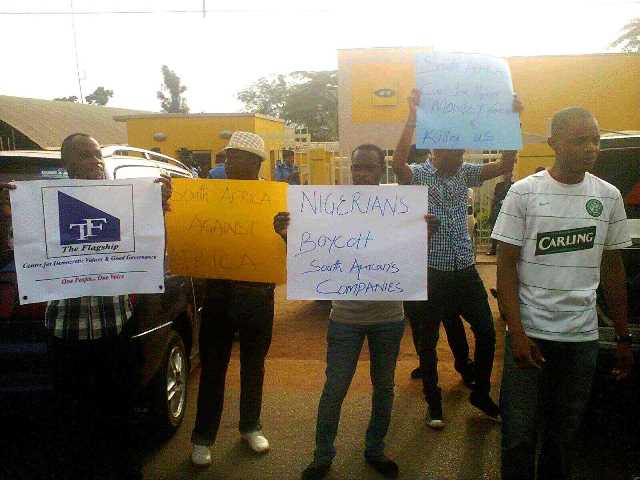 Following series of recent  attacks targeted at immigrants, particularly Nigerians in Pretoria, South Africa, Nigerian youths under the aegis of National Youth Council of Nigeria, NYCN on Thursday staged a protest in Abuja, the Federal Capital Territory, demanding that the South African government take proper measures to address the situation.

This week, at least 20 shops believed to belong to immigrants were looted in South Africa’s capital.

The protest which was organised by National Association of Nigerian Students, NANS  also moved to the South African High Commission in Abuja where they burned the country’s national flag.

The students, led by their president, Aruna Kadiri, moved from the popular Unity Fountain to MTN office in Maitama and Multi Choice in Central Area to protest against the renewed xenophobic attacks on Nigerian nationals in South Africa.

The protesting students also issued a 48-hour ultimatum to the South African nationals to leave Nigeria.

They also urged the High Commission officials to cancel the dinner organised in honour of Regina Tambo, the co-founder of ANC Youth League.

At the Ministry of Foreign Affairs, the students urged the government to take concrete action to protect Nigerians in South Africa.

Kadiri, while addressing newsmen, said “We are demanding that they should break the ties between both countries if there’s any because the xenophobic attacks that had happened long time ago has come again.

“We have decided to clear the madness with madness.”

He said they burned the South African flag at the High Commission to pass a message that “we don’t have relationship with them any longer.”

“Within 48 hours, all South Africans in Nigeria should leave or else, we won’t be able to guarantee their security any more,” Kadiri added.

Responding,  the spokesperson, Ministry of Foreign Affairs, Clement Aduku urged the protesting students to be calm as federal government is engaging in talks with its South African counterpart over the xenophobic attacks.

He also assured that all diplomatic means would be explored to stop the killings of Nigerian nationals in South Africa.

The protesters who marched to the MTN telecommunications headquarters in Maitama carried placards such as “South Africa we say stop killing our people” and chanted slogans denouncing the attacks.

It took the timely intervention of the police who condoned off the area immediately the protesters, who threatened to bring down the building arrived the area.

Windows and other items were said to have been broken by the protesters who eyewitnesses said entered the MTN office and snatched items from customers.

“They forcefully entered the MTN office. Security men were around but unable to curtail the protesters, who forced the gates open and entered the office,” a witness said.

“Some protesters were touts. Some were students. In the midst were some criminals that took away some customers’ phones and other things,” he added, asking not to be named.

The protest coincided with a visit by MTN chairman Phuthuma Nhleko to the Acting President Yemi Osinbajo.

On Wednesday, the National Association of Nigerian Students, NANS, announced that it would be holding a nationwide protest to draw global attention to the attacks on Nigerians in South Africa.

President of the association, Kadiri had described the xenophobic attacks as sad and unfortunate.