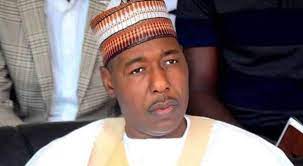 Zulum blamed the low salary on ghost workers in a statement published on his verified official Facebook page.

The governor, however, pledged that all primary school teachers in the state would get N30,000 minimum wage soon.

Zulum said his government was aware of the presence of unqualified teachers in the state public primary schools,  promising to retain them.

He said rather than sack the teachers, the government would train them.

He said those who could not be trained would be deployed to other departments in schools as non-academic staff.

Zulum, who was addressing the reconstituted Borno State Universal Basic Education Board at the Government House, Maiduguri, said: “One major issue in Borno’s primary education system today is the welfare of teachers.

“It is pathetic that there are teachers who are still collecting between N13,000 and N11,000. I want to assure, that despite economic challenges, we are working to ensure that every qualified teacher in Borno State earns a minimum of N30,000, which is the national minimum wage.”

The board has Prof. Bulama Kagu as its Chairman, Abubakar Mai Deribe, Sadiq Abdallah, and Habu Daja Aliyu as permanent members.

There are also representatives from relevant ministries in the state.

Borno has faced a decade-long insurgency, resulting in the loss of thousands of people and the destruction of infrastructure facilities.

The United Nations High Commissioner for Refugees (UNHCR) notes that the crisis has led to 304,562 refugees and the displacement of over 2.1 million people.

The Global Conflict Tracker says 350,000 people have died from the insurgency in North-East Nigeria since 2009.

Since he assumed office, Zulum has been paying unscheduled visits to public institutions, including primary schools in the state.

In February 2020, he met only Obiageli Mazi, who had taught for 31 years at the Shehu Sanda Kyarimi II Primary School, Maiduguri, in one of such visits.

The governor rewarded her with cash and promotion for being at work early enough.

Chat us on WhatsApp
Advertisement
Previous articleStay away from our elections, Buhari tells new envoys
Next article#MySARSStory: Innocent Blood