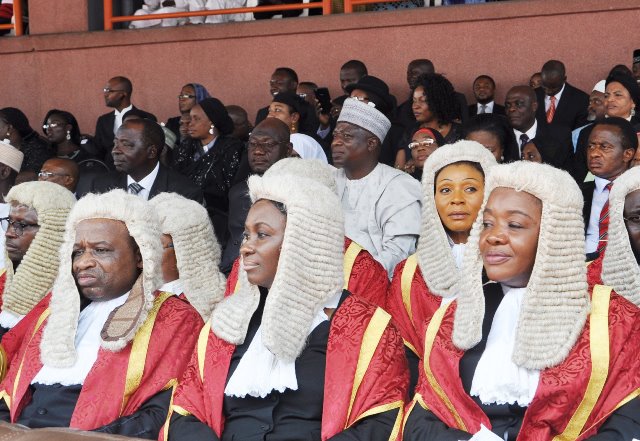 The Attorney General of the Federation and Minister of Justice, Abubakar Malami, SAN, has submitted the names of more judges to the Department of State Services, DSS, for investigation.

They included two Chief Judges of High Courts, three judges of different divisions of the Federal High Court, and a Justice of the Court of Appeal.

Reports say there had been several allegations against the judges and petitions had been written against them to the National Judicial Council, NJC between 2014 and 2016.

One of the petitions by Chairman of Civil Society Network Against Corruption, CSNAC, Olanrewaju Suraju, against a Federal High Court judge was dated May 12, 2016.

Another petition, dated February 26, 2016, and signed by Suraju, was titled ‘‘Request for investigation of contravention of the Code of Conduct by Judicial Officers.’’

Also in another petition, dated April 20, 2016, sent to the NJC against a Justice of the Court of Appeal and others, who served on an election petitions appeal panel this year, accused the panel of receiving N8m from a Senior Advocate of Nigeria.

According to a report by DAILY TRUST newspaper, sources say there was no excuse for the NJC not to have investigated the myriads of petitions so far written against the judges, since it was the only body constitutionally empowered to probe judges in Nigeria.

“Undoubtedly, if this type of deliberate inattentiveness; lethargy and benign neglect and dereliction of responsibility by the NJC is allowed to persist in an administration that came to power under the mantle of change, it will surely lead to the death knell of the judicial branch of government, which centrality the maintenance of law, order, rule of law and social harmony cannot be overemphasized.

“It is unfortunate that despite the preachment of the administration on the need for the judicial officers to be above board, we still have some of them that have stubbornly refused to change from their old ways,” the source was quoted as saying.

The DSS had arrested seven judges last weekend, adding that 8 others are still under investigation, bringing the total number to 15.

Large sums of money in local and foreign currencies were reportedly recovered from three of the arrested judges during the operations that lasted between Friday night and the early hours of Saturday.

Reacting to the arrests that has generated so much controversy, the Attorney-General of the Federation, Abubakar Malami, warned that “nobody, no matter highly placed would be spared in the current administration’s fight against corruption in the country.”

According to him, nobody is exempted from being investigated, not even the President, Vice President, Governors and their deputies who are covered by the immunity clause under section 308 of the 1999 constitution.

“The bottom line is that we have a responsibility to fight corruption. Corruption is a crime and nobody regardless of how highly placed is exempted as far as issues that border on crimes and criminalities are concerned.

Malami argued that even the constitution does not take away the right to be investigated.

“Once crimes and criminality are concerned, nobody is an exception. I think the undertone should be exclusively the consideration of existence of a prima facie case, existence of reasonable grounds for suspicion of commission of a crime.

“And if there are, no legislature, no judiciary and no executive can definitely be exempted from investigation. I think where we are now is the point of investigation and that is what is taking place”.

He reiterated the commitment of the President Buhari administration to the fight against corruption and urged the committee not to betray the confidence repose in them.