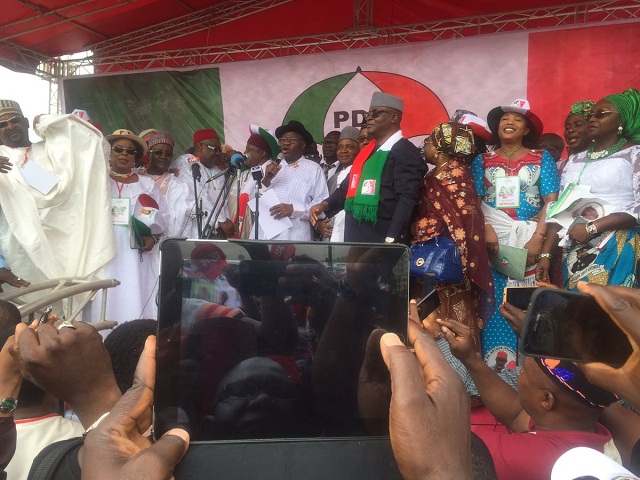 The ruling All Progressives Congress (APC) says the opposition Peoples Democratic Party (PDP) has nothing to celebrate on its 19th anniversary other than its legacy of gross corruption, typified by Diezani Alison-Madueke, former Minister of Petroleum Resources.

The party said this while replying a statement issued by the PDP on Thursday on the commemoration of the 19th year of its founding.

Among other things, the PDP had accused the APC-led federal government of destroying the independence of the country’s major anti-corruption agencies: the Economic and Financial Crimes Commission (EFCC) and the Independent Corrupt Practices and other related offences Commission (ICPC).

The PDP said the EFCC and ICPC were created during its 16-year reign to curb the menace of corruption in the country.

In the statement, signed by Chinwe Nnorom, PDP’s Head of Publicity Department, the party claimed to be the only viable, prosperous and most visionary political party in Nigeria.

“The PDP administration established two major anti-corruption agencies, the Economic and Financial Crimes Commission and the Independent Corrupt Practices and other related offences Commission to curb the menace of corruption in the country,” it said.

“These efforts reduced corrupt practices and further increased the confidence of foreign investors that resulted in huge investment inflows into the country.

“The APC-led government of today has destroyed the independence of these agencies with their selective approach of using ‘deodorants’ when APC members are involved and ‘insecticides’ when it concerns the PDP members and other Nigerians.”

In reply, however, the APC said it was rather unfortunate that the PDP has no iota of shame after looting Nigeria to almost a standstill.

Bolaji Abdullahi, APC’s National Publicity Secretary, said evidences were abound as to how the PDP almost crippled Nigeria with massive looting of the country’s resources.

“Instead of saying our party has destroyed EFCC’s independence, they should contradict the billions of naira, dollars and pounds recovered from its members who held positions of authority in the past,” Abdullahi said.

“If they want to lay any claim to moral superiority, they should refute evidence adduced by the EFCC about the recovery so far made, then we can talk.

“Let them challenge the verdict of a competent court of our land which recently ordered the permanent forfeiture of property and billions of naira in cash belonging to Diezani Alison- Madueke.

“If they can successfully challenge all these, then they can speak. As for them returning to power, Nigerians are now wiser.”

Similarly, Okoi Obono-Obla, Special Assistant to the President on Prosecutions, described the PDP as “chronically and scandalously corrupt”.

“The PDP does not have any argument because since the APC government came on board, the EFCC has become so efficient.

“In the first quarter of this year, the EFCC secured more than 200 convictions and recovered over N400bn.

“How much was recovered by the EFCC when the PDP was in government or when Goodluck Jonathan was in office?

“The PDP should shut up. The PDP was chronically and scandalously corrupt to the extent that one minister stole the equivalent of the allocations of 19 northern states in four years.

Itse Sagay, Chairman of the Presidential Advisory Committee Against Corruption (PACAC), advised the PDP to mark its 19th anniversary with sober reflection instead of making empty boasts.

According to Sagay, the major thing to remember about the PDP is that Alison-Madueke was one of its products.

“I am disappointed in the PDP. If they are celebrating 19 years, they should celebrate with caution and give the nation an assurance that they would not bring such negative impact on our nation again and they have turned a new leaf.

“They destroyed our economy; their greed was overwhelming. If you look at Diezani for instance, there is no day that goes by that money is not recovered from her.

“In Thursday’s papers, it was reported that the EFCC had recovered about half a trillion naira from these people.”