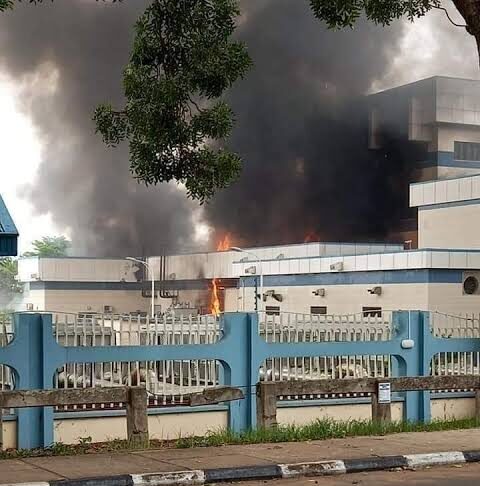 A FIRE incident occurred at the Makurdi, Benue State branch of the Central Bank of Nigeria (CBn) on Thursday.

The early morning fire engulfed part of the CBN office situated at the Old GRA area of the Benue State capital.

The fire reportedly started from the fuel dome at the CBN building.

As of the time of this report, the cause of the fire is yet to be determined.

Eyewitnesses said the fire started around 7:00 am but the intervention of men of the Fire Service prevented further spread to the entire building.

The Director of Benue State Fire Service, Donald Ikyaaza, confirmed the incident to Daily Trust, saying that he deployed firefighters to the building after receiving information about the fire outbreak.

“It was actually a huge fire which started at the company’s fuel dome but my men rushed to the scene and put out the fire before it could spread to other parts of the bank. Everywhere is calm now,” Ikyaaza said.

Chat us on WhatsApp
Advertisement
Previous articlePDP rakes in N646 million from sale of forms to 17 presidential aspirants
Next articleInsecurity: Buhari meets with service chiefs, ministers