EMBARRASSING: Nigerians as rejects of the world

The spate of deportation of Nigerians from abroad and the massive exodus of Nigerians yet from home through legal and illegal routes in search of a ‘better life’ have become a worrisome image liability for the country.

Nobody seems to know exactly− the number of Nigerians who have been deported from abroad in recent times – because the waves of deportation keep coming and it does not seem to stop any time soon. It will be hard to have a reliable working figure for now.

From the US, to United Kingdom, Germany, Italy, Spain, China, Saudi Arabia and to nearby Cameroon and Libya, Nigerians in high numbers, are on a daily basis being bundled into the next available aircraft as deportees over offences relating to illegal migration, passport problem, tax clearance, drug trafficking, financial fraud among many other acts that they have been notorious for. 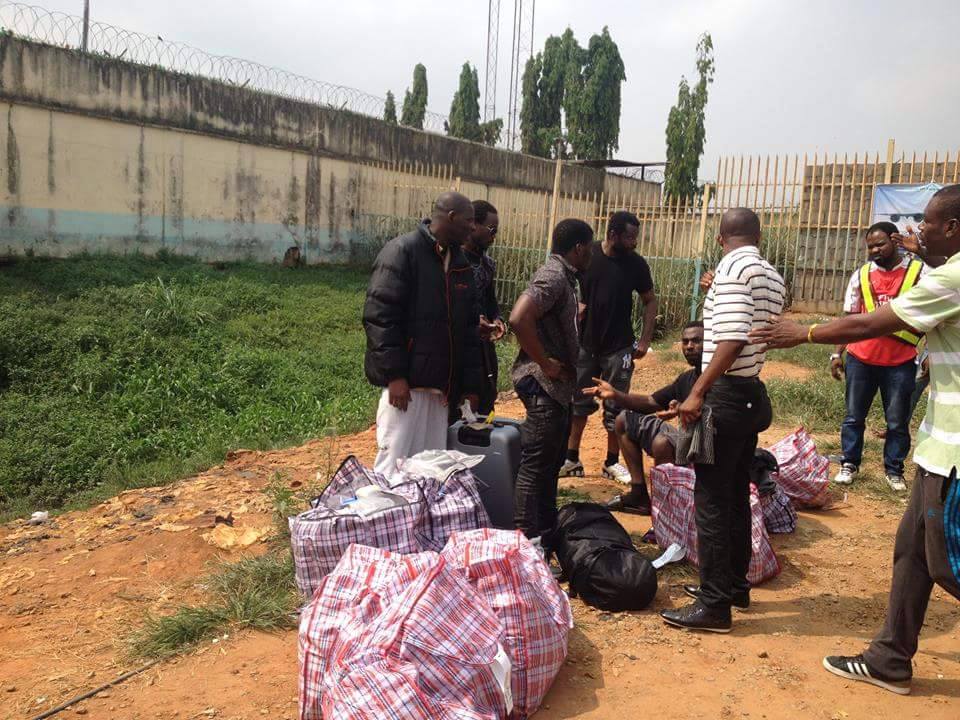 Nigerians at home woke up Wednesday, May 16, 2018 to the shocking news of plan by the German government to send 30,000 Nigerians in Germany packing− they are illegal migrants, Jan Hecker, Security Adviser to the President of Germany, told Geoffrey Onyeama, Nigeria’s Minister of Foreign Affairs in Abuja.

Daily Trust Newspaper reported that, over a thousand Nigerians were deported from various European and African countries between February 1 and April 6, 2017.

The deportees, the newspaper said, were mostly expelled from Cameroon, Libya, Italy, South Africa, United Kingdom, Mali, Austria, Belgium, Luxembourg, Hungary and Germany. In all, 1,060 Nigerians got the boot from these countries and landed in Nigeria.

Just a month after their deportation, the government of the United Kingdom (UK) deported 35 Nigerians for committing immigration-related offences in the country. The deportees were 30 males and five females.

In October 2017, a minimum of 1,549 Nigerians were sent back to Nigeria, with the exemption of the controversial 100,000 from Cameroon.

These include a minimum of 23 Nigerians deported from Spain, 187 from South Africa, 924 from Libya, 110 from Italy, 41 from the U.S, 146 from the UK and 118 from six other European countries: Austria, Germany, Hungry, Switzerland, Norway and Denmark.

Also a month before then, precisely September, Rita Orji, Chairperson, House Committee on Diaspora Affairs disclosed that 12,000 Nigerians were set to be deported from Germany. Their asylum claims were rejected by the German government, she said.

In June 2016, 41 Nigerians were deported from the United States for drug, police and immigration related offences.

The deportees, all males – nine of them were brought back for drug offences, 26 for police offences while six had immigration related problems. Another 163 Nigerians who were stranded in Libya voluntarily returned, a week before the arrival of the 41 deportees from the UK.

According to International Organisation for Migration (IOM), five chartered flights brought in 1,102 Nigerian. Since the launch of IOM’s humanitarian voluntary return programme funded by the EU-IOM Joint initiative for the protection and reintegration of migrants in the country on May 20, 2017 more than 7,600 Nigerian migrants had returned home. 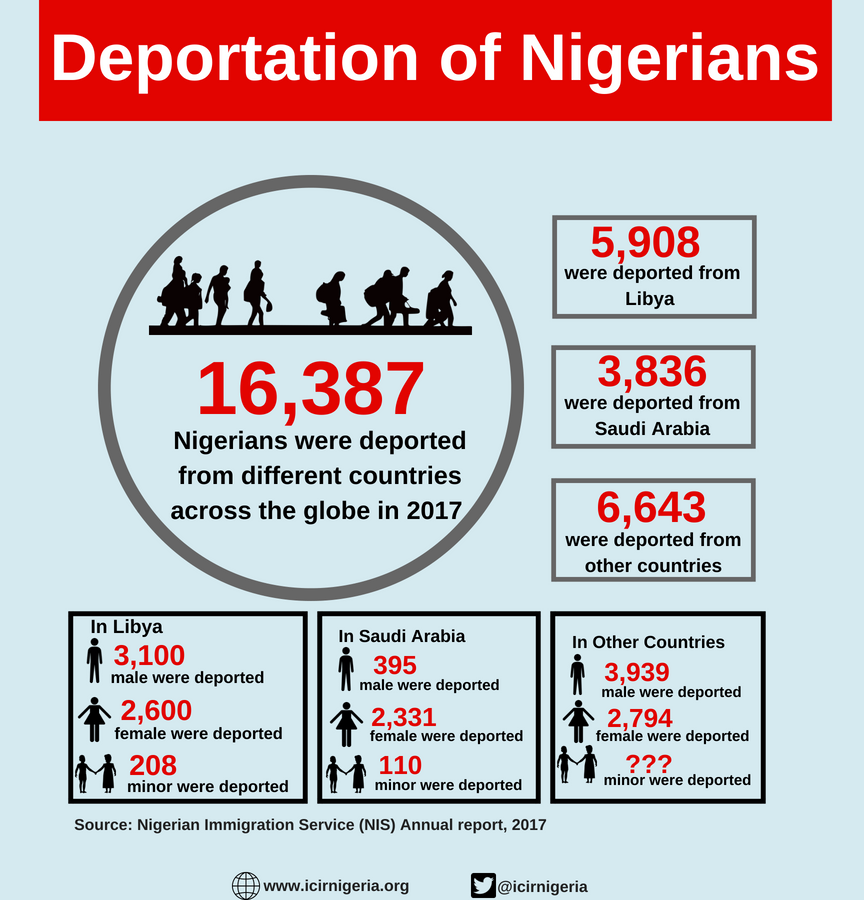 Thus, in 2017 alone, over 22,244 Nigerians were deported from different of the world to Nigeria. This figure does not include 16,387 released by the Nigeria Immigration  Service (NIS) as the number of Nigerians deported from different part of the world. Of this, 5,908 were returned from Libya − 3,100 were male while 2,600 were female and 208 minors.

More worrisome is the determination of Donald Trump, President of the US to send thousands of Nigerian children and Nigerians, he said have finished schooling but refused to go back home, out of America.

If Trump succeeds in repealing of the deferred action for childhood arrivals (DACA) policy, thousands of Nigerian children in the US face possible deportation.

DACA is an American immigration policy set up by the Barack Obama administration in 2012. It has protected nearly 800,000 young undocumented immigrants brought to the US as children.

Thousands of Nigerian children immigrants are currently being protected by the policy.

Jeff Sessions, US attorney general, announced that “the program known as DACA that was effectuated under the Obama administration is being rescinded”.

The US President has never hidden his disdain for Nigerians in the United States. During one of his campaign outings, he issued a warning that “Nigerians in the States would leave once he becomes president”, because, according to him, “Nigerians and Mexicans have taken over jobs meant for Americans, therefore, they must leave.”

The Republican Presidential Candidate of the United States of America, USA, Donald Trump, has threatened to evacuate Nigerians from the country once he becomes President.

The American Billionaire, who tagged Nigeria as a corrupt Nation, issued the threat on Sunday during a claiming that: “Nigerians and Mexicans have taken all the jobs meant for honest hard working Americans.”

“Why can’t they stay in their own country? Why? I’ll tell you why. Because they are corrupt.

“Their Governments are so corrupt. They rob the people blind and bring it all here to spend and their people run away and come down here and take our jobs.

“We need to get the Africans out. Not the blacks, the Africans. Especially the Nigerians. They’re everywhere.

“We can’t have that! If I become president, we’ll send them all home. We’ll build a wall at the Atlantic Shore.

“Then maybe, we’ll re-colonize Africans because obviously they did not learn a damn thing from the British.

“I went for a rally in Alaska and met just one African in the entire state. Where was he from? Nigeria! He’s in Alaska taking our jobs. They’re in Houston taking our jobs,” he said at a rally held at Wichita, Kansas.

Sadat Hassan, Deputy Comptroller of the Nigerian Immigration Service (NIS), said that 90 percent of illegal immigrants seeking asylum status are regularly rejected by European countries. This is why they are deported enmass.

WHY NIGERIANS ARE LEAVING NIGERIA

Despite the daily staggering figures of Nigerians who are perishing in the Mediterranean sea and the Sahara Desert while trying to cross to Europe through illegal routes, thousands of Nigerian youths are either departing the country in search of greener pasture.

Femi Awoniyi, Project Director of Migration Enlightenment Project Nigeria (MEPN)  in 2017 disclosed that at least 2,500 migrants  perished in the Mediterranean Sea while many others were believed to have died traveling across the Sahara Desert or in transit countries such as Libya. He said the figures were from IOM.

Poor state of infrastructure, insecurity and poor living standard as well as unemployment keep driving many abroad to seek asylum and also take on menial jobs even when conditions attached to moving abroad and securing jobs are unfavourable.

Illegal migrants from Nigeria account for 21 per cent of the total 171, 299 immigrants that braved the Mediterranean odds to arrive Italy in 2016.

Figures from the Italian Interior Ministry estimated the record Nigerian arrivals at 36,000, with most of them claiming they were running away from Boko Haram insurgency or Niger Delta crisis.

The estimate was as at November 2016.

Though life is not as easy abroad as many who desperately exited Nigeria always thought, poverty remains the number one reason a lot of Nigerian youth want to migrate to any country, even if it is not as prosperous as Nigeria.

From trained professionals such as medical doctors, nurses, artisans, sporting personalities and to unskilled individuals, the quest for life abroad underscores the failure and breakdown of key socio-economic systems in the country.

For many in this drive for greener pasture, it is better to die while trying to go abroad or even die abroad as illegal immigrants than to continue to face the situation back home in Nigeria.

Nigeria’s image abroad is synonymous with fraud, drug trafficking, prostitution and of late, sale of human organs − no thanks to many Nigerians abroad whose activities have given this image to the country.

But the vast majority of these Nigerians who often end up as deportees are youthful persons under 45 years of age. The implication is that the inability of the government to plan and accommodate the needs of its growing  population has turned Nigerians to become a major source of nuisance to the world beyond the shore of the country.

Besides medical doctors and other professionals who have over the years earned their stay abroad and are working legitimately, many migrants from Nigeria are women who are sexually abused by their sponsors and are compelled to engage in prostitution.

Others are young men who now sell their internal organs such as kidneys which are being given to sick people in countries such as China and Malaysia. The trade is a money spinner in these Asia countries due to the high rate of chronic kidney disease and there is no law against it. And Nigerians abroad are the willing sellers.

Since 2012, Nigerian youths abroad have reportedly been selling their kidney in Malaysia, India, China and other Asian countries for N10 million. Yahoo-Yahoo boys are said to be the ones mostly involved in this trade, probably after realising that cyber-fraud was not as lucrative as it used to be.

In Malaysia alone, there are about 2,500 cases of kidney failure yearly while in China about 1.5 million people are reportedly in need of organ transplants, but that only 10,000 were performed yearly, thus fueling an illegal trade in organs.

The illicit trade has fueled the craze by Nigerians to migrate to these countries regardless of the health risks associated with the sale of organs without proper medical procedure and adequate post-sale medication.

But what is yet to be be seen is the political will of the Nigerian government to make  Nigeria a home for its citizens who would not have to seek refuge in countries where they are not welcome.