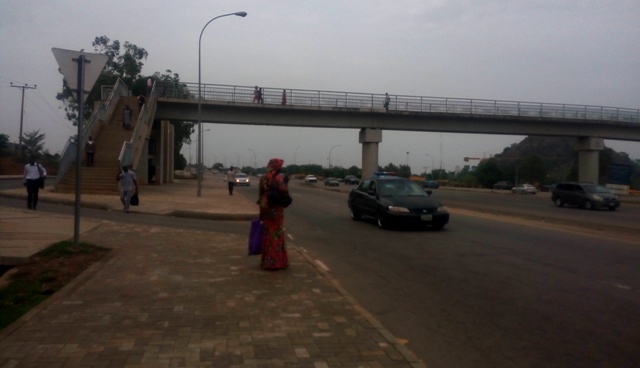 
Nkechi Ukwuoma (not real names) was buried on Monday, May 14, 2018.  A retiree, Nkwuoma was knocked down at the popular Area 3 junction in the Garki district of Abuja by a hit-and-run  driver.

She had just left her house  at Area 2  on a Sunday evening in April to meet her relative who was visiting Abuja for the first time. It was on their way back, that she got knocked down. The person she had gone to receive, being younger, was able to cross faster and so escaped death by a whisker.

A few yards from where the accident occurred, was a pedestrian bridge constructed by the Federal Capital Territory Administration (FCTA), to prevent jaywalking.

Jaywalking is the technical term referring to the act of crossing a major road illegally, i.e. without adhering to traffic regulations.

“There’s no week that passes without at least one person being knocked down along this road,” a commercial driver, Tunde, told ICIR.

“Just yesterday, I nearly knocked a woman down,” he continued. “The woman had hesitated to cross, but her son pulled her along but she was already late. She just managed to jump past a Hilux truck and if I hadn’t applied my brakes just in time, I would have knocked her down.”

Road accident is a frequent occurrence in Abuja, and the official of the city are aware of the problem.   Ifeanyi Ughammadu, Public Relations Officer at the FCTA transport secretariat, admitted this much, but he was reluctant to give detail because he had no authorisation to speak.

KILLED UNDER THE BRIDGE

Another official of the FCTA transport secretriat narrated an incident she witnessed along the Airport road.

She said two friends were about to cross the road but were arguing whether or not to make use of the popular car wash pedestrian bridge at Lugbe.

One was adamant and opted to cross, telling his friend that they would meet at the federal housing estate junction. But as he made to run through the third lane of the expressway, he was swept off by an oncoming vehicle which also ran him over.

“His bones were scattered all over the road, I couldn’t believe it,” she said, her face contorted in shock

“You needed to see how his friend was crying and saying ‘I told him that we should climb the bridge.’”

WHY ARE PEOPLE RELUCTANT TO USE PEDESTRIAN BRIDGES?

“The bridges are very far from the junctions,” said Amaka, a resident of Abuja who spoke with ICIR. “Instead of trekking for several minutes under the sun, and then climbing up and down the bridge, abeg person go just run across in less than one minute.”

Asked if she is concerned about getting knocked down by impatient driver, “I no get eyes? You have to look carefully before you cross now. You don’t just run into a major road like that,” Amaka retorted.

This reporter put Amaka’s claim to the test, by timing the walk from the Finance Junction, along the Area 1 – Berger road, to the nearest pedestrian bridge. It took exactly four minutes, 21 seconds of casual walking.

Other people interviewed by ICIR  also harped on the danger of passing through pedestrian bridges, especially in the night. A colleague of this reporter narrated how he saw a trail of blood along one of the bridges on his way to work one morning. “Certainly, someone must have been stabbed there last night,” he said. 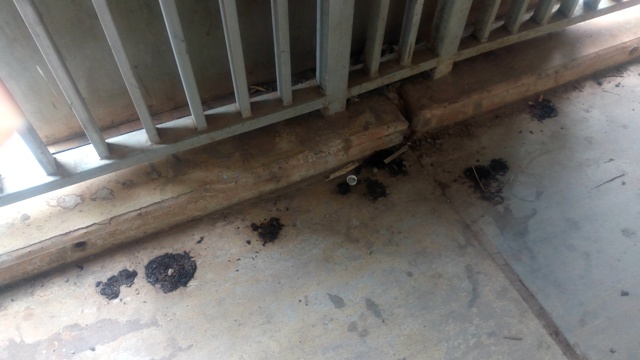 Most of the pedestrian bridges in Abuja are not adequately lighted. The ones that have sections where persons on wheelchair can use are a perfect example. Those sections have turned to latrines where passers-by and beggars answer the call of nature.

At night, no one would dare go that way.

Some of the bridges, especially those located near a popular junction, are turned into big markets at dusk.

The Galadima bridge, along the Kubwa expressway, is one of such cases. Household items of various kknds are sold on the bridge; ranging from food, clothing, to cheap mobile phones and others.

Hence, the  bridge is always crowded and the pedestrians can only navigate through the narrow space left by  traders who display their wares on a better part of the bridge. To avoid the chaos, some  pedestrians avoid the crowd and opt to jaywalk.

Ughammadu, the transport secretariat spokesman, said the FCT administration was aware of the development and had been trying its best to stop it.

“If you pursue them today, tomorrow they will come back,” he said. “We have even asked the police to arrest them, but after they were arrested, under which law do we try them?

“In Lagos, there are such laws. Once someone is caught crossing the road, he is made to pay a fine or sent to prison, but here we have no such laws.”

The absence of an enabling law to try certain offences in the FCT could be due to the fact that the territory, unlike other states of the federation, has no legislative house of its own.

The federal House of Representatives also serves as the lawmaking body for the FCT, hence the delay in the quick enactment of necessary laws.

According to data from the 2016 annual report of the Federal Road Safety Corps (FRSC), 5,053 fatalities were recorded in the country as a result of road crashes, a 7.7 percent reduction from the figure of 2015.

However, the report stated thus: “Pedestrians are particularly vulnerable with children accounting for around 40 percent of all fatalities.”

According to the Nigerian Bureau of Statistics, 1,253 persons were involved in auto accidents in the FCT in the last quarter of 2017. Of this number, 449  were injured and 54 people were killed. A good number of these were jaywalkers.

Many believe that the FCT has a lot to learn from Lagos State when it comes to enforcement of the usage of pedestrian bridges.

“In Lagos, the fear of LASTMA (Lagos State Traffic Management Agency) is the beginning of wisdom,” Ogbaegbe Chinedu, a former corp member  of NYSC in Abuja said.

“You dare not cross the road anyhow and drivers don’t just stop at any point they want along the road either to drop or pick passengers. There are designated bus stops and pedestrians take the bridges.

“But in Abuja, even when there are barricades to prevent people from running across the roads, in a few days, they are broken,” he said.

A previous ICIR investigation has also revealed how criminals vandalise bridge rails, manhole coverings, solar panels and so on, carting them away, perhaps to be sold in metal scrap markets.

COVID-19: How Abuja residents spend hours to conduct test at…