#ENDSARS: Company, whose store got looted by hoodlums in Lagos tasks Nigerians to be focused 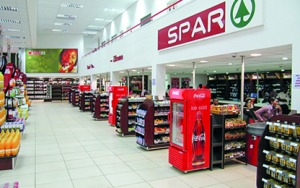 SPAR Nigeria, a chain of supermarket and department store, whose store was looted in Lekki by hoodlums who have hijacked the #ENDSARS protest to cause mayhem in Lagos State, has tasked Nigerians to be focused.

Announcing the vandalization in a Twitter statement on Thursday, the company said the incident was only a setback, compared to the myriads of issues confronting the nation.

While expressing its solidarity with Nigeria, it called on Nigerians to be the change they want.

“Our Lekki store has been vandalized and looted. But, we acknowledge that this is only a setback compared to the larger issues we are all facing as a nation, and our thoughts and prayers remain with Nigerians everywhere, and for a peaceful resolution to various issues at hand,” it said.

“Rebuilding a supermarket is hard. Rebuilding a nation is even harder. We stand with you Nigeria. Stay focused. Be the solution.”

Rebuilding a supermarket is hard. Rebuilding a nation is even harder. We stand with you Nigeria.

#ENDSARS protest, since it started two weeks ago, has witnessed a handful of violence in some states in the country with public buildings and private properties being vandalised and destroyed by hoodlums.

Following the shooting of unarmed protesters by the men of the Nigerian Army in Lekki tollgate on Tuesday night, some hoodlums set the building housing the headquarters of the Nigeria Port Authority in Lagos ablaze.

The hoodlums also set ablaze, a BRT station with buses, a television station, TV Continental (TVC) and a building housing The Nations Newspapers.

Governor Babajide Sanwo-Olu mother’s house in Surulere was also set ablaze while the Oba of Lagos’s palace was invaded, ransacked and his staff of office was allegedly taken away.

President Muhammadu Buhari while expressing his dissatisfaction with some of these violence in his address to the nation on Thursday, said such actions will no longer be tolerated by his administration.

Buhari urged the youths in the country to take advantage of his well thought out initiatives by his administration to make their lives better.

“In the circumstances, I would like to appeal to protesters to note and take advantage of the various well-thought-out initiatives of this administration designed to make their lives better and more meaningful, and resist the temptation of being used by some subversive elements to cause chaos with the aim of truncating our nascent democracy.

“For you to do otherwise will amount to undermining national security and the law and order situation. Under no circumstances will this be tolerated,” he said.

Lekki Shooting: Nigeria defence says ‘analysis has shown it may not be true’