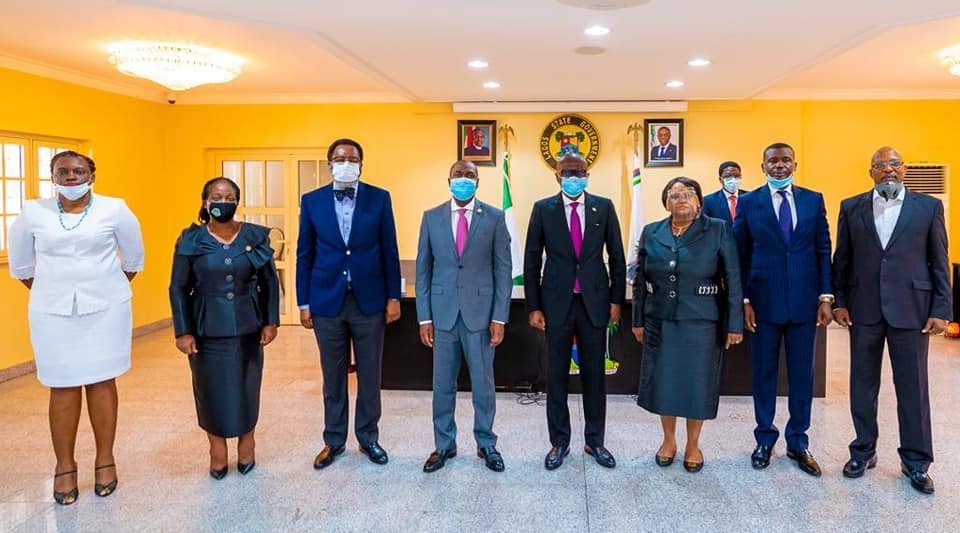 Babajide Sanwo-Olu, the governor of Lagos State, has appealed to the youths demonstrating against police brutality in the State to embrace dialogue for the resolution of their agitations.

Sanwo-Olu said on Monday, that the state government had shown sincerity and willingness to address all concerns raised by the protesters, given the actions taken so far, including the constitution of the Judicial Panel of Inquiry and setting up of compensation funds for the victims.

Sanwo-Olu made the appeal during the swearing-in of members of the Judicial Panel of Inquiry and Restitution at the State House in Marina.

The Governor’s appeal came on the heels of the violent dimension assumed by the #ENDSARS protests in some parts of the State.

Reiterating his solidarity with the protesters’ demands, Sanwo-Olu said the pain expressed and concerns raised were genuine and legitimate. This, he said, prompted the Federal and States’ governments to immediately acquiesce to some of the demands, while setting process in motion to implement other changes demanded.

The Governor urged the protesters to be part of the process of implementing the reforms they clamoured for in the police, stressing that continuous blocking of roads, Government and private offices would slow down the procedure of implementing their demands.

“We have shown unprecedented commitment to the complete overhaul of the Nigerian Police. The inauguration of this Judicial Panel of Inquiry is only the first step in a long line of reformative actions that will lead to a thorough revamp and reorientation of the Nigeria Police. I believe that some of the actions we have taken should, to a large extent, show our sincerity and willingness to address all your concerns,” he said.

“Let me reiterate that I am on the side of the young people out there. I understand your pain and I know your concerns are genuine and legitimate. While we are able to immediately acquiesce to some of your demands, some others will require time. We ask you to bear with us as we dutifully work on your demands.

“I will, therefore, like to renew my appeal to you to suspend the protests and create an atmosphere for the resolution of all pending demands. I encourage everyone brutalised by the disbanded SARS, including the families of those who died, to present their case before this tribunal.”

Sanwo-Olu said he believed the task of reforming the police was achievable, but required the input and cooperation of the youth to accomplish the task.

He commended the cohesiveness of the “resilient” young people who stood their ground in the last two weeks. Their tenacity, Sanwo-Olu said, has made the much-desired change in the policing system become inevitable.

Speaking about the judicial panel, the Governor said he was convinced that its outcome and recommendations would open a new chapter in police-citizen relationship.

He promised that the State Government would ensure that all wounds are healed, justice served to victims of abuse, and guilty police officers prosecuted.

Despite video evidence, Sanwo-Olu says no death occured at Lekki tollgate during…