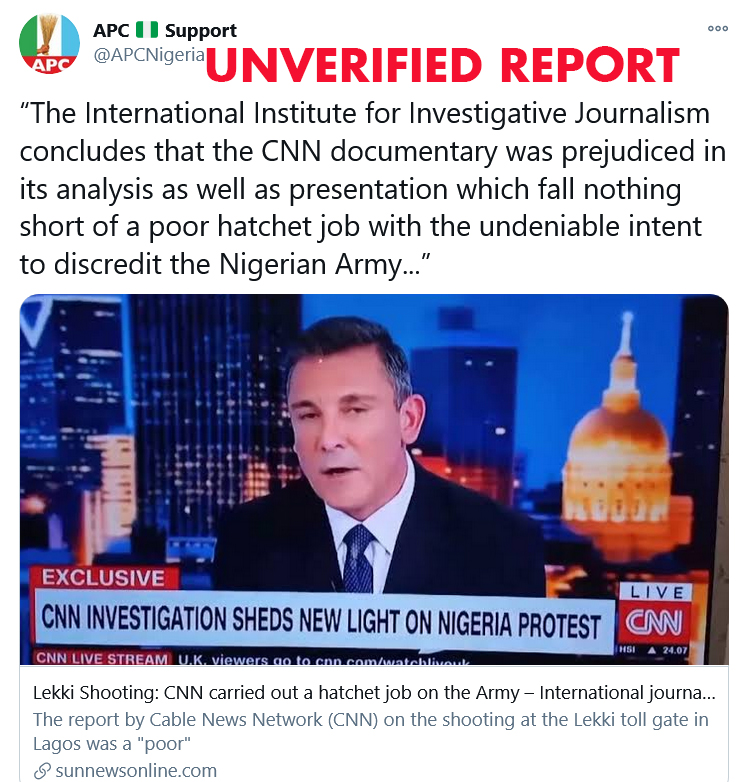 
A NON-EXISTING  journalism institute, International Institute for Investigative Journalism (IIIJ), has faulted the investigative report done by the US-based news giant, Cable News Network (CNN) on the October 20 shooting at the Lekki Toll gate in Lagos.

A report that has been widely shared on social media claimed that IIIJ, which did not exist until 24 hours ago, issued a press statement saying CNN report was “poor” hatchet job targeted at the Nigerian Army.

In an electronic statement signed by, Francois Deburoiche, its special rapporteur on Wednesday, the IIIJ said it came to this conclusion following a careful investigation on the events that led to the escalation of violence at the toll gate.

Checks by The ICIR however, showed that Francois Deburoiche is a pseudonym and the only reference to that name on the internet is in the press statement issued.

Also, the body that is supposedly international has no digital footprint on the internet- it has no website, nor any social media accounts such as Twitter and Facebook to identify them with.

Further checks by The ICIR revealed that an account associated with the ruling party in Nigeria, the All Progressive Congress (APC), on Twitter shared the report published by The Daily Sun newspaper from the press statement issued by the non-existing journalism institute, a report that was later deleted on the website of the newspaper due to lack of verification.

In a phone conversation with an official of Daily Sun newspaper who declined to be named, it was confirmed to The ICIR that the report was pulled down due to lack of verification of source of the press statement.

“We pulled the story down because there were no fact and the reporter will receive a query for the report,” Daily Sun disclosed to The ICIR.

Tribune Online, a Nigerian newspaper also published the unverified report condemning CNN’s report on Lekki shootings and as at the time of filling this report, the story is no  more on the website.

Meanwhile, Nigerians on social media have also doubted the existence of the group that faulted CNN’s report.

A Facebook user identified as Abdul Jimoh, ” Tuale to the International Institute for Investigative Journalism for rubbishing the CNN in the eyes of the international community.”

Abdul in the post, demanded for IIIJ’s office and the investigative reports they’ve done in the past.

A Twitter user identified as Leon Ikechukwu said in response to APC Support tweet on the IIIJ press statement, “Used Google, Bing, and Duck Duck Go, and I never saw anything relating to an International Institute of Investigative Journalism. This is quite shameful, that you guys would have to resort to fiction to drive your agenda.”

From the reports gathered by The ICIR and checks online, we can say authoritatively that the International Institute for Investigative Journalism (IIIJ), does not exist and the press statement issued is fake.