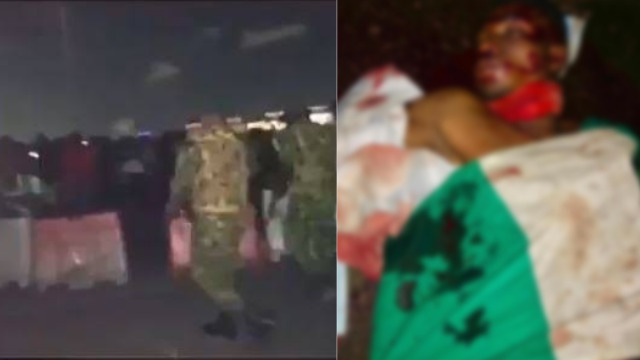 FOLLOWING release of evidence that men of the Nigerian Army in fact fired live bullets and killed peaceful protesters on October 20, in Lekki toll gate plaza area of Lagos, many Nigerians have taken to social media to condemn the military authorities.

The Cable News Network (CNN) investigation which was released on Wednesday – exactly four weeks after the incident that left at least a dozen Nigerian youths dead – has sparked outrage over how the government met peaceful #EndSARS protesters with brutal force, in an attempt to quell the demand for an end to police brutality and bad governance in Nigeria.

“My heart curses all (including my uncles) who said #LekkiMassaccre didn’t happen. The CNN video is really sad to watch. Another sad thing is how helpless we are as Nigerians,” a Twitter user identified as Blue Natural shared in a post.

Another Twitter user identified as Ehizoba Archibald  said: “The government is shocked by the CNN news today. They should be holding emergency meeting to think of how to quell down the uprising agitation. They will start forming serious with ASUU again. But the truth must prevail.. Intimidation would only worsen things.”

Directing his anger at the Nigerian government, one Twitter use simply identified as Eddy said: “You know what’s great about the CNN #LekkiMassacre footage? There is more where that came from. Every now then, an exclusive will be released for the world to see how shameless the Nigerian Government is.”

One Jerry on Twitter expressed sadness that it appears there is a constant attempt to conceal the truth.

“The #LekkiMassacre hits differently after watching the CNN video…The Nigeria govt tried to bully everyone but the truth came out eventually,” he shared in an impassioned post.

More concerned about safety, another Twitter user said: The @CNN #LekkiMassaccre investigation clip keeps popping up on the TL and eventually, I caved in. Tears! Fears! Oh God! I have kids. Is living too much to ask for? Haba!”

While many express fear, sadness and disgust over the truth of the incident of that day, some have characterised the attitude of the Nigerian government as a shameful display.

Dr. Olaleye, another Twitter user expressed this n a tweet in which he said: “After watching the CNN report on #LekkiMassaccre I must say, I have never been more embarrassed about Nigeria. Extremely shameful that @jidesanwoolu is still the gov of Lagos. To think people tried to cover the story is infuriating.”

Working with the Balkan Investigative Reporting Network, CNN established that several of the bullets from the Lekki tollgate originated from Serbia, and were used by Nigerian soldiers who carried out the operation shortly after leaving Bonny Camp barracks, Victoria Island on that day.

The Nigerian and Lagos State government have in several reports and interviews tried to distort the facts of the incident. The Army in its initial first response denied ever being present at the location of the incident – a lie that has been punctured with several evidences including an admission by the Army that its men were present but only used rubber bullets to disperse protesters.

Babajide Sanwo-Olu, the governor of Lagos also claimed in an interview with CNN that there are no fatalities from the shooting – another lie that has been debunked with evidence and time-stamped videos.

In an earlier released report, Premium Times, a Nigerian media organization had revealed that soldiers and policemen shot at the peaceful protesters and killed many youths.

Through pictorial and video evidence including eyewitness accounts, the newspaper established the fact that many lives were lost through gunshots, while many others sustained gun wounds.

The Nigerian government, despite several evidence continues to deny the incident till this day.

Lekki Shootings: We stand by our report, CNN replies…