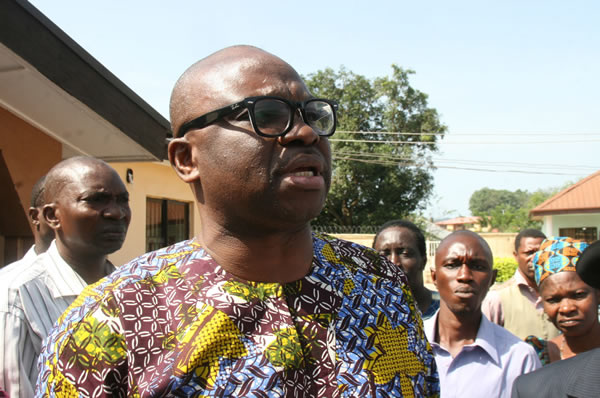 The Ado-Ekiti branch of the Federal High Court has fixed December 2 for judgement on the freezing of Governor Ayo Fayose’s Zenith Bank accounts by the Economic and Financial Crimes Commission, EFCC.

Justice Taiwo Taiwo’s order on Monday, in Ado Ekiti, followed the adoption of written addresses and other evidences by parties involved in the suit.

Two of the Governor’s Zenith bank accounts were frozen by the EFCC on June 20 following investigations into an allegation of corruption against the governor and some of his aides.

As a result, Fayose’s counsel, Mike Ozekhome, SAN, approached the court asking it to order the first respondent, EFCC, and the second respondent, Zenith Bank, to immediately lift the freeze order on the accounts.

Ozekhome described the action of the EFCC in freezing Governor Fayose’s personal bank accounts as illegal, unconstitutional and an infringement on the Fundamental Rights of his client.

The senior advocate stated that the EFCC had contravened Section 308 of the 1999 Constitution of the Federal Republic of NIgeria, as amended which granted immunity to a sitting governor against prosecuting in either civil or criminal matters.

Ozekhome also wants the court to award damages in favour of his client.

However, counsel to EFCC, Rotimi Oyedepo, told the court that the commission had acted within its statutory and constitutional powers as provided for in Section 6(5)(b) of the Money Laundering Prohibition Act,2011.

He stated that every action or step taken against the applicant by the commission was done in accordance to Sections 19, 34 of the EFCC Establishment Act.

“By the provision of these sections, EFCC has power to instruct Zenith Bank to place a “Stop Order” on the account suspected to be proceeds of alleged crime,” he said.

It would be recalled that the EFCC ordered the freezing of Fayose’s account on the allegations that he had collected huge sums of money from the former National Security Adviser, Sambo Dasuki, who is currently in custody for corruption.

The anti-graft agency said the money was handed over to Fayose through the former minister of State for defence, Musiliu Obanikoro, who is currently aiding the commission in its investigations.

Obanikoro was over the weekend granted administrative bail by the EFCC after spending several days in custody, and eventually returning the sum of N100 million to government coffers.