With this appointment, Kyari joins the long list of Nigerians who had held sway at the NNPC since Nigeria’s return to civil rule in 1999.

The ICIR profiles the eleven Nigerians who have managed Nigeria’s state-run oil firm from 1999 to date.

Gaius-Obaseki served as Group Managing Director of the Nigerian National Petroleum Corporation, NNPC, from May 1999 to November 2003. He hails from Edo State and graduated from the University of Ibadan, having studied Geology.

He joined the NNPC in 1972 and rose through the ranks until he was appointed Group Managing Director of the corporation in 1999.

Obaseki changed NNPC’s external oil marketing strategy and, acting on President Obasanjo’s order, he announced the cancellation of all annual sales contracts for crude oils and fuel oil. Obaseki’s aim was to cut out the middlemen and limit term contracts to bona fide end-users and large volume traders.

Born in 1947, he holds a first degree in Mechanical Engineering from the University of Lagos where he studied as a Shell scholar in 1971.

He was instrumental in developing a fiscal policy document famously known as MOU, to salvage the economy when a crash in oil Organisation of Petroleum Exporting Countries, OPEC,  price structure resulted in low prices.

The structure guaranteed a steady income for the country and encouraged operations to thrive for the low operating cost to promote efficiency in the industry and earnings from oil operations.

Appointed as Special Assistant to President Olusegun Obasanjo on Petroleum Matters in 1999, he was subsequently appointed the Group Managing Director of the Corporation in 2003 to drive the reform of the oil & gas sector until he was relieved of his appointment in 2007. 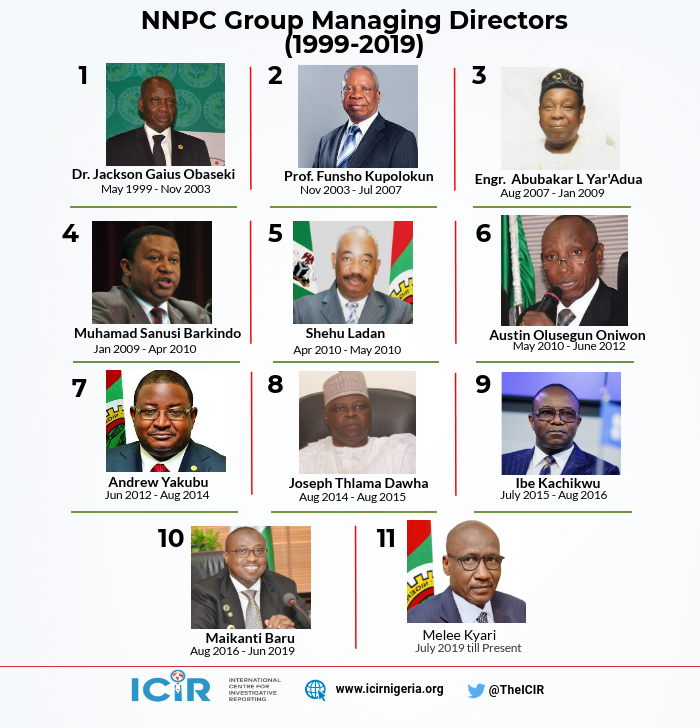 Abubakar Yar’Adua was born in July 1949 in Katsina State. He never worked anywhere outside the NNPC after joining the Corporation as a member of the National Youth Service Corps, NYSC, at the Kaduna Refinery and Petrochemical Company, KRPC, in 1976.

A graduate of Chemical Technology from Sofia University, Bulgaria in 1974, from where he also obtained a Masters degree in 1976. Yar’Adua rapidly rose to become Executive Director of KPRC in August 1995 and then Managing Director from June 1999 to January 2000.

He was the Executive Director, Refining and Petrochemicals of the NNPC before he was appointed to run the affairs of the corporation.

Born in April 1959. Barkindo who hails from Adamawa State bagged a bachelor’s degree in Political Science from Ahmadu Bello University in Zaria, and a master’s degree in Business Administration from Southeastern University in Washington, DC.

He served as Deputy Managing Director of Nigerian Liquefied Natural Gas, a joint venture between NNPC, Shell, Total and Eni. Earlier in his career, he was Special Assistant to former Minister of Petroleum Resources and OPEC Secretary General, Rilwanu Lukman.

Barkindo also worked in several key roles at OPEC between 1986 and 2010. In 1986, he was appointed to Nigeria’s delegation to OPEC, and from 1993 to 2008, served as Nigeria’s National Representative on the Organization’s Economic Commission Board.

He holds the reputation as the shortest tenured GMD of the NNPC, considering he was fired 7 weeks after his appointment by President Goodluck Jonathan.

After his call to the Nigerian bar, Ladan’s NYSC primary assignment was the State Ministry of Justice, Kano. He proceeded to serve as Staff Solicitor of the Federal Mortgage Bank of Nigeria. He was also Legal Adviser Kaduna State Rural Electrification Board, REB, and Assistant Director Federal Legal Aid Council of Nigeria, Jos.

Ladan was appointed as Commissioner of Education in 1987. In 1989, he was appointed Attorney General and Commissioner for Justice. He moved to the oil and gas sector in 1990 where he held various positions then rose to become NNPC’s Group General Manager of Human Resources in 2004.

In 2006, he was appointed the Deputy Managing Director/CEO of Nigerian Liquefied Natural Gas, NLNG, Ltd, a joint venture company that has NNPC, Shell, Total and Agip as shareholders.

In April 2010, he was appointed the Group Managing Director of the NNPC after he took a brief recess from the industry.

Oniwon who hails from Kogi State was born on April 1, 1951. He holds a bachelors degree in Chemistry from the Ahmadu Bello University, Zaria.

He started his working career with the NNPC in 1977 and rose to become Head of Planning at the Warri Refining and Petrochemicals Company in 1987. From 1988 to 1991 he was the technical assistant to the Group Executive Director, GED, Downstream and later Head, Engineering and Technical Services Department, ETSD, of Kaduna Refining and Petrochemicals Company from 1991-1992.

He was appointed GMD of the NNPC in May 2010 and retired having attained the mandatory retirement age of 60 in 2011.

Yakubu was the 15th NNPC chief. He was a 1979 graduate of Chemical Engineering from the Ahmadu Bello University, ABU, Zaria and joined the NNPC after completion of his youth service programme.

He rose through the ranks to become Managing Director of Warri Refining and Petrochemicals Company and GED in charge of Exploration and Production. He is an indigene of Kaduna State and a Fellow of the Nigerian Society of Engineers, NSE.

Under his watch, the NNPC went through a series of corruption allegations that threatened its integrity and accountability as a state-owned oil company.

Joseph Thlama Dawha served as Group Managing Director of the NNPC until August 2015. He had also served as acting GED of Exploration & Production at Nigerian National Petroleum Corporation in March 2014.

Dawha served as the Managing Director of Integrated Data Services Ltd, IDSL, since 2005. He hails from Borno State and served at IDSL diligently over the years in various capacities, in the upstream and downstream sectors of the industry.

He was born in December 1956, in Onicha-Ugbo, Delta State. Kachikwu is a graduate of the University of Nigeria, Nsukka, and Nigerian Law School. Also, he obtained a Master’s and Doctorate Degree in Law from Harvard University.

Ibe Kachikwu has 30 years of experience in various management positions in the oil industry. He was also a general counsellor ExxonMobil in Nigeria. Ibe Kachikwu was appointed as the Nigerian National Petroleum Corporation Chief Executive in August 2015.

Born in July 1959, he hails from Jama’are in Bauchi State. He attended Ahmadu Bello University, Zaria, where he obtained a Bachelor of Engineering (Mechanical) with first class honours. He also bagged a Ph.D. in Mechanical Engineering.

He served as director of the NNPC-owned Carlson Services, UK, Limited between December 2004, and January 2007. He was appointed Special Adviser (Upstream) to the Minister of State for Petroleum before been elevated to the position of GMD of the NNPC.

Kyari is the 19th GMD of the NNPC with outfield pedigree in petroleum economics and crude oil and gas trading.

He had a bachelor of science B.Sc degree in Geology and Earth Science from the University of Maiduguri. He completed his youth service as a Well Site geologist with the Directorate of Foods, Roads and Rural Infrastructure, DFRRI, between 1987 and 1988.

Between 1988 and 1991, he worked with the Nigerian Geological Survey Agency before joining the NNPC subsidiary, Integrated Data Services Limited, IDSL, where he worked as a Seismic Data Processing Geophysicist in the Data Processing Department.

In 1998, he was appointed the Exploration Geophysicist Production Sharing Contract, PSC, of NAPIMS until 2004 before he was placed in charge of the Abuja NAPIMS office.

In 2006, he was appointed the Supervisor PSC, Crude Oil Marketing Department, COMD, of the NNPC, from where he rose to the position of Head, and later Manager of Production Contracts Management of the COMD between 2007 and 2014.

During the handover ceremony, he said the corporation under his leadership would make all the four refineries in the country working before 2023, a goal none of his predecessors was able to realise in their time.

Time will tell whether the new GMD will make good his promise.