THE Lagos State government has received commendation for signing a deal with Talgo, a US-based Spanish company, for the acquisition of two intra-city trains originally intended to connect Madison and Milwaukee in the United States, but which was later abandoned.

This is part of ongoing efforts by the administration to set up an intermodel transportation system that will ensure interconnectivity in different parts of the state, while reducing gridlock and creating jobs.

Governor of Lagos State Babajide Sanwo-Olu said during the ceremony in Wisconsin on Tuesday that he was ‘irrevocably’ committed to completing the Red Line Metro Rail Project by the end of this year and bring a new lease of life to public transportation in Lagos.

“We have completed the acquisition of the trains and ramping up the completion of the ancillary infrastructure like the train stations. We hope that this will be the beginning of a mutually beneficial business relationship,” the governor stated.

Chief Executive Officer and President of Talgo Antonio Perez said: “For us, it is important that our trains are utilised. It doesn’t make any good that the trains that we built should be kept without passengers riding them.”

The intra-city 10-coach metropolitan trains, newly acquired by Lagos State for its Red Line Metro Project, was manufactured in 2011 to run on Amtrak’s Hiawatha line between Milwaukee and Chicago, but the trains were never put into use after Wisconsin officials declined to build a maintenance facility to put them in operation.

In 2010, the newly elected Republican Governor of Wisconsin Scott Walker revoked the $47.5 million rail project deal which his predecessor Jim Doyle signed with Talgo in 2009. Notwithstanding, Talgo continued working on building the train sets purchased by the state at a facility in Milwaukee throughout 2011. 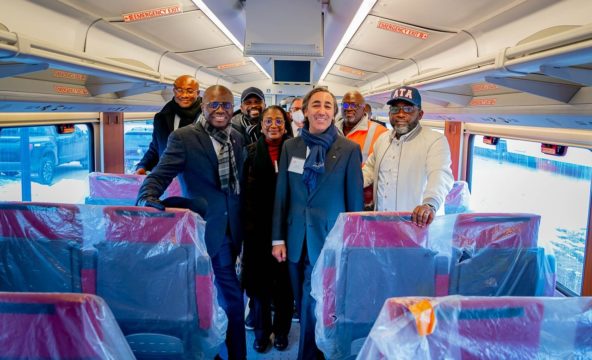 Talgo, thereafter in January 2012, notified the state that the train sets were ready for delivery, but the Wisconsin Department of Transportation refused to accept them and 10 months later, Talgo canceled its purchase contract with the state and instituted a lawsuit against Wisconsin.

The claim alleges the state failed to live up to its purchase agreement and that Walker repeatedly acted in bad faith to frustrate the deal.

However, before instituting the lawsuit in 2012, Wisconsin taxpayers had spent $42 million on the rail project. A settlement was eventually reached in August 2015 where Wisconsin agreed to pay $9.7 million to Talgo and allow the manufacturer keep the trains.

Talgo, on its part, was required to refund 30 per cent of the net proceeds if the trains were sold within three years.

The difficulties with finding a buyer

Finding a buyer for the trainsets took another six years after both parties reached a settlement, costing the manufacturer huge amount in maintenance.

Explaining some of the complexities in finding  a suitable buyer, Talgo’s Vice President of Public Affairs and Business Development Nora Friend said in 2015 that there was a limited pool of buyers.

“We have been trying for three years already and we will continue trying,” she said. “It’s a liability. We have to maintain the trains to keep them like new. We have to insure them. We have to store them.”

A major challenge was the difficulty of using federal money to buy them. The state of Wisconsin used its own money to pay Talgo for the trains, so they were not built following the Federal Government’s Buy America requirements, Friend explained.

As a result, a waiver was required to buy them  using federal money, as states had limited resources in their own coffers.

How Sanwo-Olu raised funds for the purchase

On September 14 2020, Sanwo-Olu sought the Lagos State Assembly to approve the sum of N153 billion for the construction of the Lagos Rail Mass Transit (LRMT), also known as the Red Line and the Blue Line.

According to the proposal, the sum would be sourced through Differentiated Cash Reserve Requirement (DCRR), a financing package put in place by the state government through the Central Bank Nigeria (CBN) and from intervention facilities from First Bank of Nigeria (FBN), United Bank for Africa( UBA), and Zenith Bank.

Although the cost of purchasing the train buses has not yet been made public, N93 billion of the N153 billion was proposed for the financing of the Red Line Rail Project, while the remaining N60 billion would be used for the Blue Line.

The state assembly unanimously gave its approval in October of 2020 and the 37 kilometres Red Line, a project of the Lagos Metropolitan Area Transport Authority (LAMATA) which will have eight train stations – from Agbado to Oyingbo. It is expected to be fully operational in the last quarter of 2022.

The trainsets acquired by the Lagos state government has a capacity of half a million passengers per day, provides special features for wheelchair-bound passengers,
LCD Screens in vestibules with information for passengers and automatically activated exterior and interior inter-connecting doors.

It also has comfortable and ergonomic reclining seats equipped with footrests, electrical outlets at all seats for charging laptop computers or other electrical appliances, spacious luggage rack compartments and eco-friendly vacuum toilets.