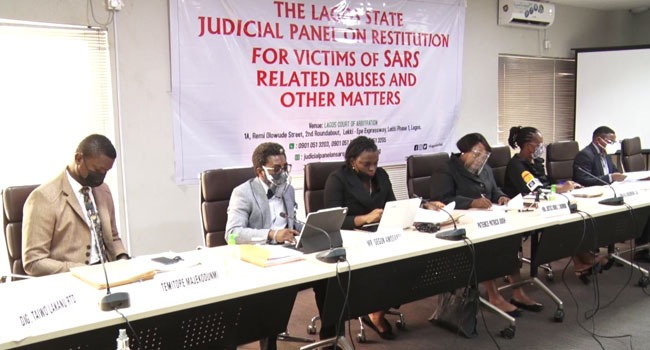 A total sum of ₦13.5 million has been awarded to three victims of Police excesses by the Lagos State Judicial Panel of Inquiry investigating abuses by members of the disbanded State Anti-Robbery Squad (SARS) in the state.

A 34-year-old trader Ndukwe Ekekwe was awarded the sum of ₦7.5m for the ordeal he suffered from men of the disbanded SARS.

Ekekwe, who had shops at Alaba International Market where he sold accessories and other general items, had told the panel how he was arrested on February 16, 2018, for crimes he did not commit.

According to his testimony before the panel, he was tortured, brutalised, and thrown down the two-story building of the shopping complex which housed his shops.

The Chairman of the Panel Doris Okuwobi, while delivering judgment on the petition, held that Ekekwe’s fundamental rights were violated under Section 34 of the Constitution.

The panel also recommended that the Police investigate and fish out its officers who brutalised Ekekwe with a view to sanctioning them accordingly.

In his immediate reaction, Ekekwe expressed displeasure with the amount awarded by the panel. He and his mother, who had been taking care of him since the incident happened, lamented that they had spent over N30 million at the hospitals and wondered what they would do with the “mere ₦7.5m awarded by the panel.”

Two other petitioners, Andrew Okoh and Isaac Adeshina, who suffered grievous bodily harm after they were shot in the leg by a police officer, were compensated with the sum of ₦3 million each.

THE Tuesday, May 24, 2022 decision by the Central Bank of Nigeria’s Monetary Policy...

THE Colleges of Education Academic Staff Union (COEASU) has issued a 21-day ultimatum to...

THE Presidency has warned against any form of reprisals in the wake of killing...
Advertisement