Many election promises of Adeshina Fagbenro and Eunice Atuejide (part 4) 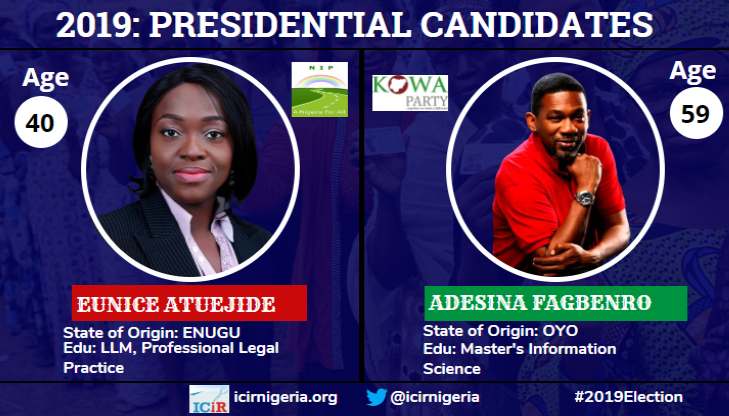 The 2019 presidential election has produced many candidates vying for the position of the number one citizen in Nigeria. And each of them is full of promises to change the lives of Nigerians within four years. Here are some of their many promises:

He was born June 5, 1959, and has a studied Economics. and obtained an LL.B (Bachelor of Laws), Master’s Information Science from the University of Ibadan, Oyo State, Nigeria. He was called to the bar at the Nigerian Law School, Lagos in 1989.

He served as an adviser in the delivery of several federal governance programs, a regional coordinator for South West and South East Nigeria as well as Head of Office, for Lagos and Enugu respectively.

“We are going to set the ball rolling with restructuring. We are going to be restructuring Nigeria. We will implement the 2014 Confab report,” he said on Channels TV Sunday Politics. His interactions and involvement in both political and non-political matters certainly, might be an added momentum for his proposed bid to implement restructuring come 2019 if he emerges as a winner.

The aspirant has also promised to declare a state of emergency on the educational sector.

On state policing, Fagbenro said he is not a big believer of centrality in security matters.  “I am in support of state policing absolutely. I support decentralisation of power.”

Five critical pillars make up his agenda for Nigeria which includes- Security and safety, health and education, environment, innovation and information and technology, infrastructure and economy. He said the beneficiaries would be the youths.

Here are the pillars of governance he stated as pirorities. Excerpts:

“Every citizen must be free from oppression and free to aspire within the law. States will be empowered to manage their own security apparatus to enforce laws.

“We will redesign our National Security architecture and system to be fit for purpose.

“Our National security policy must be based on the stated National Interest which must drive Development, Trade and Foreign policies respectively.

“Niger Delta clean-up will be pursed with a vigour not only relying on formal large-scale cleanup, remediation and restoration works but also on engaging local input into the supervision and acceleration of the cleanup. This shall form the only tax-deductible corporate social responsibility of every oil exploration and production companies working in Nigeria.

“We will grow a green belt of a variety of arid resistant plants and trees continuously across states between Sokoto and Maiduguri. This will reduce the advancement of desertification in Nigeria through effective vegetation cover for her states across the Northern borders with the Niger Republic.

“We will set up a Special Innovation Revolving Fund to finance startups in partnerships with the private sector, civil society and international agencies.

“We will reclaim the Lake Chad with the immediate commencement of the feasibility, design, mobilisation and construction of a water pipeline from the Atlantic ocean off Cross River State to Borno State to reclaim Lake Chad with the added economic externalities including desalination plants and power stations along the route.

“Ensure that all Nigerian children under the age of 18 are in school via our zero tolerance for illiteracy program.

“Increase national budget on Technical and Vocational Training by at least 35 per cent.

Graduation certificates for degree holders shall be made acceptable as collateral for Bank Loans for enterprise development.”

The 40-year- old lawyer, who hails from Enugu State, is best known for founding the youth-led, technology-driven political party known as the National Interest Party (NIP). As the presidential candidate of NIP, she has promised to conduct a total overhaul of the health insurance scheme.

“I will look into the health insurance scheme.”

Atuejide, unlike some presidential candidates, has made it clear that state policing will not be a policy she would implement among other promises. on Live TV. ” I don’t support state policing at the current state of Nigeria,” she said.

Though she said that morality in the Nigerian society does not support homosexuality but it is not an act she will criminalise. “I don’t think homosexuality is a crime. I just think it is not moral. I accept it and respect it.”

The power sector is an area of great interest to Atuejide as she has expressed concerns on commercialising the sector once she becomes the president. “I will do power as an agenda, we will make it possible for private sectors not only to  produce but transmit electricity.”

Under her official manifesto Atuejide promises:

“Access to low-cost loans to fund all forms of tertiary education for qualified young adults in Nigeria.

“Massive emancipation drive to educate and encourage youth and women participation in politics and governance.

Massive investments in vocational schools, especially in relation to the development of sports, leisure, and entertainment industries.”

Finally, she said that she would work for the government of the state that is not APC.

Nigerian politicians and their signature caps

Election: UK to deny Nigerian who incites violence even on social media visas

If I get re-elected, hard work will be rewarded adequately -Buhari

Many election promises of Donald Duke and Tope Fasua (part 3)