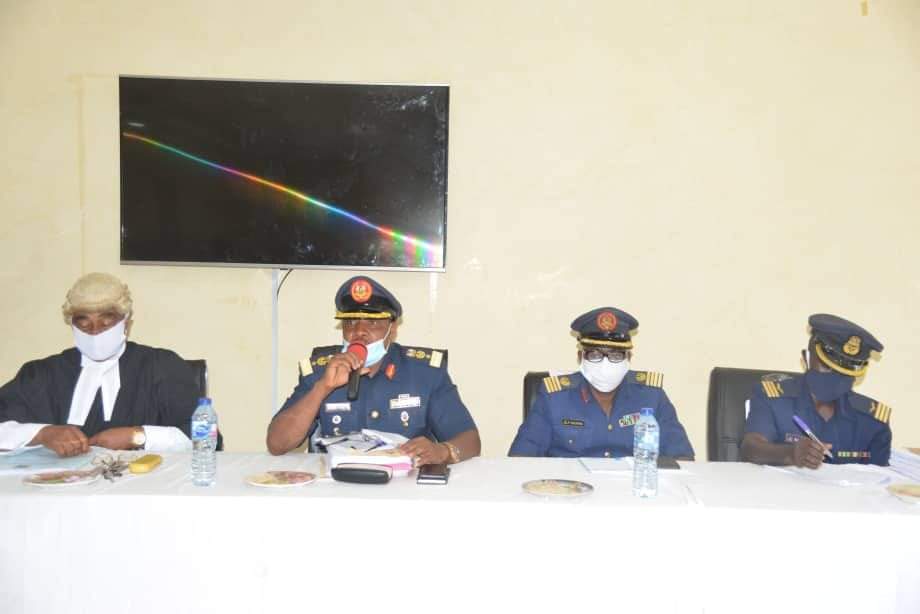 THE General Court Martial of the Nigerian Air Force has sentenced four personnel of the Force to 21-years imprisonment for offenses related to misappropriation of funds.

Ibikunle Daramola, Director of Public Relations and Information, Nigerian Air Force, who made this known in a statement on Saturday said in addition to the prison terms, three of the officers also suffered demotion for the negligence of duty.

“Four executive members of the 151 Base Services Group (151 BSG) Multipurpose Cooperative Society, Makurdi, who were standing trial before a General Court Martial (GCM), sitting at the Nigerian Air Force (NAF) Base, Makurdi for criminal misappropriation of over N41,000,000.00, were, on 24 September 2020, awarded various sentences,” Daramola said.

“The four NAF personnel, who were arraigned before the GCM for Misappropriation of Cooperative Funds, amongst other offences, include Flight Lieutenant (Flt Lt) Sherifi Olawoore, Flying Officer (Fg Offr) Ademola Adekoya, Master Warrant Officer (MWO) Michael Oyebanji and Warrant Officer (WO) Paul Atteh. The personnel were sentenced based on their levels of involvement,” he added.

According to the NAF spokesperson, Nazib Aliyu, a Air Commodore and the President of the GCM,  pronounced the four accused personnel guilty of various charges.

Olawoore who was tried for negligently performing his duty as the President of the Cooperative was found guilty and awarded six months loss of seniority.

Adekoya was tried for negligently performing his duty as Secretary of the Cooperative. He was found guilty and awarded a one-year loss of seniority.

Michael Oyebanji, who was the Vice President of the Cooperative, was tried on a 46 count charge, including; Criminal Breach of Trust, Theft, Criminal Conspiracy, Criminal Misappropriation, Making of False Documents and Conduct to the Prejudice of Service Discipline, contrary to Sections 114 and 103 (d) of the Armed Forces Act Cap A20 Laws of the Federation of Nigeria 2004 and Sections 312, 287, 96 and 309 of the Penal Code Cap P3 Laws of the Federation of Nigeria 2004.

He was found guilty on all 46 counts and subsequently sentenced to serve 21 years imprisonment, cumulatively, as well as a reduction in rank to Corporal and ordered to refund all monies misappropriated.

In the same vein, Paul Atteh, who was tried for negligently performing his duty as the Treasurer of the Cooperative as well as for the making of false documents and criminal breach of trust, was found guilty of all three charges.

He was awarded a reduction in rank from WO to Sergeant, in the first instance, and then eventually reduced to the rank of Corporal. He is also required to pay a fine of N1million.

Meanwhile, the GCM has ordered the release of WO Atteh from detention.

FG warns against NLC, TUC’s protest, says civil servants must be at their duty posts on Monday